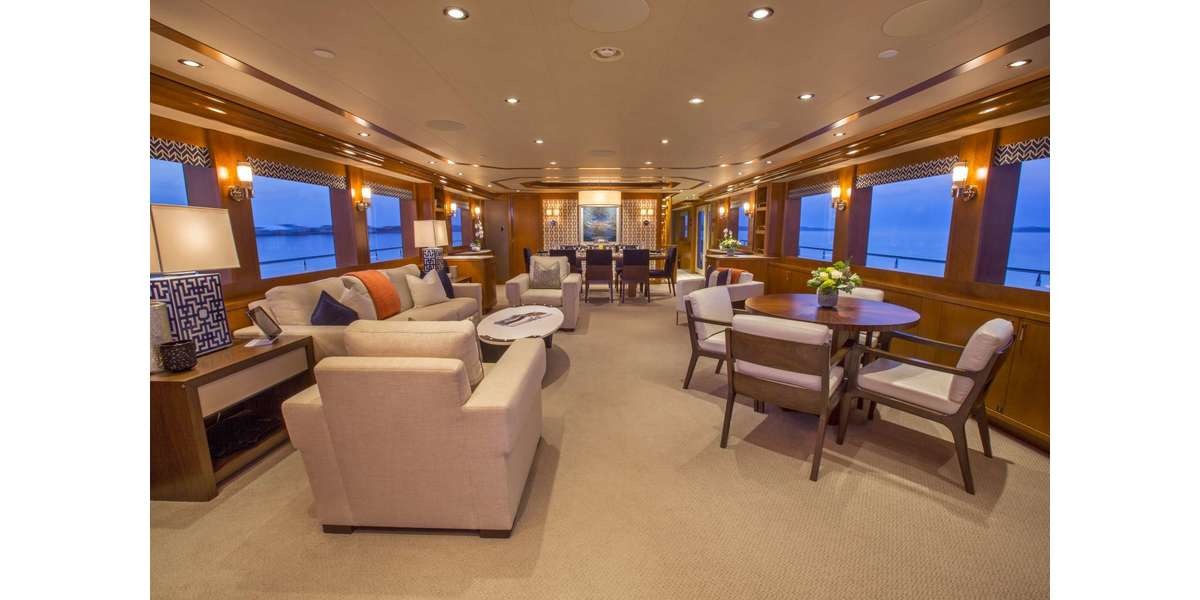 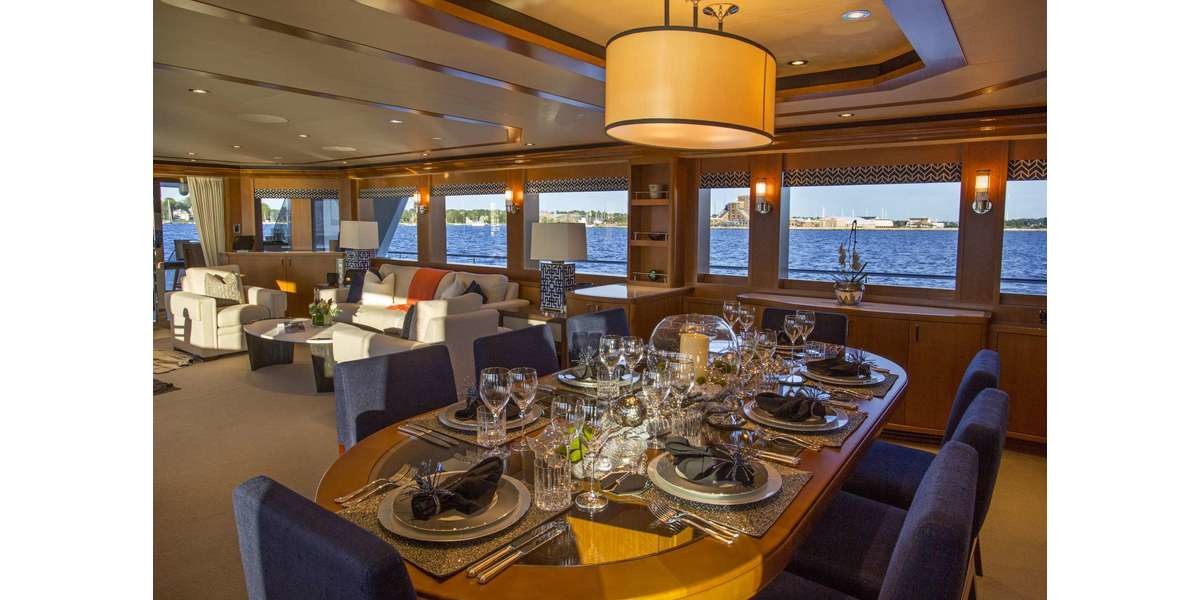 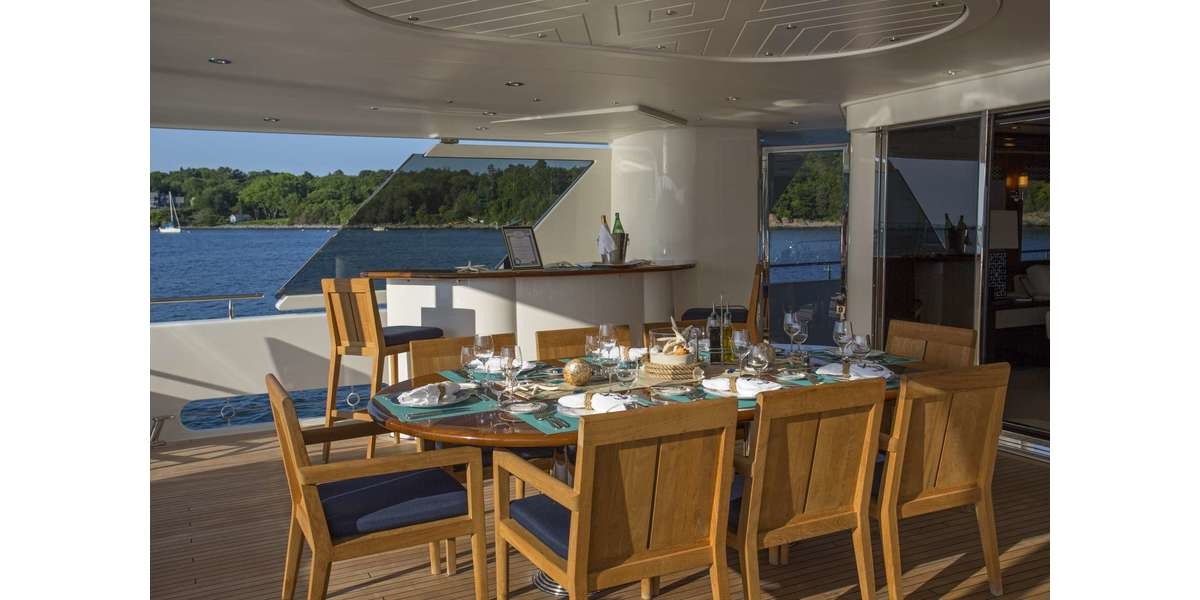 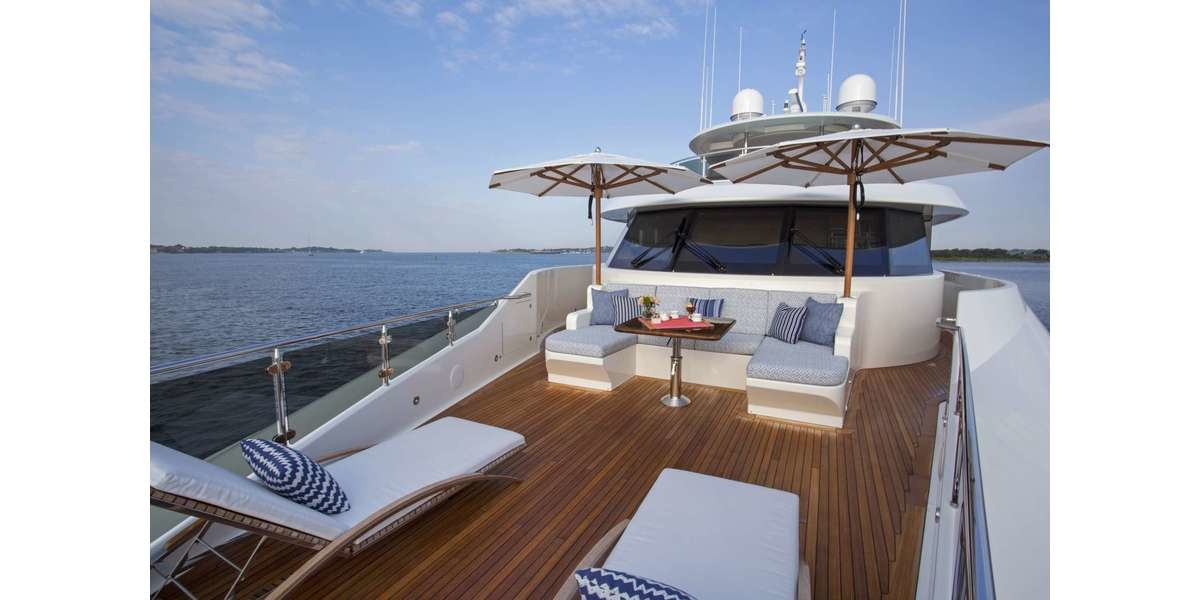 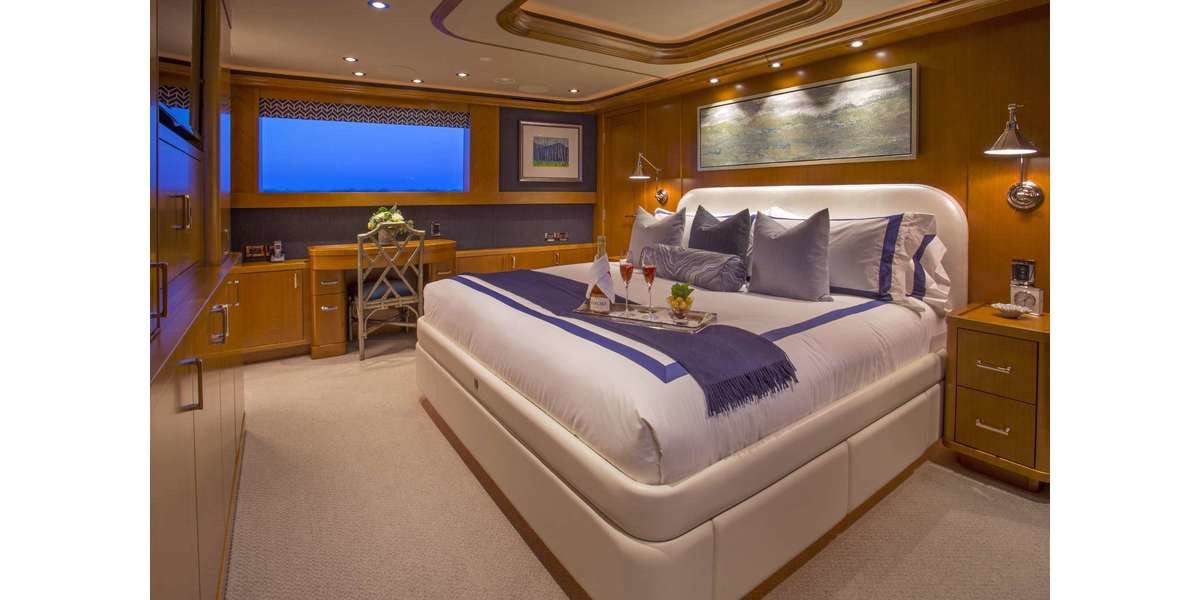 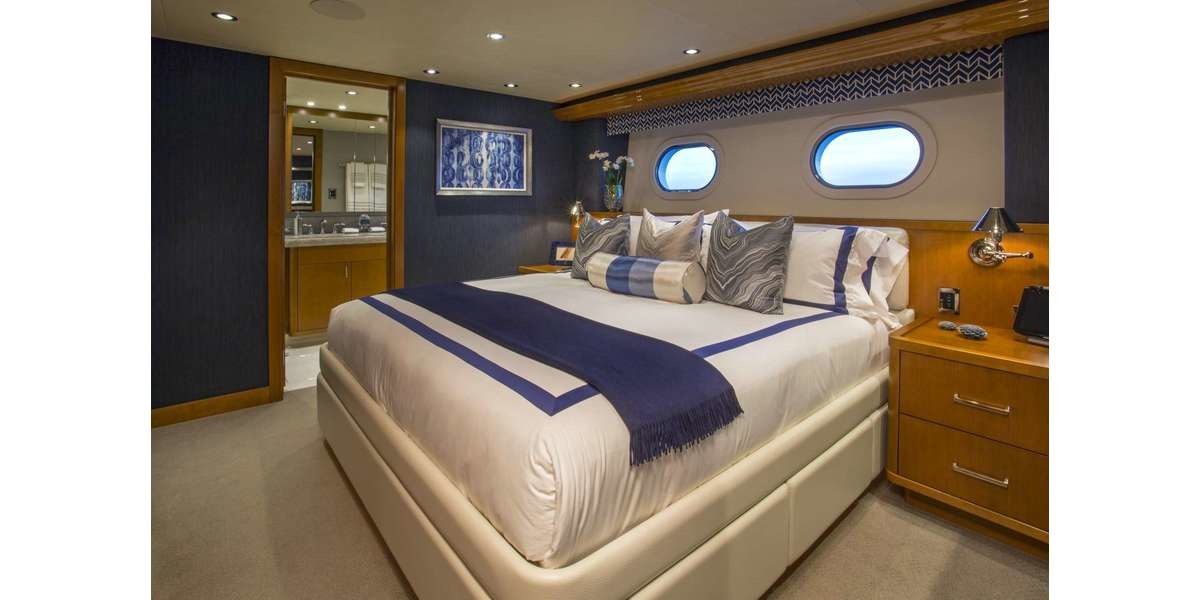 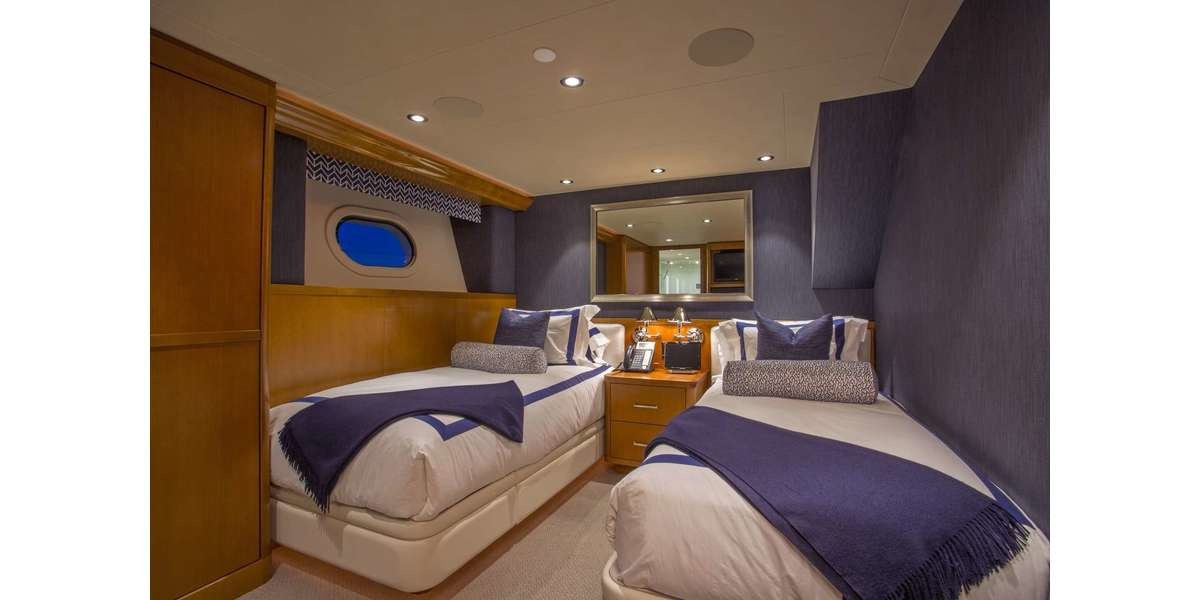 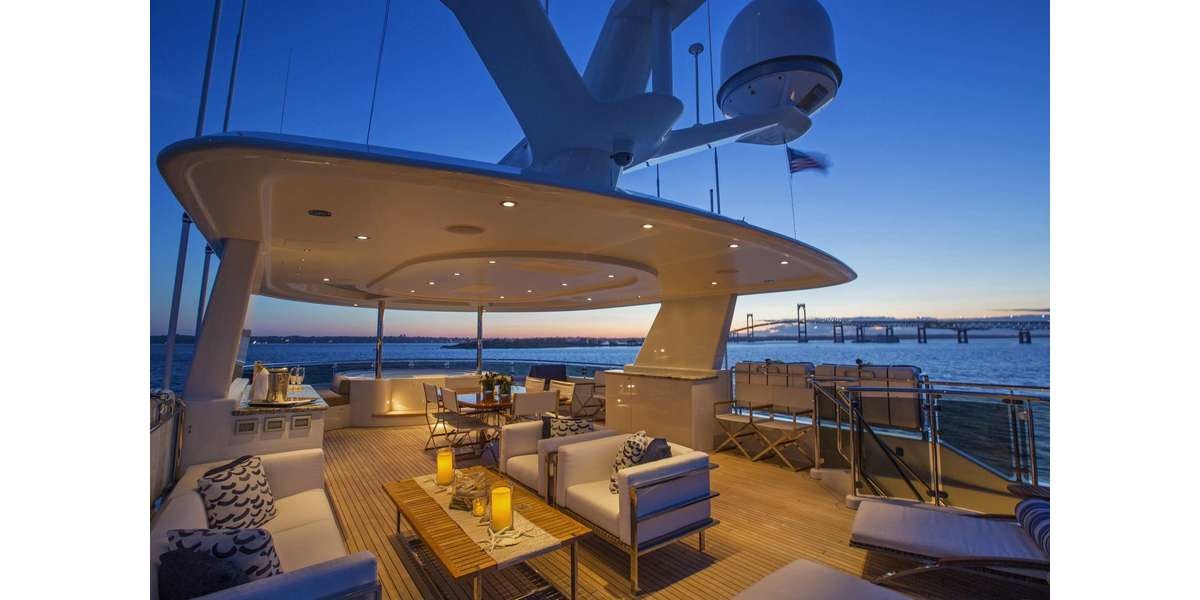 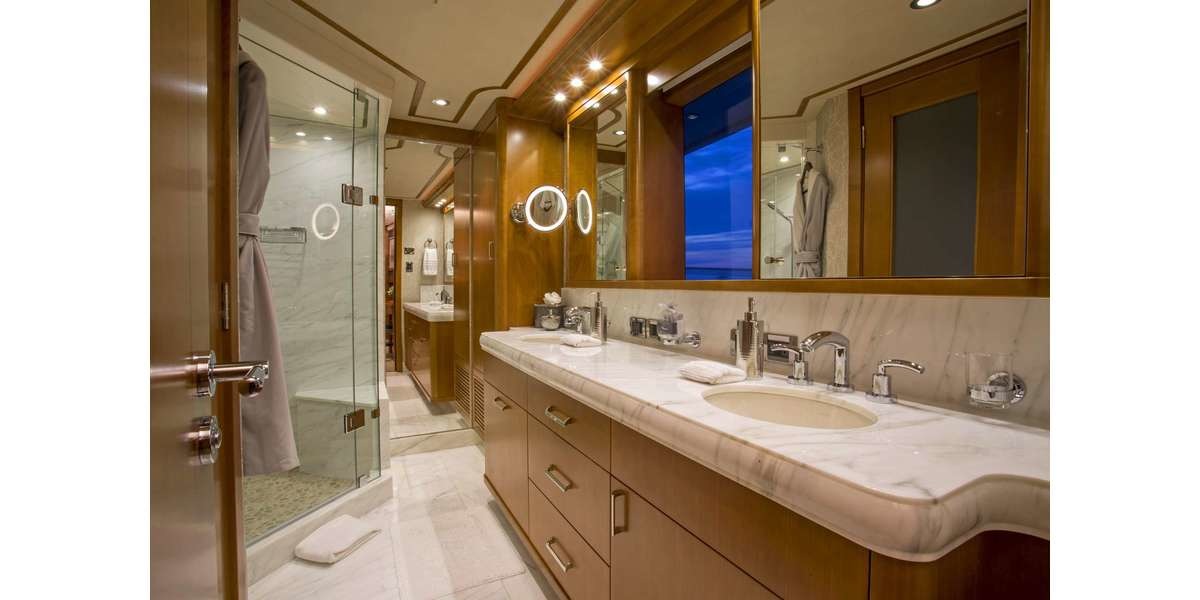 Built in 2014 and refitted in 2017, this superyacht is a 130' Westport yacht and available for Caribbean charter. This stunning superyacht features five well-appointed staterooms with a full entertainment system, en-suite facilities and the ability to convert one of the twin staterooms to a king. The yacht offers modern and generous living areas and well-designed exterior with an enormous sundeck and Jacuzzi. A large selection of water toys guarantees fun and adventures for all water sport enthusiasts. Her dedicated crew of 7 will be sure to satisfy all of your needs and make sure you enjoy your luxury yachting experience with friends and family.

No portion of the charter fee paid herein is refundable unless the Charterer provides the Company at least ninety (90) days written notice, prior to the start date of the charter of their intention to cancel and further provided that during such ninety days period the company is able to rebook the Yacht for the same charter dates under such terms and conditions at least as favorable to the Company as those set forth herein. There will be a $300.00 cancellation fee in the event of a refund. In the event that the Company has to cancel any portion of the charter due to severe weather or warnings of severe weather, a credit for the unused portion of the total charter fee will be issued. This credit can be used against any future charter with the Company depending on Yacht availability. We strongly recommend our clients to take out their own trip cancellation, medical and personal effects coverage. If you have any concerns at all about any part of this subject, give us a call, we are here to assist.

After 90 days prior, deposits are non-refundable unless trip insurance is purchased. We recommend that all charters booking in low/off season purchase trip insurance in the instance a storm cancels your charter. Trip insurance is also advised if there is a chance your dates will change. Without insurance, the deposit will be lost.

Jason started his life on the water at the age of 5 racing small sailing dinghies. After racing for a number of years he taught these skills at the Olympic sailing school in Wales. At the school, he passed his Master of Yachts unlimited and with such credentials was able to join the Americas Cup Yacht, Stars & Stripes. With a passion for travel working on super yachts seemed a natural progression. Since then he has worked on multiple yachts and has 17 years of experience in the industry.
As a captain, he oversees every aspect of the yacht’s operations ensuring safety at all times and a comfortable cruising experience. He is adept at crew relations, continually maintaining a strong team environment to create the most memorable and service-oriented experience for the guests.
Hobbies include: Free diving, wake boarding, sailing and kayaking

Brad grew up on the East coast of South Africa in Durban where at the age of 11 he discovered his passion for water sports and fishing. He went onto owning his own boats and jet skis by the time he finished school. He spent many weekends taking his friends and family out on the water, whether it was bass fishing, wakeboarding, jet skiing or even deepsea fishing. With his experiences as a skipper for his friends he realized his passion for guest satisfaction and hospitality. After 6 years of being a foreman for a manufacturing company he decided that two days a week was not enough time spent on the water. He was on the verge of starting his own fishing charter company before deciding to redirect his aim towards the yachting industry. In 2016 Brad started his maritime journey with captaincy on the horizon.

Born in Florence, Italy Chef Massimo grew up around traditional Italian cuisine, this allowed him to learn baking and pastry skills at a very young age. In 1989 at the age of 15 he began his career in the restaurant industry. Since then he has held positions in several of the world’s top restaurants, working most recently for Sheikh Mohammad bin Salman at the Royal Palace of Saudi Arabia.
Massimo is no stranger to working on yachts, he has held the position of Head Chef on the 295ft Super Yacht Lauren L, the 247ft Boadicea and the 237ft Legend, catering to past Presidents, Royal family and several of the most prominent names in Hollywood & Corporate America. As a culinary trained Chef with over 29 years of experience Chef Massimo is able to custom design menus taking into consideration the dietary requirements and specific tastes and needs of his guests. Everything in his galley is carefully made from the most basic of ingredients making all pastry and bakery, ice-creams and fresh pasta in house. Even the nightly turn down Chocolates don’t escape his artisan hand with newly invented fillings formulated for each and every charter.

Simon is from Melbourne, Australia. He has been working as a chef for over 20 years in some of Australia’s premiere restaurants and his cooking covers a broad range of cuisines, with a strong focus on client satisfaction. While not from a yachting background he has worked in the industry for a number of years on both sail and motor yachts and has developed a real passion for the sea.
Hobbies: Diving, mountain biking, and reading

Originally from Durban, South Africa, Chantal started her life in the corporate industry straight out of school. With extensive admin experience and a drive for success she eventually started working as a sales executive for Jaguar Land Rover, before finally succumbing to her love of the sea. Having been raised on the coast she has a natural wanderlust and after travelling all over the world for pleasure she finally settled into the yachting industry. Her journey began in December 2016 as a junior stewardess and she has since continued to grow and flourish into her Chief stewardess position. When she is not giving the best service possible, Chantal loves to be adventurous, explore new places and enjoy her time outdoors.
Hobbies: Traveling & exploring hidden gems, Fitness, fishing & being outdoors

Danielle grew up on the south shore of Long Island, NY where she spent summers boating, crabbing and clamming on the Great South Bay. While attending Stony Brook University pursuing her degree in English, she began working at Sailors Haven Marina on Fire Island. It is there that she fell in love with the boating industry and knew that working in and around boats is where she belonged. She spent the next six years working at different marinas from Fire Island to Montauk. Upon graduating college Danielle spent a year traveling through Latin and South America. She spent six months teaching English as a Second Language in Costa Rica and had the privilege of traveling to Nicaragua, Panama, Peru and Bolivia. Her zest for travel and her prior boating experience made joining the yachting industry a perfect fit. Danielle joined the yachting industry in 2018 and has gained experience on both motor and sailing yachts. Her easy-going attitude combined with her passion for service will put you at ease and ensure you have a wonderful experience!
Hobbies: Reading, water-sports, Yoga, running & traveling.

Lindsey was born and raised in Arizona. She previously worked as a trainer Jockey for a horse track but her love for the water convinced her to make a change into the maritime industry. She has been in the maritime industry ever since, 13 years now and counting. She gained much experience as a dockhand at a marina and from working at a boat & jet ski rental company. From there she decided to take her career further and worked onboard a dive boat while obtaining her captains license.
Hobbies: Diving, kite surfing, wakeboarding, horseback riding, and traveling

Josh grew up in Sarasota, Florida where he developed a passion for boating at an early age. He began sailing dinghies as soon as he could, joining the Opti national team at eleven and continuing to race and coach before his beginning his yachting career. Josh is an avid fisherman and also enjoys traveling, diving, spearfishing, and other watersports. From repairing and maintaining his own boats and a fleet of coach boats, he developed an interest in all things mechanical which led him to pursue engineering. He has been in the yachting industry for 8 years in a variety of engineering roles earning his Y4 license with the MCA in 2019.
Hobbies: Sailing, Fishing, Diving