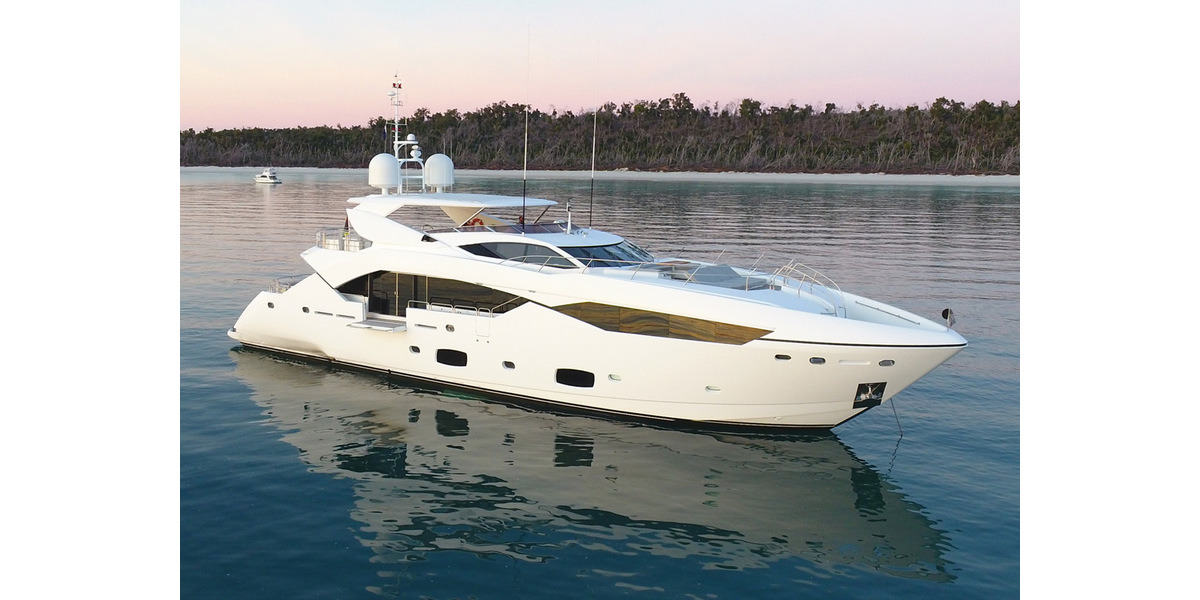 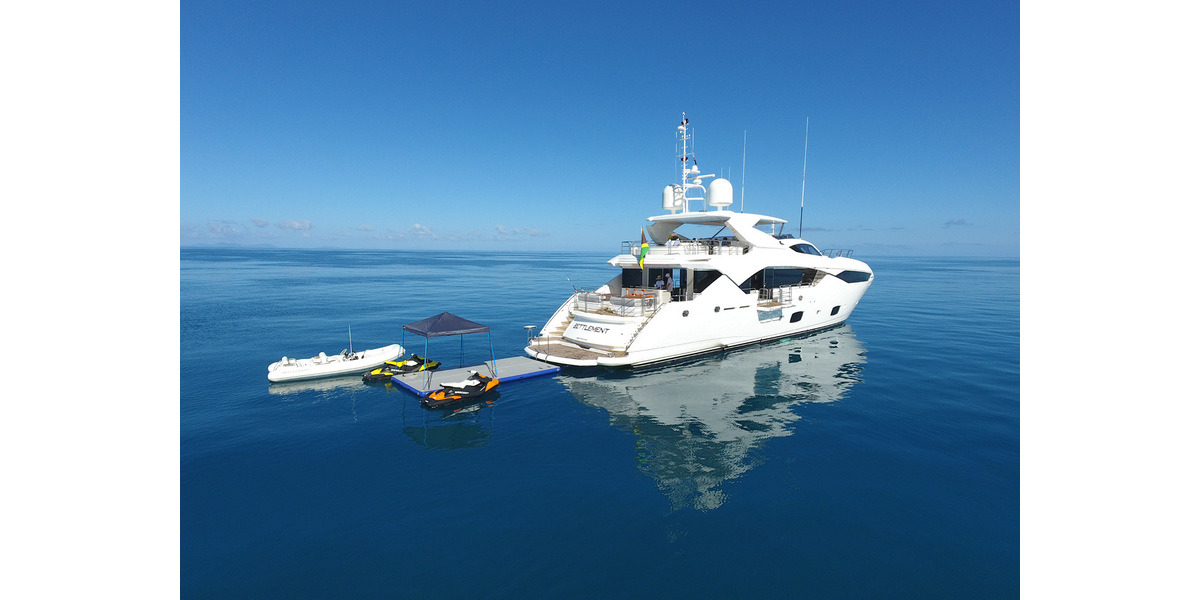 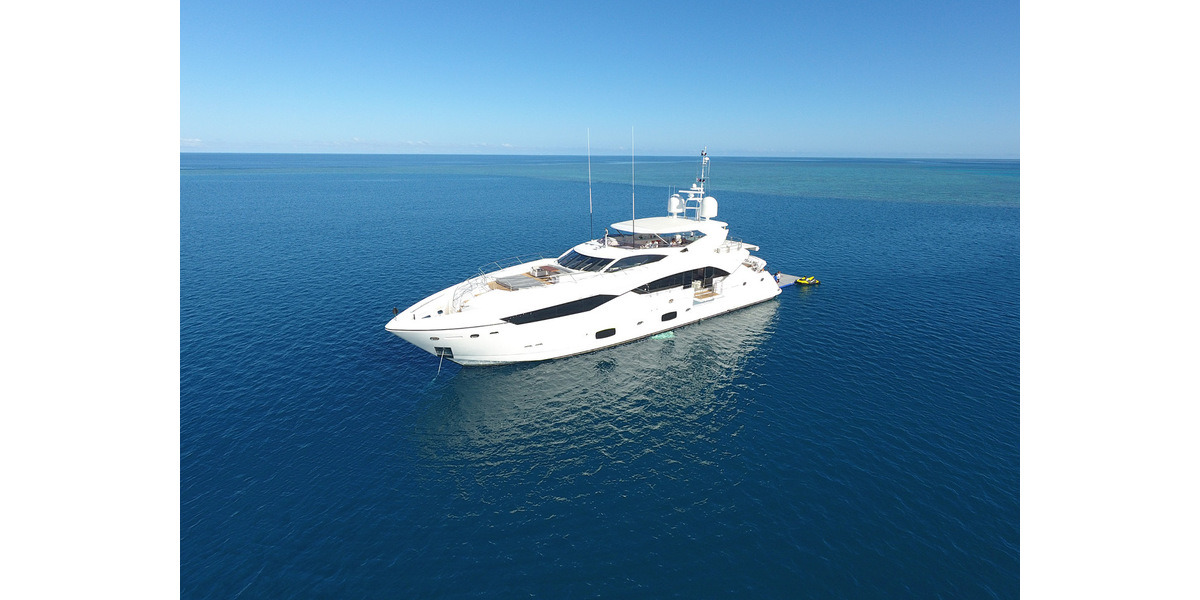 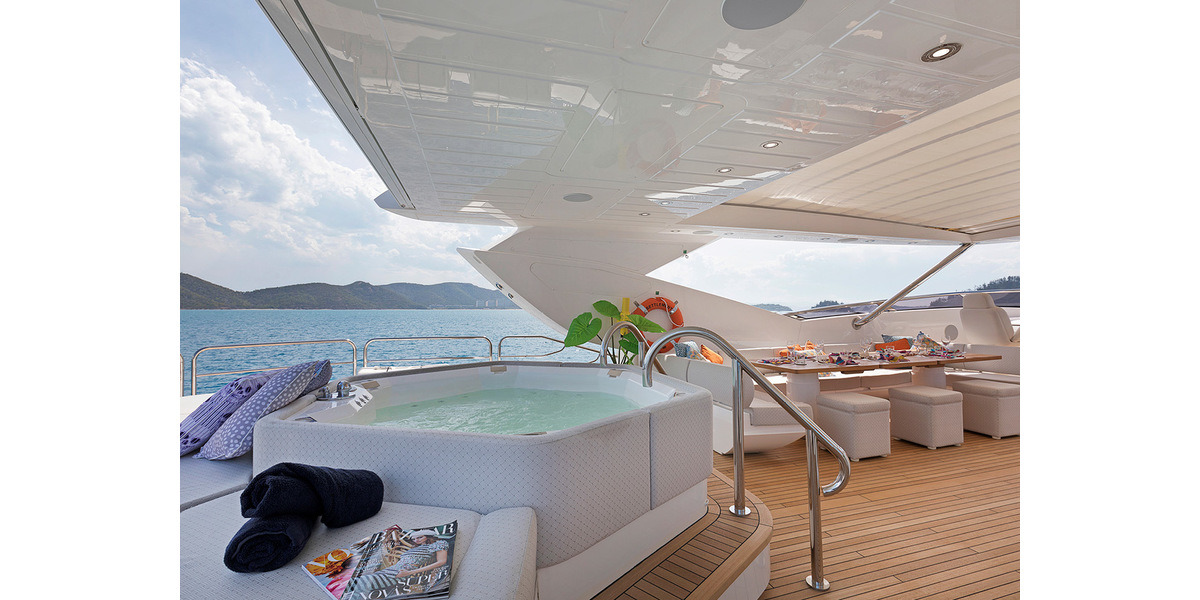 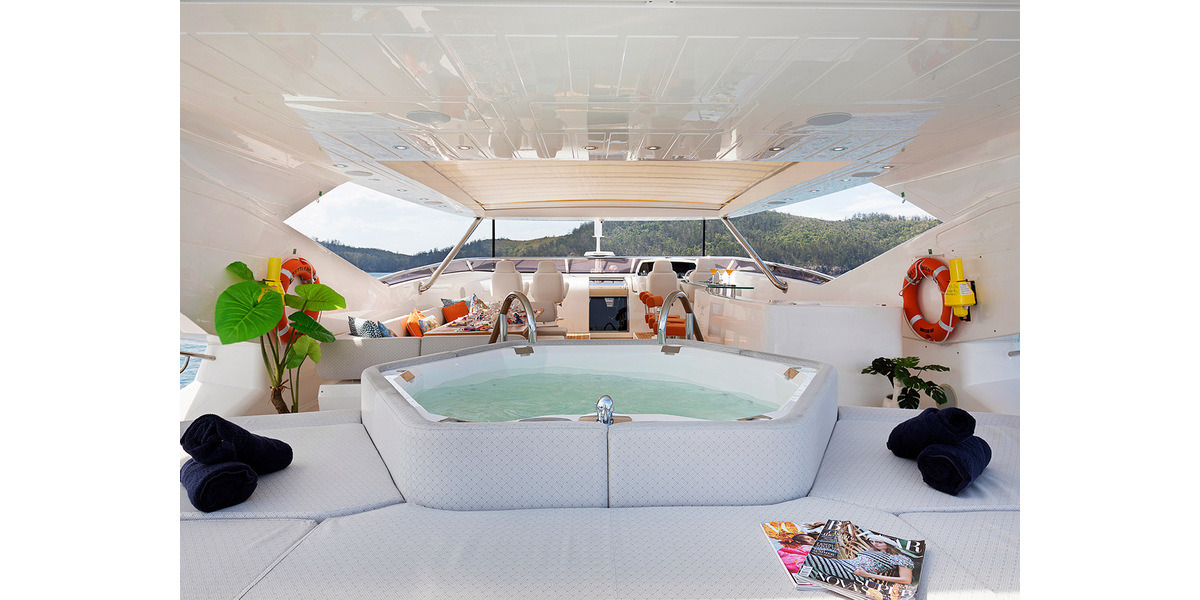 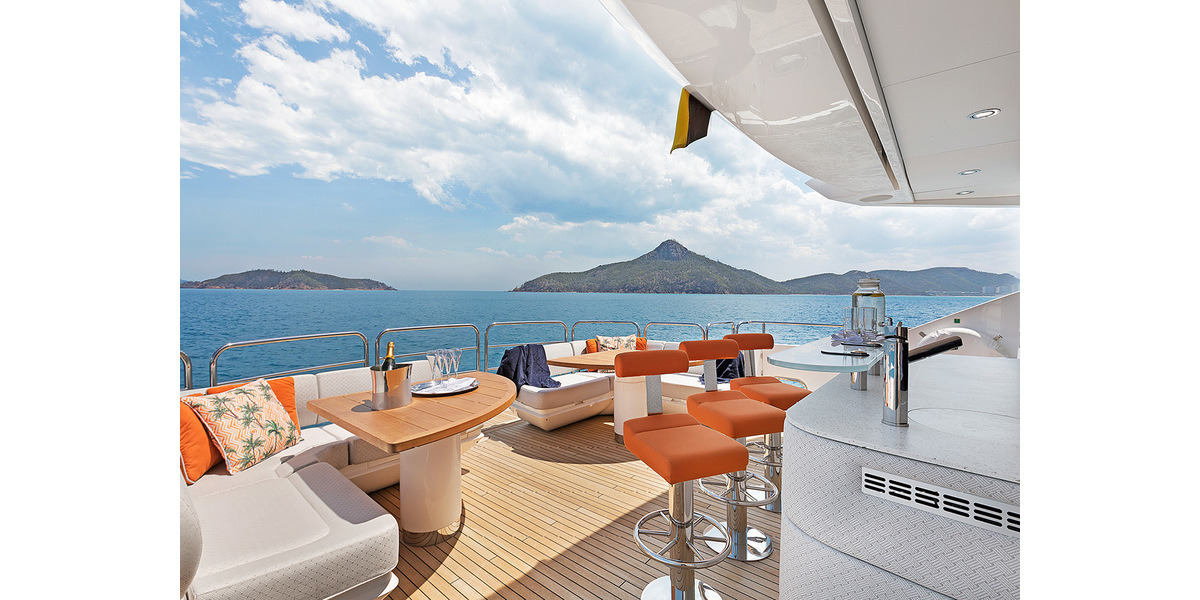 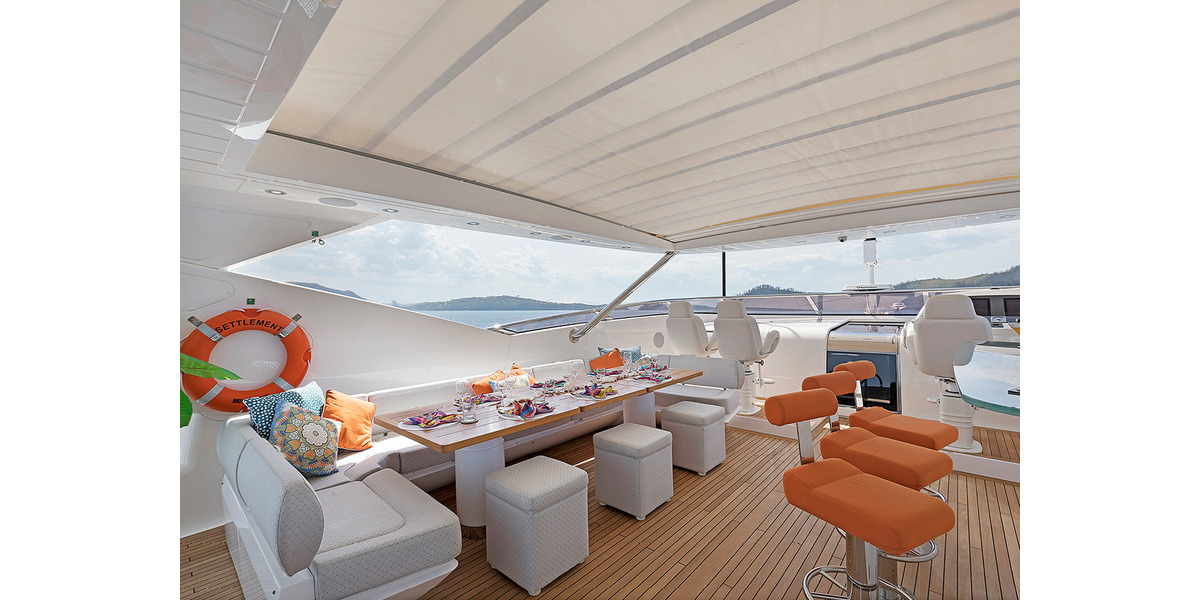 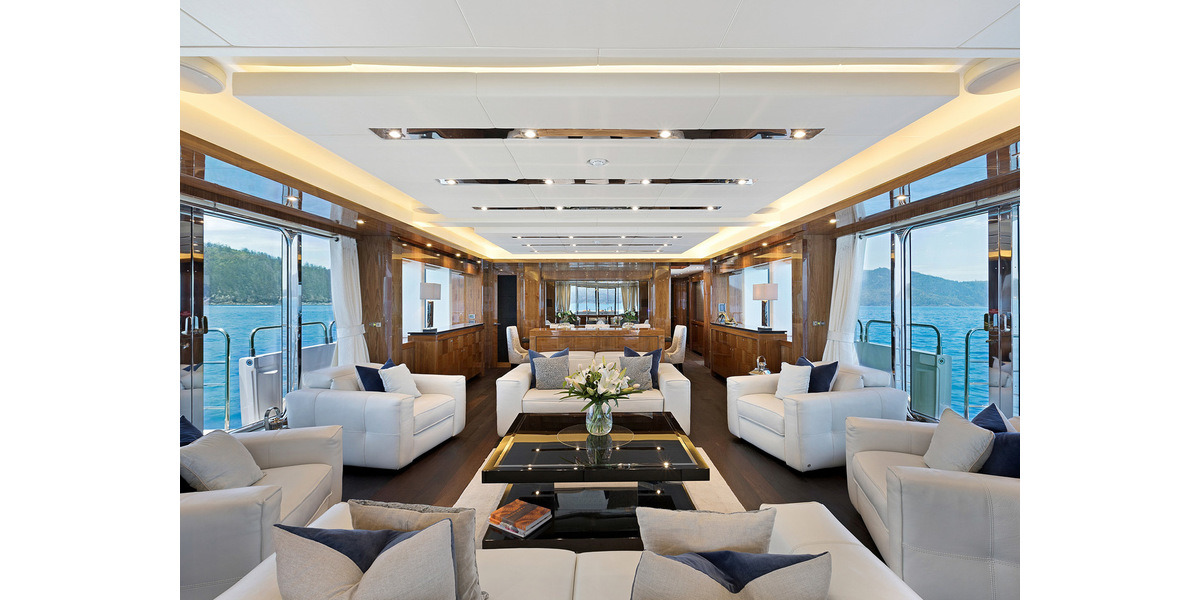 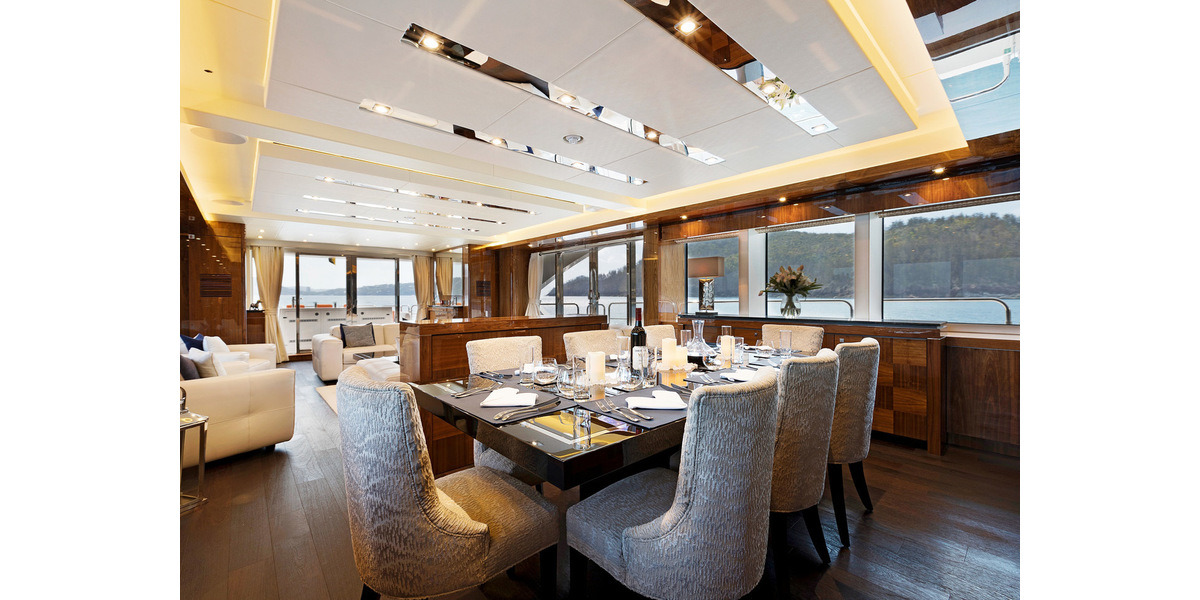 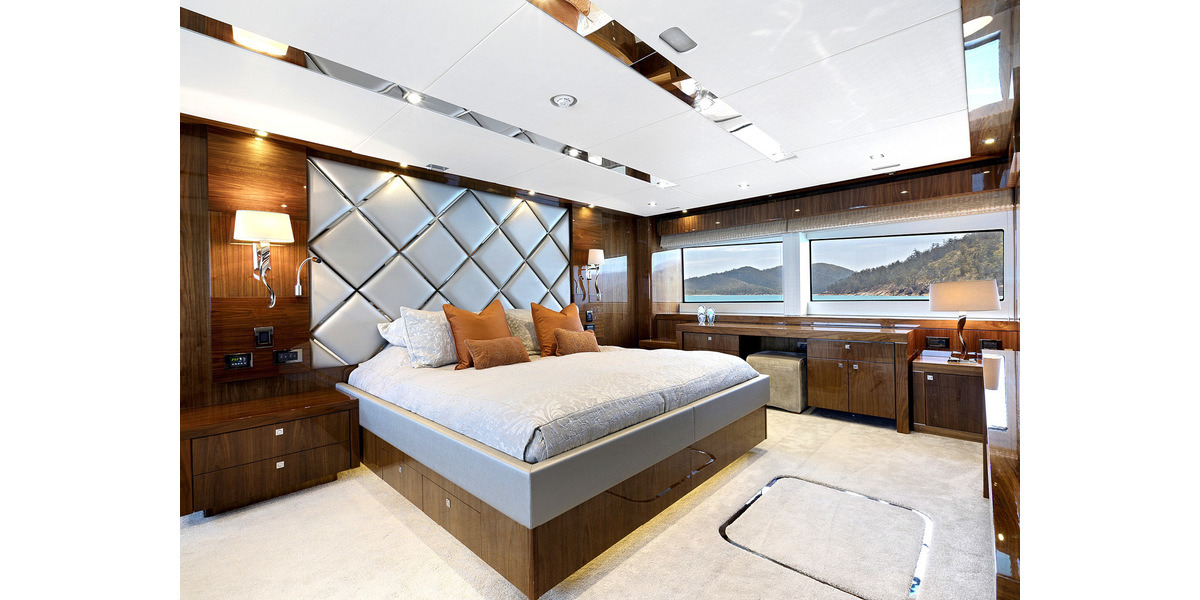 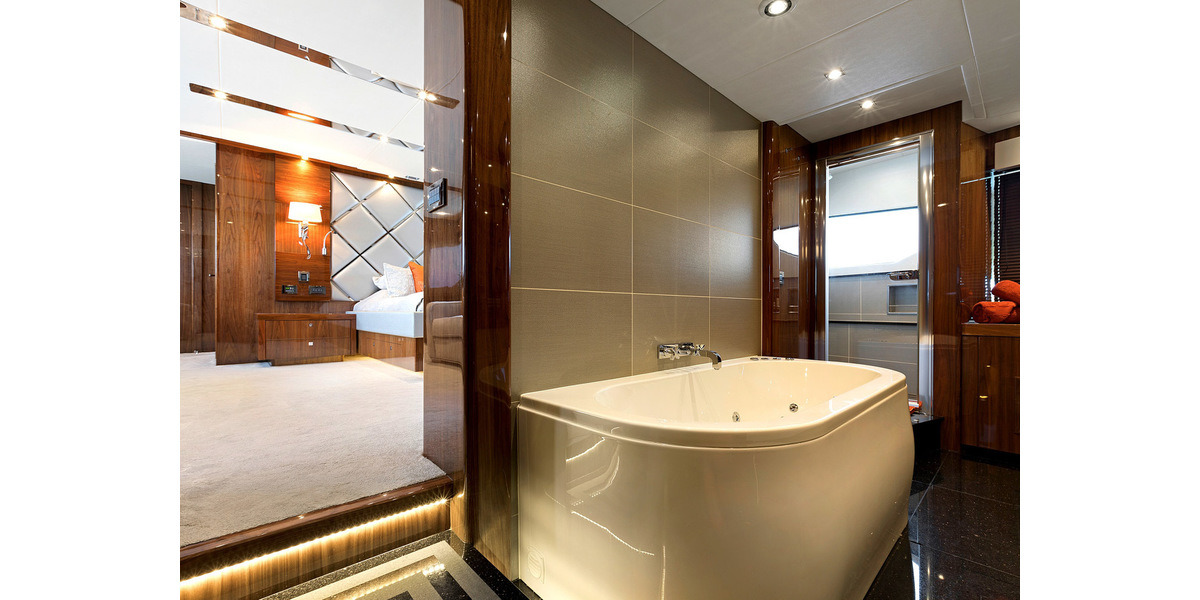 Ths stunning Sunseeker 113 was built in 2015 by the famous British yard Sunseeker International. Her interiors are fitted with signature black American walnut panelling, accommodating 10 guests in 5 cabins: a Master cabin on the Main Deck, full-width with a private ensuite and jacuzzi bathtub, two large doubles and two twins (both which can be joined up to form double beds), all with modern entertainment centres and ensuite bathroom facilities.

The open-plan saloon has extensive seating on cream coloured settees with black lacquered coffee tables, a full wet bar and an entertainment centre including a 55-inch television screen and a System Orca sound system. A special feature is her port and starboards sea balconies, opening up to each side of the Main Salon an accessed via sliding patio doors. Forward is a formal dining area with seating for up to 10 guests. The aft cockpit is fitted with everything needed for al fresco entertaining and dining, leading down to the garage and swim platform, where all the water-fun resides!

Captain Glenn joins SETTLEMENT in October 2019, bringing with him an array of experience and extensive knowledge.

He has commanded a multitude of different vessels within both the private and commercial maritime sectors. During his career, launched in 1997 on board the 185ft Amels TIGRE D’OR, he has developed and executed international and domestic cruising itineraries, and been involved in new build / refit projects in Europe and the UK.

Travelling to the USA, he joined the 195ft M/Y ULYSSES as First Mate in the USA, co-managing her build at Trinity in New Orleans. Prior to that, he was lucky to experience his first round-the-world navigation on board the 165ft Feadship of the same name, cruising from France to New Zealand. Glenn held a long-term relationship with one of his Owners, and obtained his first role as Captain in 2003 in Sydney on board the 70ft Oceana. The 3 different vessels took him to Europe and the East Coast of Australia until 2009. Taking a break from superyachting, he was involved in the Rio Tinto Expansion Project in Western Australia from 2010 to 2012 managing commercial barges, tug operations and heavy cargo. He was back on superyachts in 2014 with increased skills and expanded horizons. Glenn calls Australia home, and cannot wait to create incredible experiences for guests on board SETTLEMENT.

Design combined with Food Creation. Paul combines unique skills in his art, and comes highly recommended.
Growing up in New Zealand, Paul was always inspired by pure surroundings in nature and the elegant alchemy found in landscapes.
He trained to become a Graphic Designer and assuming different roles until 2016, when the textures and colours of ingredients attracted his attention. Paul therefore decided to change careers and enter the world of kitchens, which led him to move to Melbourne, Australia in 2003.
Paul developed his skills through infusing his days with passion for cooking: attracted by the food&wine pairing. he joined the well-known Pelican in Melbourne for 2 years, prior to growing his experience at the 2-hat Melbourne Wine Room, Becco among a few others from 2003 to 2007. He then joined the modern Australian Restaurant 312, went on to create fine dining Italian and French dishes until 2013.
In 2014, Paul’s obsession with Mexican flavours stroke through: he set up to launch Mesa Verde with great success and hard work, as the Head Chef from 2014 to 2017. He paired the beauty of long established Mexican flavours and techniques with Australian innovation and creativity, whilst utilising seasonal and local produce (agave being one of his personal favourites to work with!). Paul then experienced with a pop-up brew house concept, before joining his first superyacht in 2017.
He has been cruising ever since, and delighted to be joining SETTLEMENT for further adventures.

Growing up on the North Queensland Coast of Australia, in Cairns, it was a childhood surrounded by water dreams for Amanda. Firstly developing her hospitality skills at renowned venues in Cairns, she then acquired further experience in unique settings: private guest attendant at the beautiful Hayman Island in the Whitsundays, and Green Island Resort – the only coral cay with a rainforest in the Great Barrier Reef.

Naturally, her attraction for the ocean led her to her first role in 2006 and she has not looked back since. In 2008, she completed a British Butler Institute course in Fort Lauderdale, and among all her yachting certificates Amanda also holds a Proficiency in Crisis Management – developing her valuable human connection abilities always with a smile.

Amanda has cruised some incredible locations and been involved in fascinating itineraries, creating superyacht experiences for guests around the world. She first headed out to Antibes in 2011 on board ECLIPSE (43m Feadship) and also travelled to Israel within that program. She has assumed the role of Chief Stewardess with pride since 2013 on board HURRICANE RUN (53m Feadship). Amanda’s hobbies include yoga, swimming and snorkelling, kickboxing, and drawing.

Hanna’s young soul reflects great energy and passion for the industry, she entered in 2016 on board a 45m sailing yacht around New Zealand’s North Island and Fiji. Combining her passion for travel and curiosity, she travelled to Antibes and was immediately hired on board a private 35m cruising around the South of France.
Hanna has combined experience on private and charter yachts around Australia and New Zealand, occasionally travelling to Europe to join motor yachts and develop her skills.
She is a PADI Open Water diver, and is an active team sports player. Unique Fact: Hannah achieved her Tae Kwon Do Black Belt, and is passionate about martial arts!

Fletcher has an extensive experience as an engineer in different sizes of sailing- and motoryachts. He has cruised in the most of the world's coeans and seas, including Australia and New Zealand, French Polynesia, Fiji, the Cooks Islands, Papua New Guinea and more...