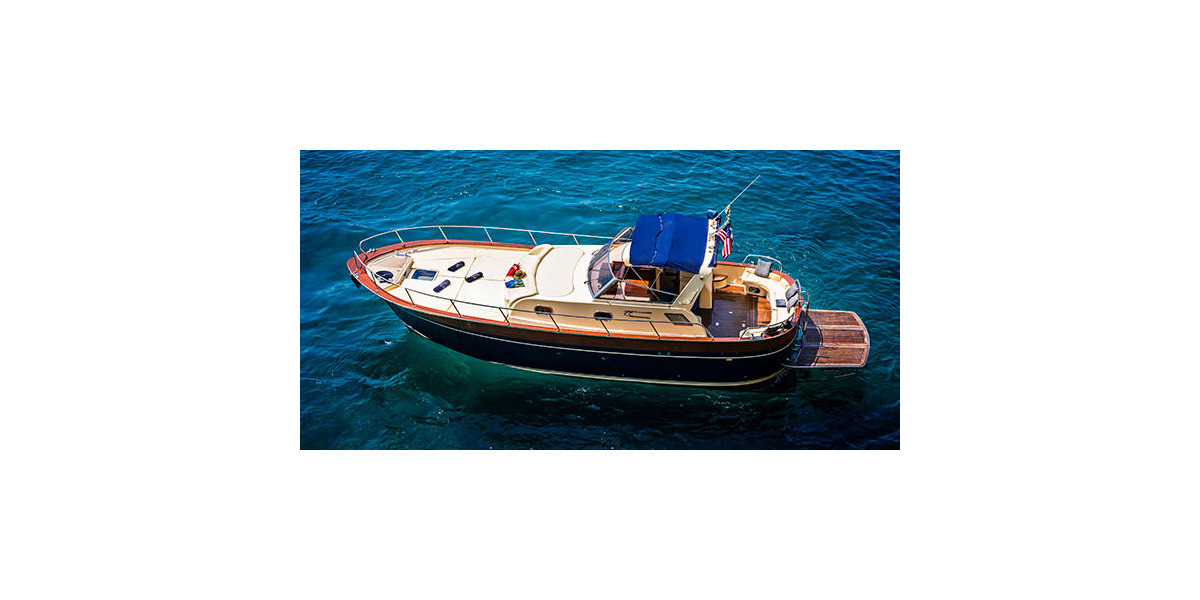 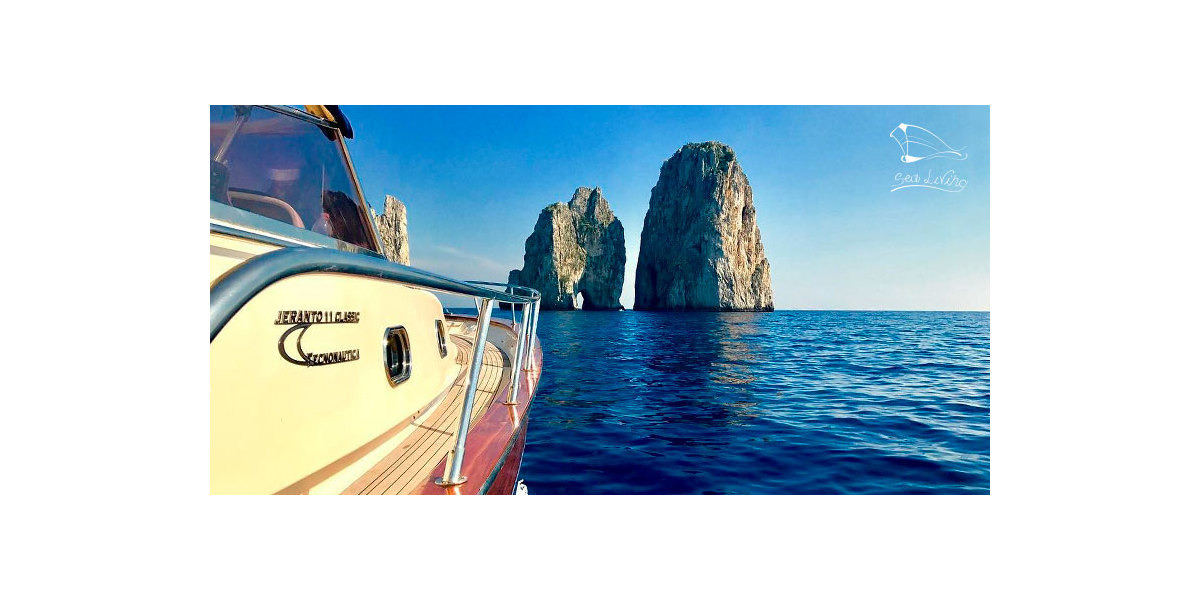 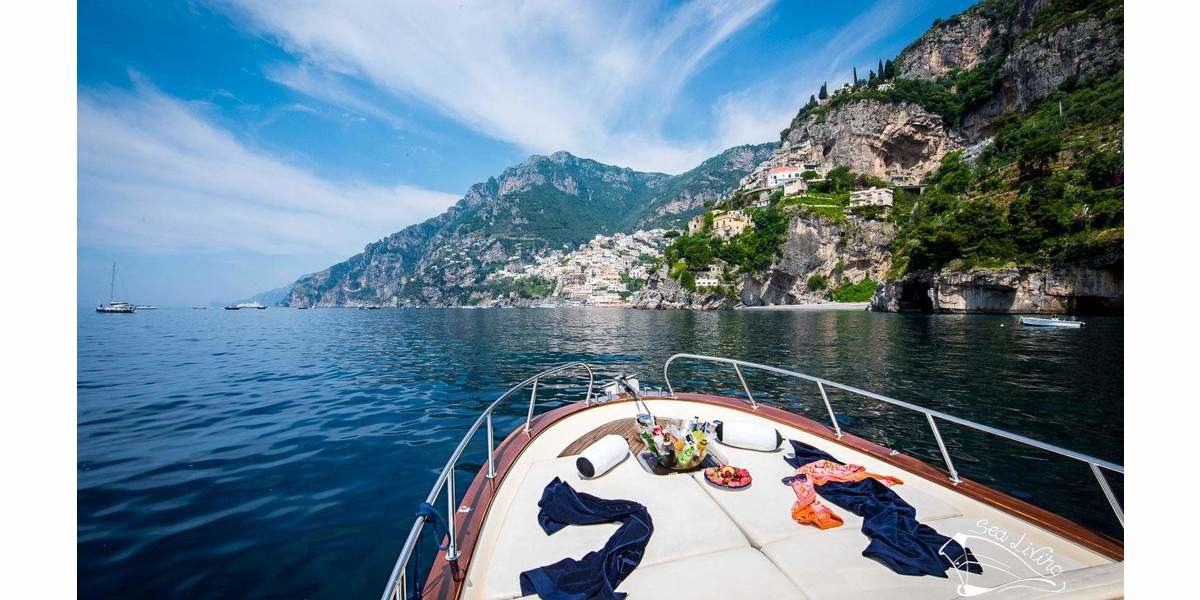 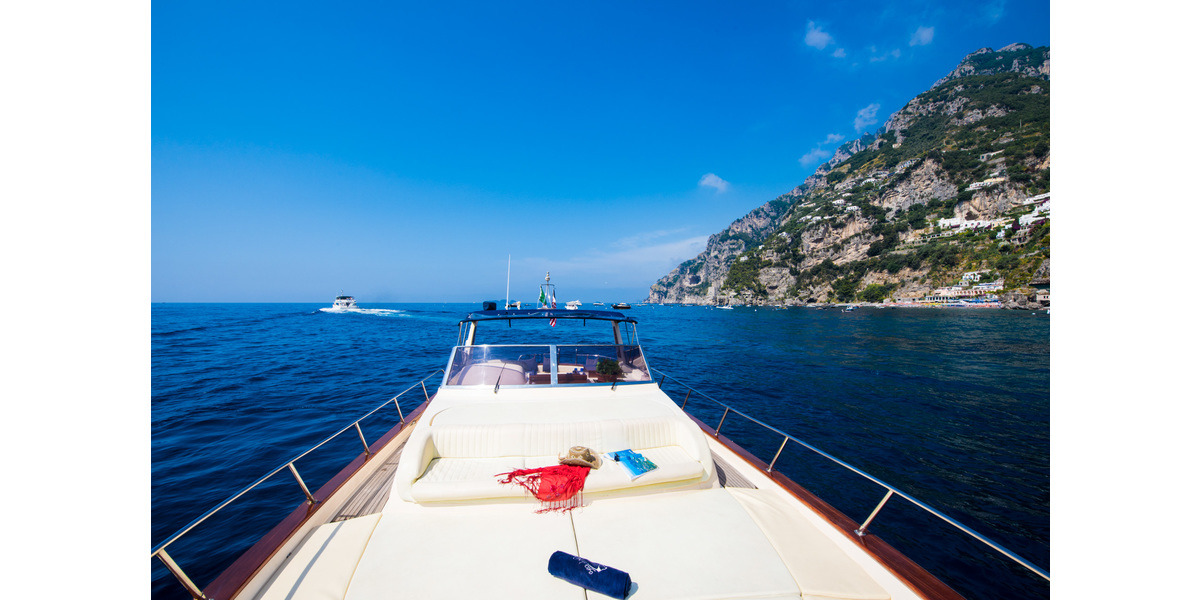 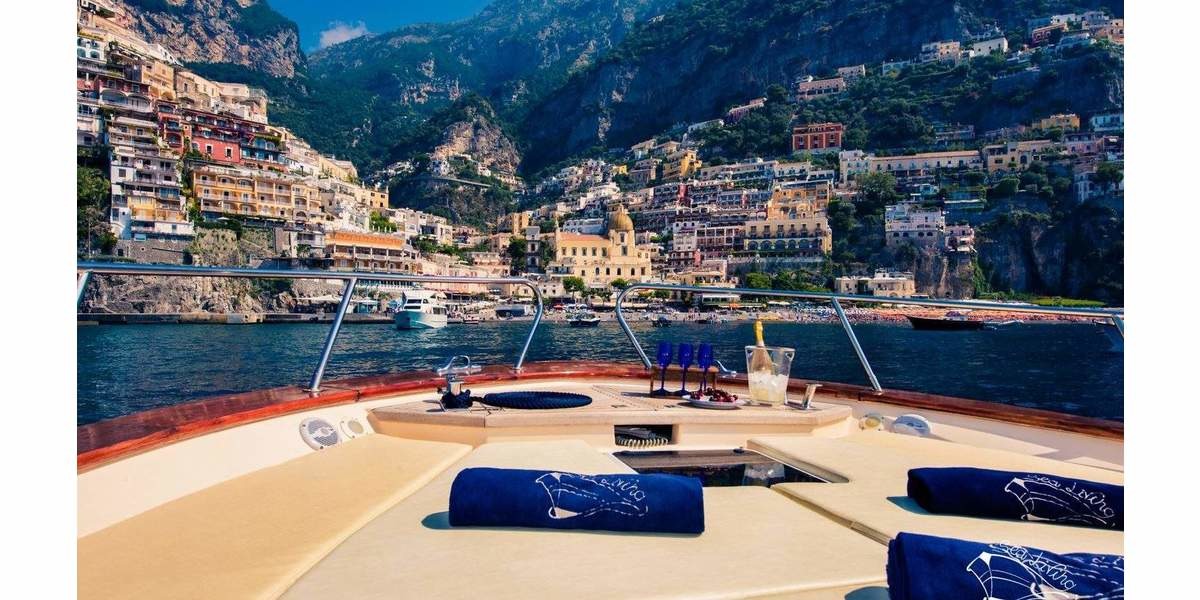 A sample OF what you WILL LIVE!

The best way to admire the beauty of the town is certainly looking at it from the sea: a tangle of tiny and colorful houses, clinging firmly on the sloping rock... dominated by the imposing and colorful dome majolica of the Church of Santa Maria Assunta. Along the coast one can still admire the ancient Saracen watch towers and not far away, the bewitching archipelago of "Li Galli", a group of three islands considered former residence of sirens. But beyond the magical landscape, Positano has always had great traditions: the famous "Moda Positano", the precious "jewel sandals" so beloved by First Lady Jacqueline Kennedy; the artistic works in hand-painted ceramics, the production of limoncello and the local cuisine obviously inspired to the sea.

Less famous and therefore more suitable for those who want a peaceful holiday, Praiano is actually an established tourist destination. An old fisherman village, it was chosen by the Doges of Amalfi as a summer residence during the period of the Maritime Republics. Just like all the other villages of the coast, the sea is the best way to appreciate its beauties, including the two main beaches of Marina di Praia and Gavitella; the Africana Grotto and Suppraiano Cave. To night life lovers we recommend a dancing night at the Africana, the first night club of Amalfi coast and now famous disco with international performances.

Continuing our exciting journey along these coasts, our next stop is Furore, where you will be catapulted into a typical northern landscape with the most incredible fjord. Highly recommended is a trip to the small town where every year many artists enjoy painting the homes of the "furoresi", "drawing" the sweet melodies of the sirens and the scents of golden lemons.

Tucked away in a corner of the coast of Conca dei Marini, the Emerald Cave is a natural grotto which will literally take your breath away. In addition to the main entrance (also accessible the light penetrates into the cave by a second opening located less than 12 meters deep, creating emerald shades and coloring the entire grotto.

Amalfi is the oldest town of the coast, and not coincidentally gives it its name. The town reached its peak fame in the period of the Maritime Republics and of the Tables of Amalfi, were edited and stored here. This was the first real maritime code protecting businesses and trades along the coasts , but also describing the various behaviors crew members had to follow. Looking at the town from the sea the first thing you can admire is the impressive and rich bell of St. Andrew's Cathedral, better known as the Cathedral of Amalfi. The Cathedral contains a lot of treasures, and it is "guardian" of a strange mixture of distant and contrasting artistic movements finding here the perfect harmony. A visit to the ancient paper mill, now a museum is also a must. Here one can still see the process by which it was once produced the famous paper of Amalfi.

Atrani is the second smallest village in Italy, a real crib starting from the little beach and extending vertically up to the state road, all within a few square kilometers. Small colorful houses, narrow streets and steep stairways give the village its medieval appearance, and all converge to the main square full of bars and small restaurants.

Off to the GROUND!

The beauty of the coast is also in the highest areas, which certainly deserve to be reached and visited. Starting from Amalfi, you have the possibility to visit the other villages of the Amalfi Coast, including the particularly famous "City of Music", Ravello. The beauty of the place is given above all by the natural landscapes, heavenly views to the sea and the charming villas with sumptuous gardens and marble statues.

Completely change route and head towards the Sorrentine peninsula. Just in front of it, Capri, the island of the Gulf of Naples, whose beauty has been well known since ancient Roman times. Taking a tour of the island means to be literally enchanted by the beauty of the coast, the colours of its caves, and the characteristic buildings only a few meters from the precipices. Certainly worth a visit the inland of Capri with the remains of the twelve patrician villas built by Emperor Tiberius, all facing the sea towards the impressive Faraglioni.

Speaking of the peninsula, we move to the town which gives name to the whole coast. Sorrento is perhaps the only town in the region that can be considered a real miniature city, rich in services, shops and restaurants, which make it a perfect location for young people and for night life lovers. The true wealth of this town is its historical center which preserves one of the oldest the traditions in the area: the art of inlaid woodwork.

Wedding day on our boat 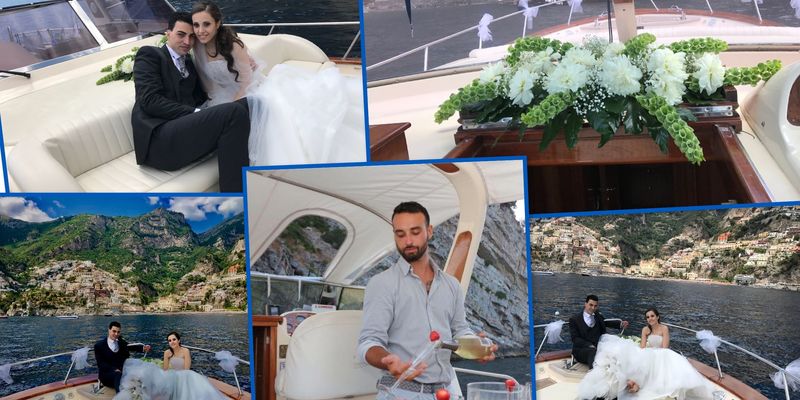 YOUR SPECIAL DAY, YOUR PRECIOUS MOMENT ON THE BOAT 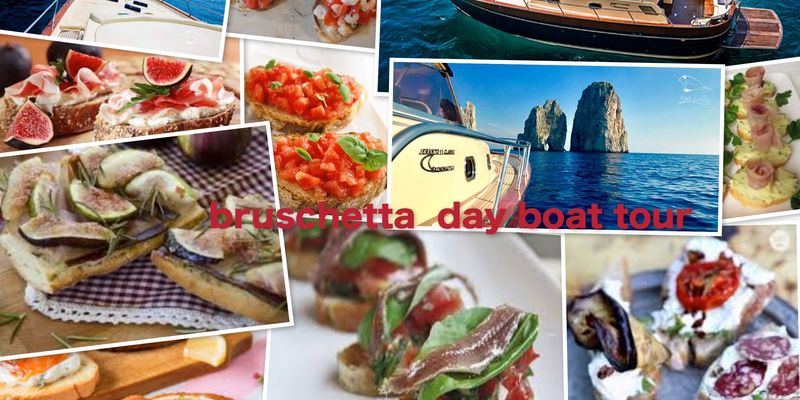 Our "Gourmet Tour" will give the opportunity to try the most popular specialties of the coast and best dishes of this magical sea. You can choose to taste the delicacies from Amalfi, Nerano, Capri or Cetara. The... 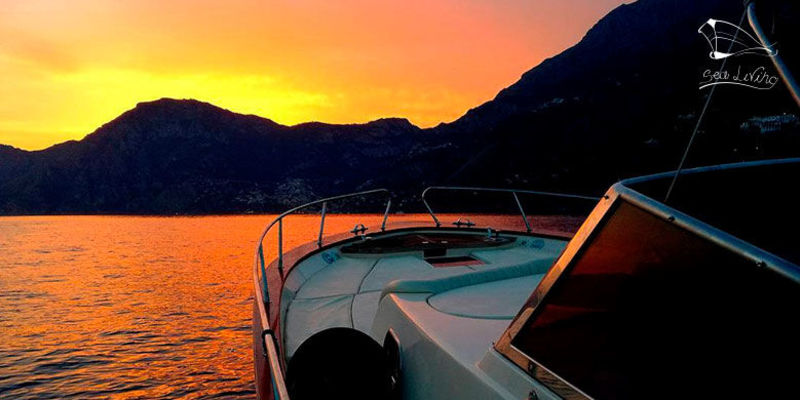 You will have the opportunity to experience the most magical moment of the day in the company... of the sirens! We will leave Positano in the afternoon to reach the archipelago of Li Galli in the exact moment the sun decides to hide... 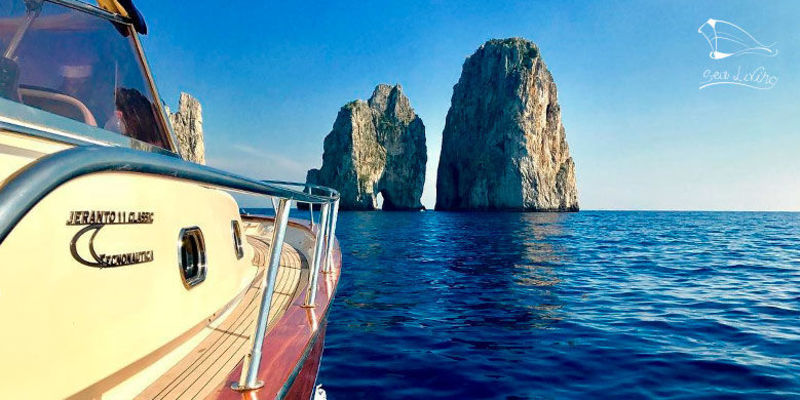 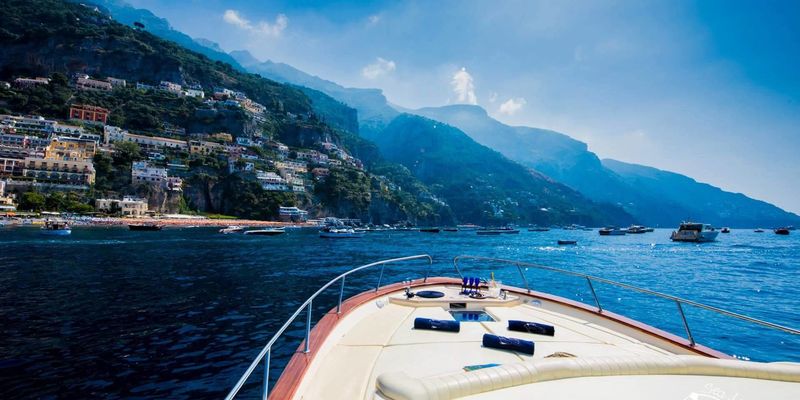 After deciding on the departure time together, we will sail along the Amalfi coast, admiring all of its "gems": a succession of small beaches only reachable by sea, alternating with coastal villages and bare cliffs of rock.

Strict (50% refund up until 1 week prior to arrival, except Boataffair’s Service Fee)