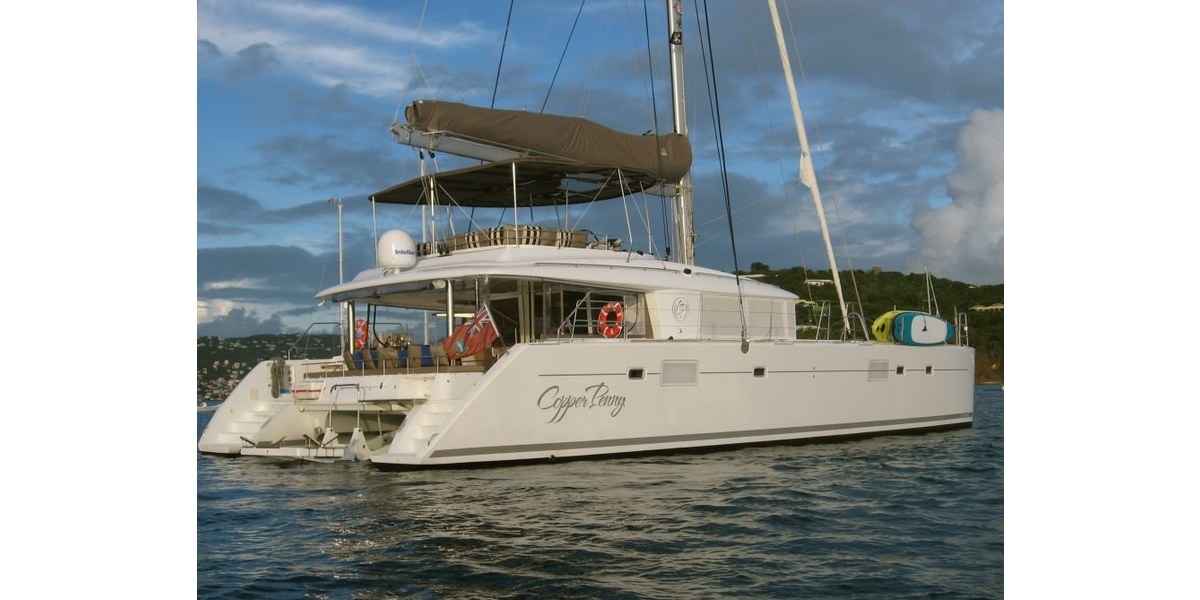 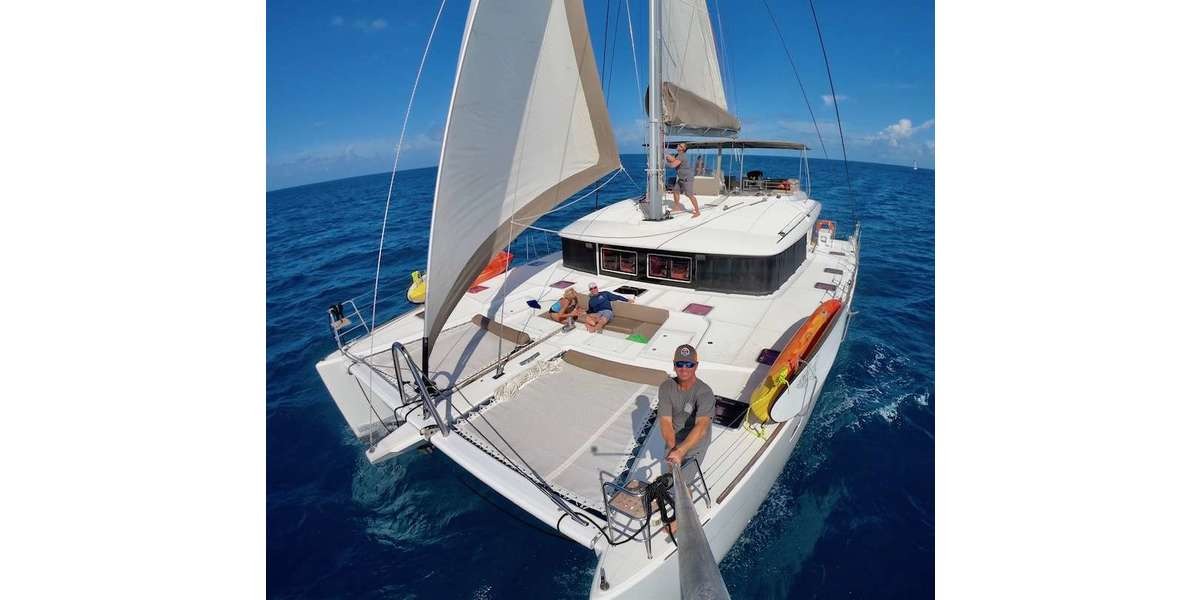 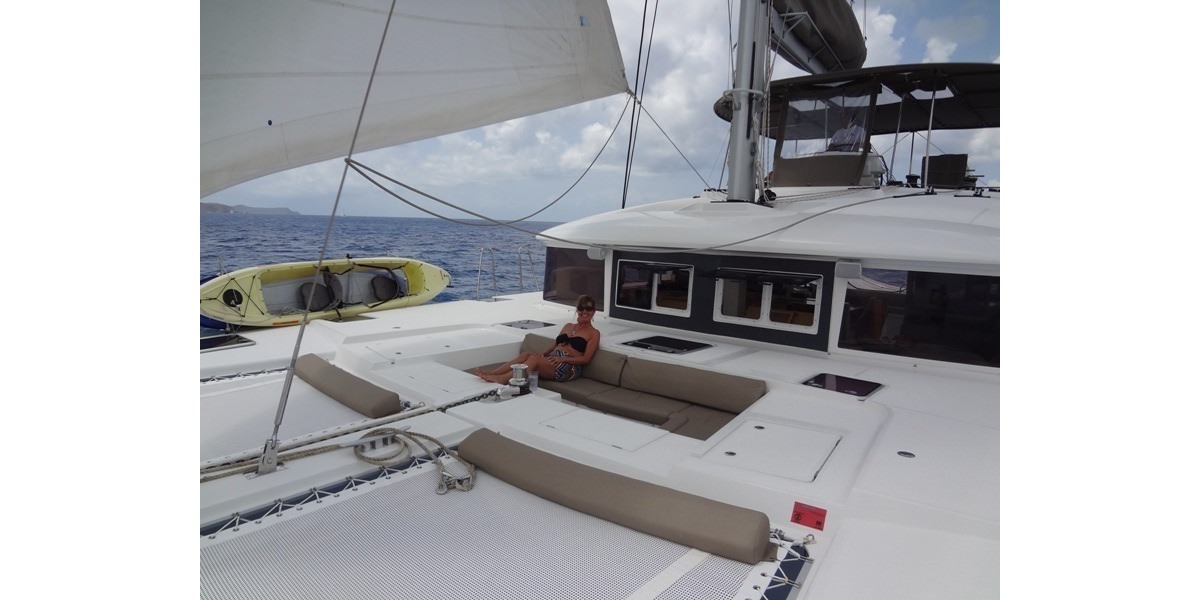 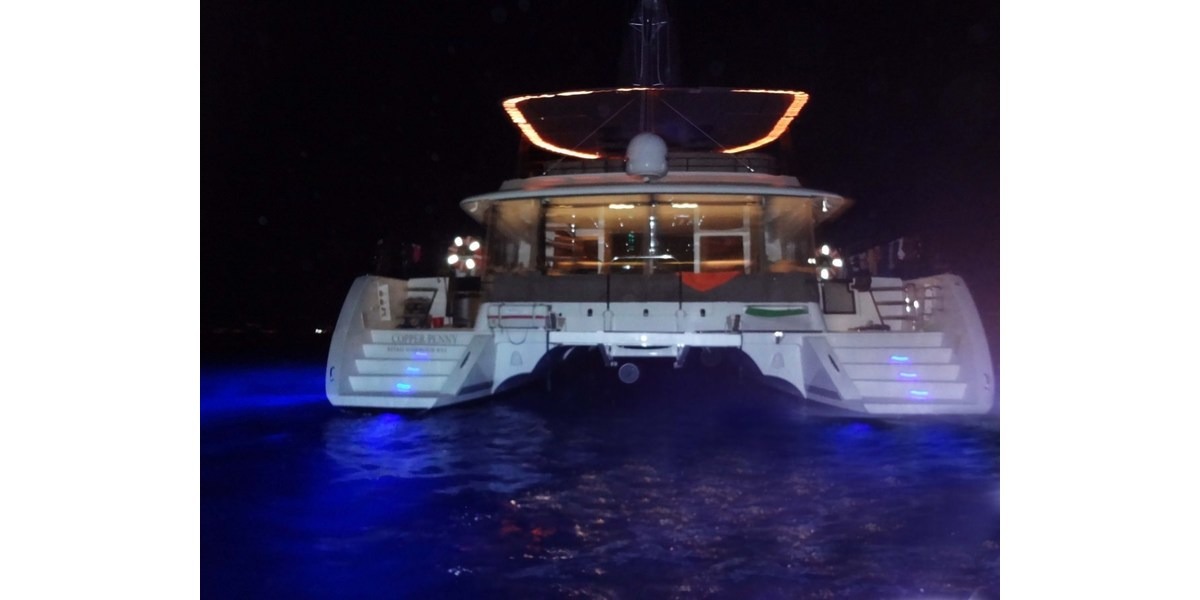 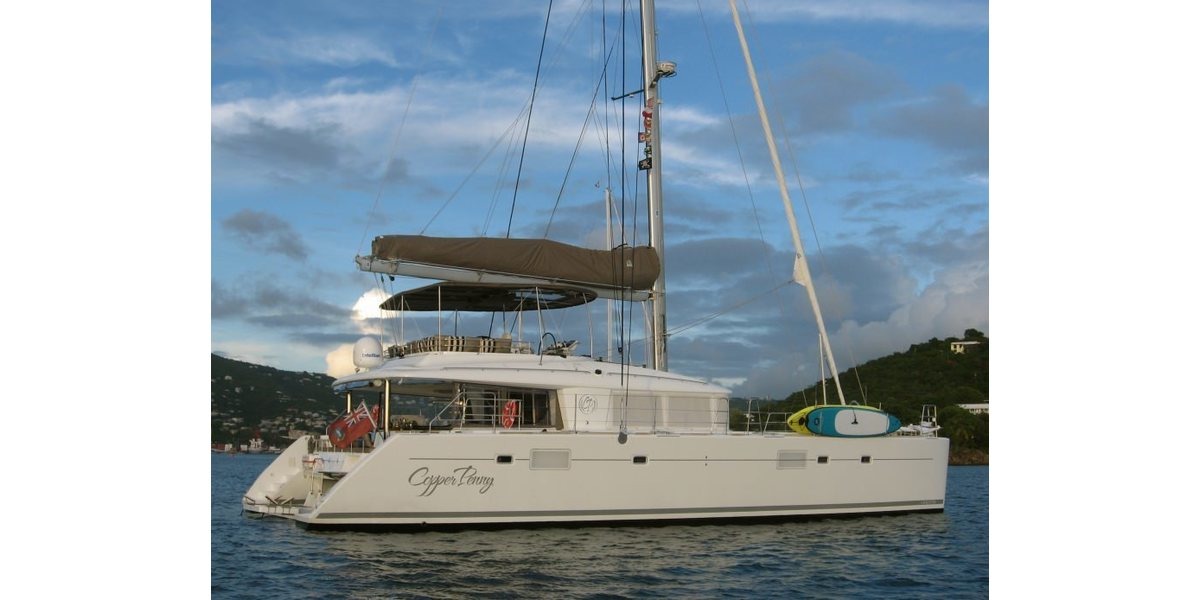 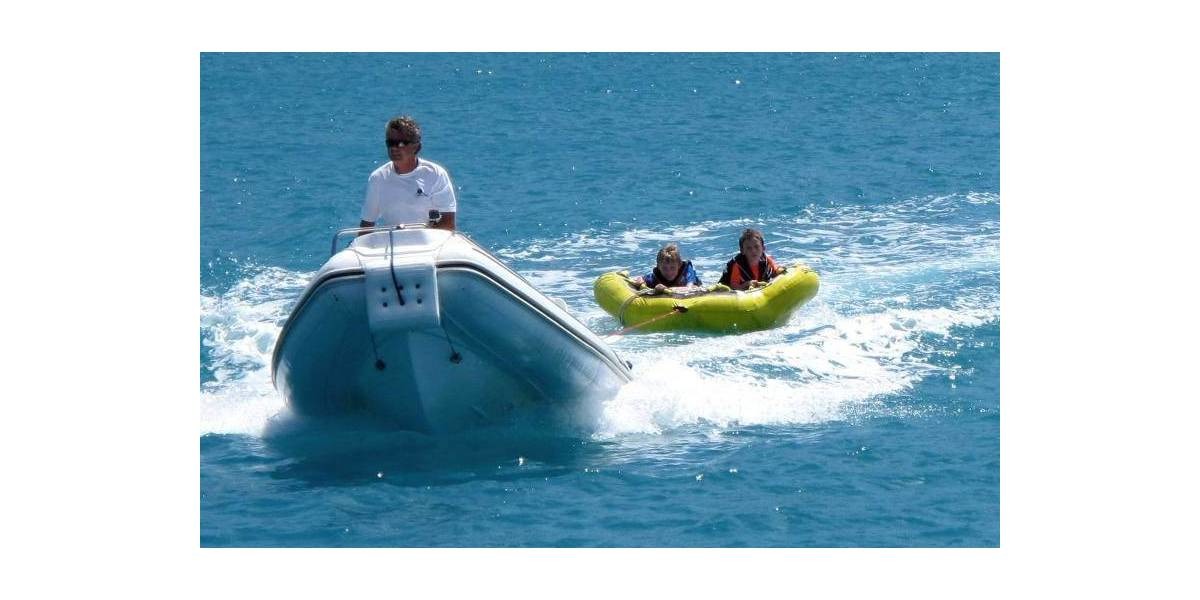 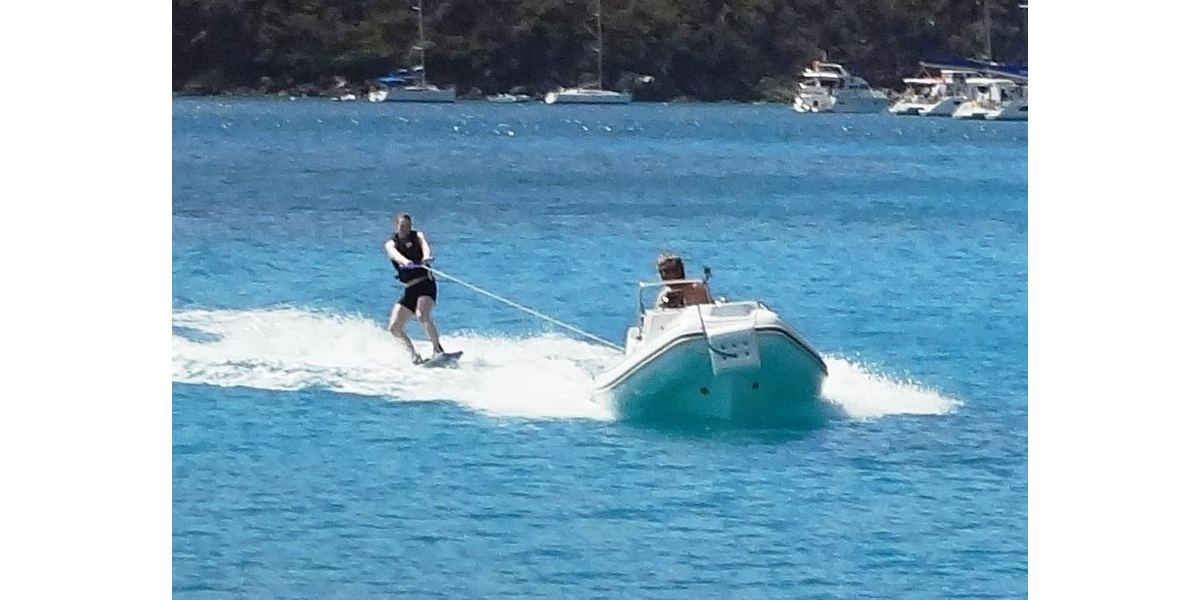 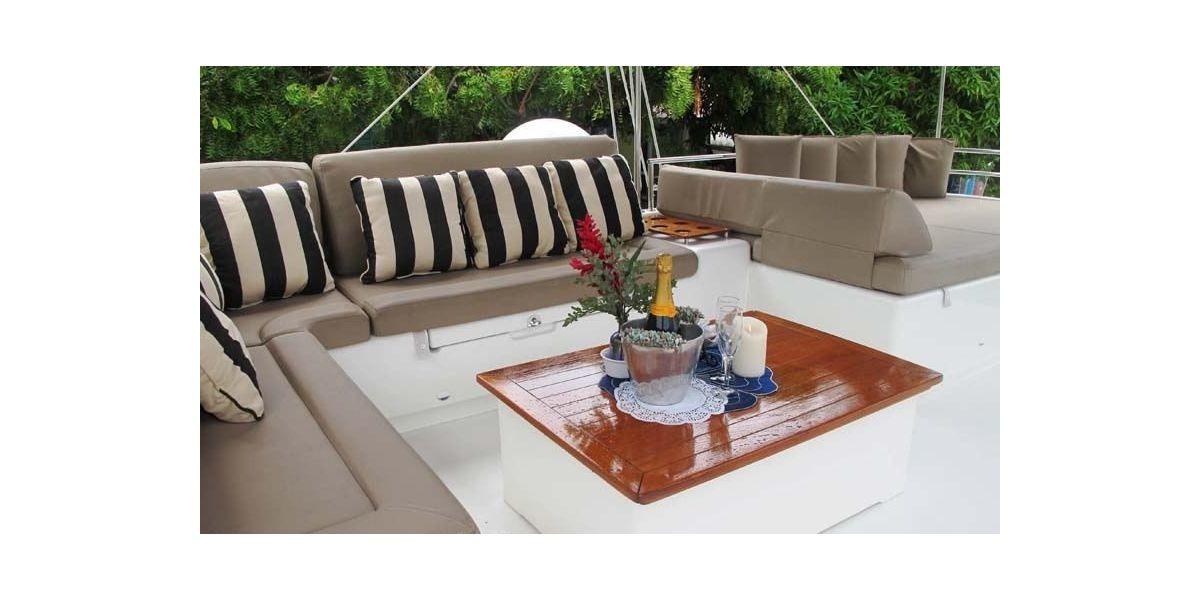 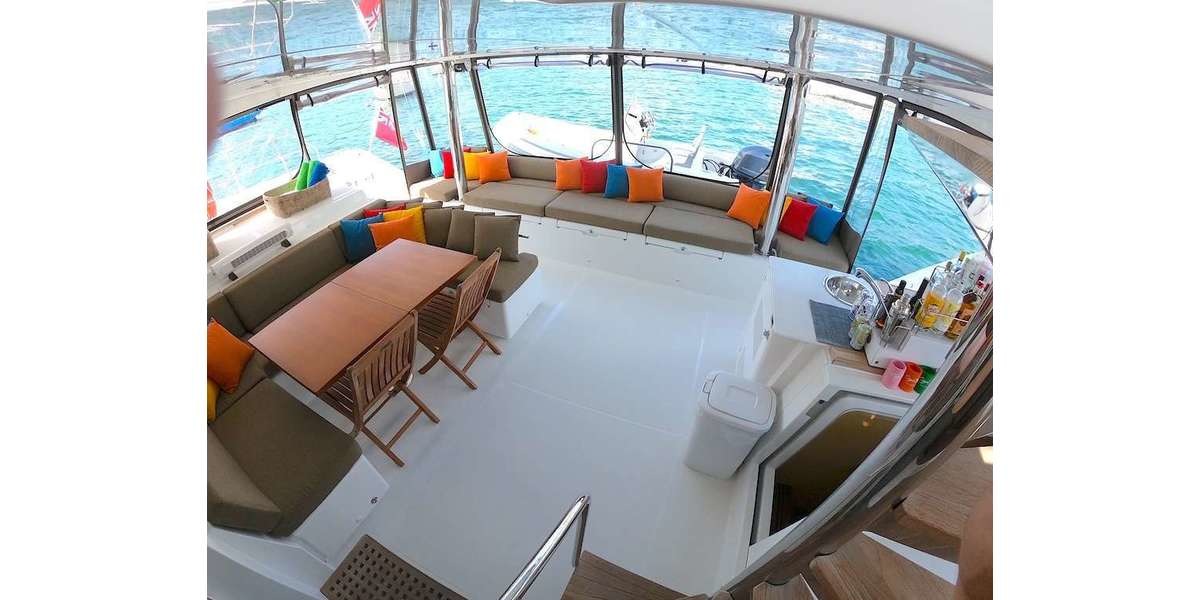 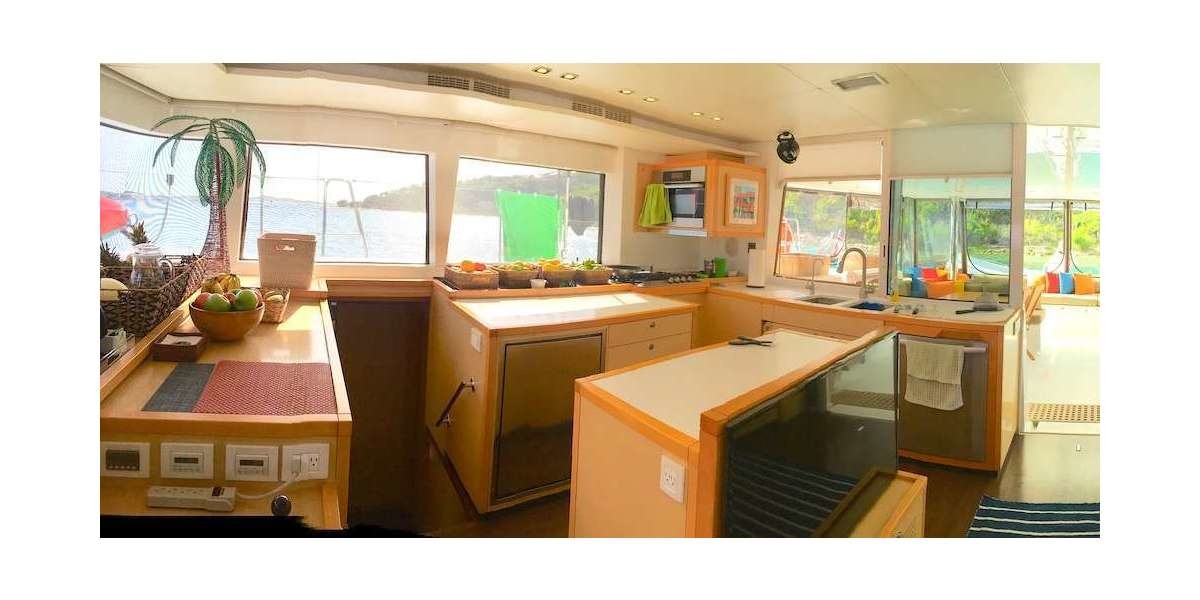 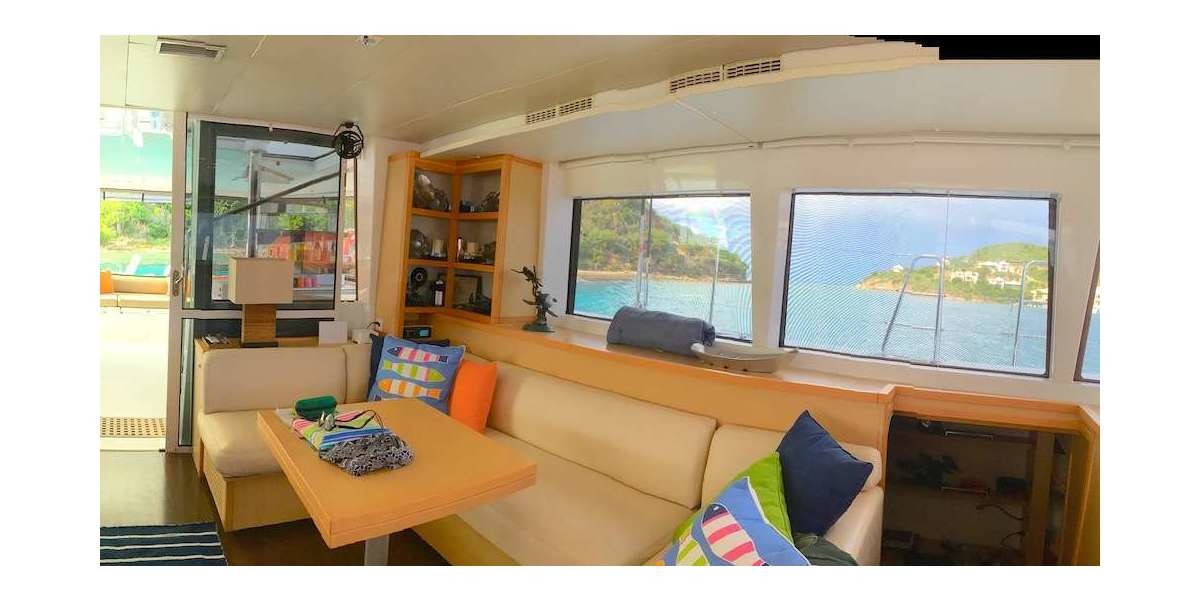 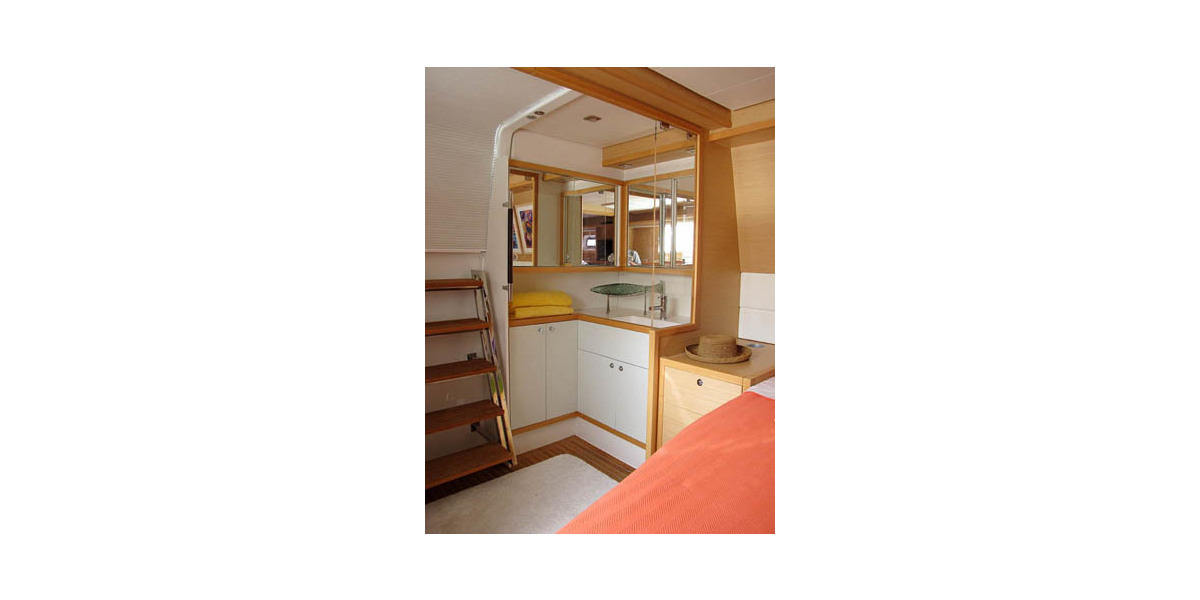 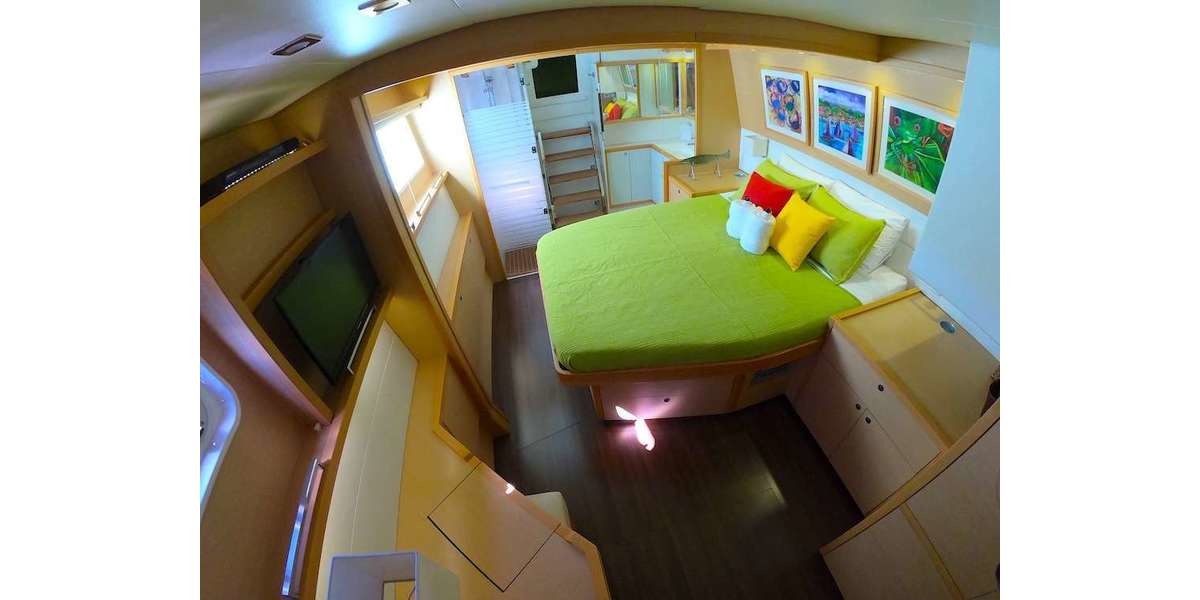 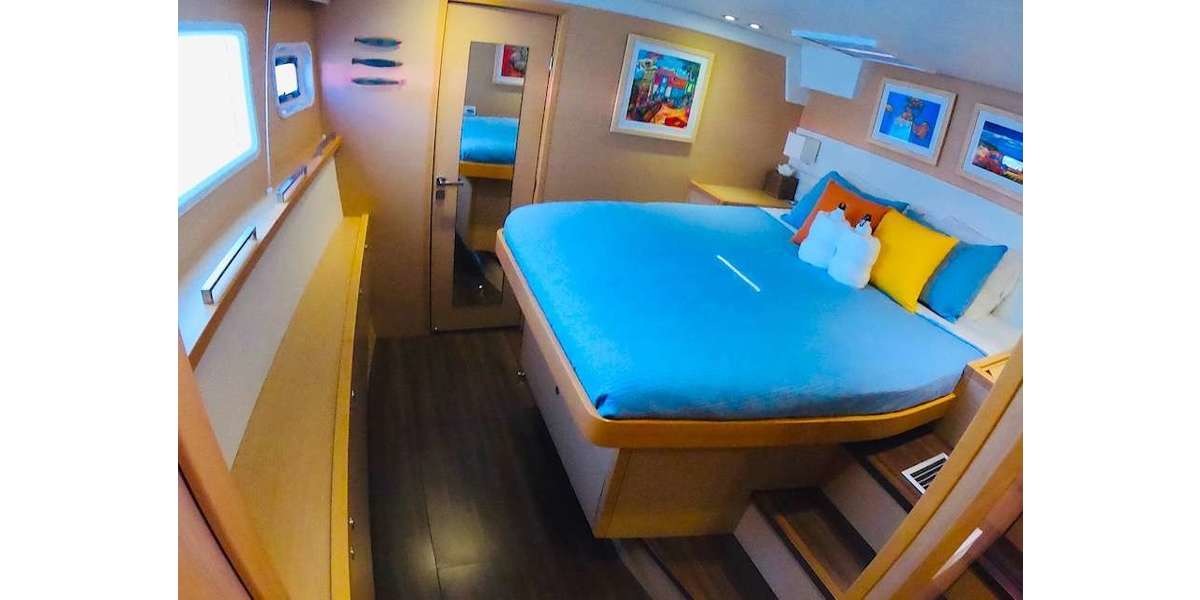 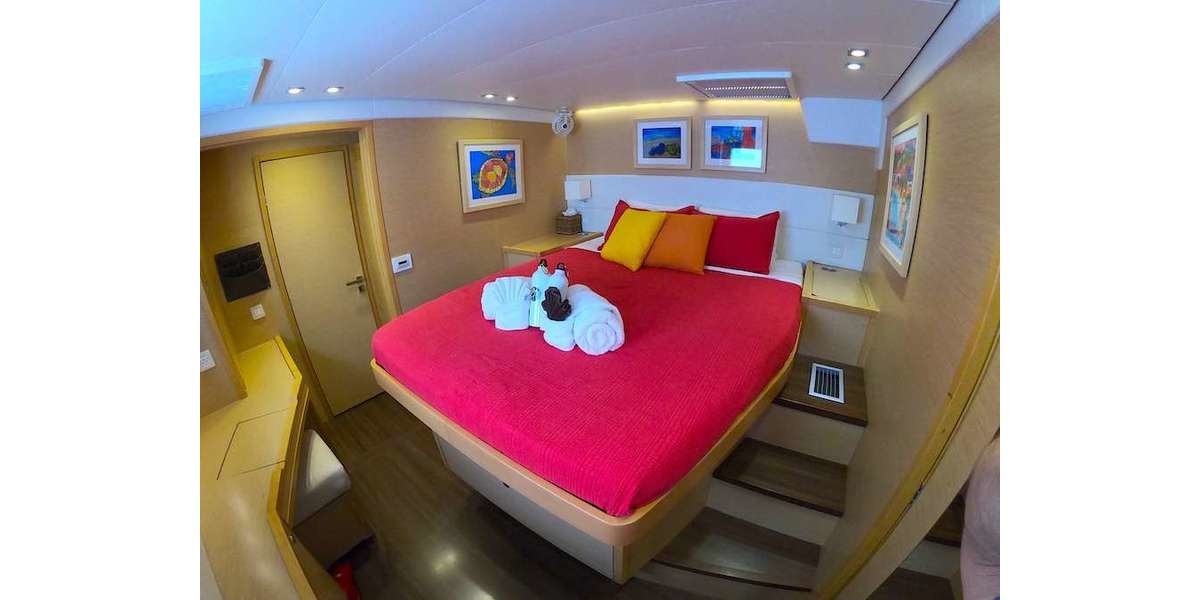 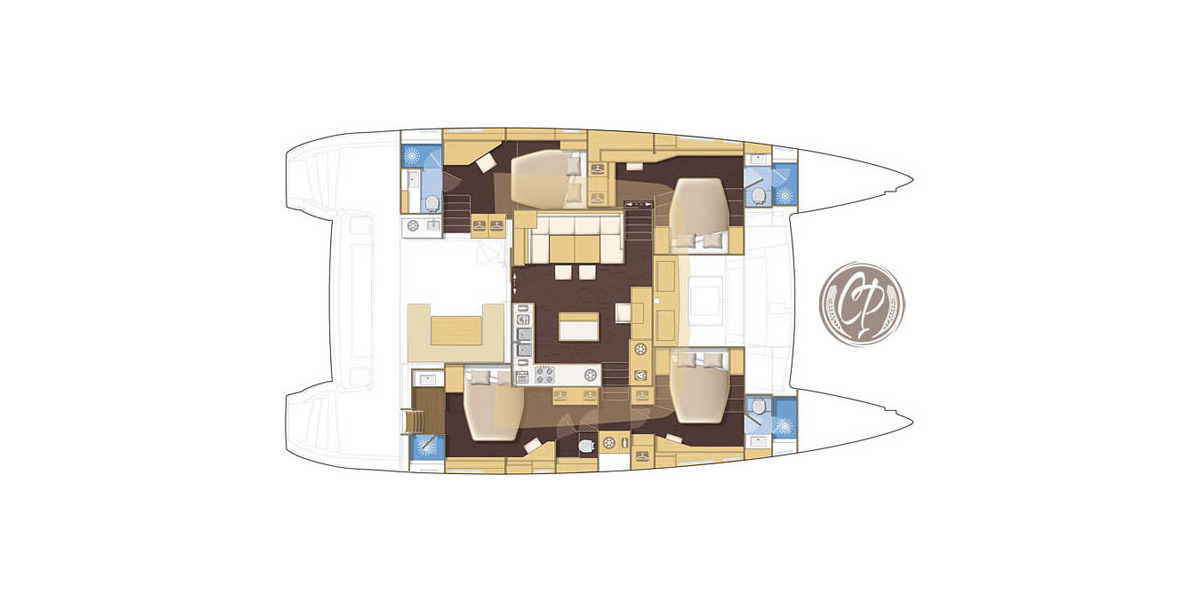 This unique and luxurious catamaran was built by the world famous builder Lagoon Shipyards, one of the most reliable and innovative builders worldwide. She was built in 2011 and has a refit in 2012, meaning that she is very modern and will make your cruise extremely comfortable. The salon and cockpit table are very spacious and will make your meals and relaxing time extremely enjoyable. She is equipped with a dinghy and a lot of water toys that will make your holiday fun and adventurous.

Jim, your captain, is a Canadian who grew up sailing on Lake Ontario. His family has always owned boats and Jim began his sailing instruction while attending summer camp. As a young adult Jim moved to Virginia, were he became bareboat certified and began chartering. In his corporate life Jim was a stockbroker. He was televised on Charlottesville, Virginia's NBC 29 nightly news for seven years sharing his market commentary with viewers. While working as a stockbroker, Jim found time to become a delivery captain for a Lagoon catamaran dealership, and began transiting the East Coast of North America. There he found his love for the open ocean. He obtained his United States Coast Guard Masters License, and later obtained a MCA 200-ton Offshore Certificate. Jim is also a certified PADI Dive Master, and looks forward to taking you diving. In addition Jim enjoys windsurfing, kite surfing, and skiing.

Amanda, your chef, is from Virginia. She grew up as a competitive swimmer and spent time backpacking in the Blue Ridge Mountains. Later, she discovered triathlons, and spent many hours training and competing. Jim introduced her to sailing, and life was never the same. She began sailing the Chesapeake every weekend, and accompanying Jim on some of his deliveries. Amanda's career as an engineer was demanding and gratifying, but soon she began dreaming of warm waters. During her years sailing the Caribbean, she developed a love for cooking and exploring local cuisine. To prepare for life as a charter chef, Amanda attended a mega-yacht cooking school in Fort Lauderdale, where she honed her skills. She looks forward to serving you beautifully presented delicious meals. In addition, Amanda is a certified PADI Dive Master, and a kayak instructor. Amanda's other interests include windsurfing, kite surfing, and skiing.

Captain Jerry has been sailing his whole life and comes from Baltimore Maryland USA, where he grew up sailboat racing on the Chesapeake Bay. He also sailed on the collegiate sailing team at St Mary’s College of Maryland. Jerry is a former US Sailing keelboat instructor. He has sailed extensively throughout the Northeast USA, Caribbean and has undertaken several Trans-Atlantic crossings. He holds a 100 ton USCG Masters license and has been a NAUI Scuba Instructor and PADI Divemaster for 25 years now.
One of Jerry’s great loves is teaching and as an avid water sports enthusiast, he enjoys sharing all his varied knowledge with guests of all ages. Jerry teaches lots of SCUBA courses from first time resort courses to full or advanced diving certifications.
Jerry is concerned with environmental issues especially to do with the coral reefs and is the Director of Reef Guardians BVI, which is a local non-profit group, fighting to save the coral reefs and manage the invasive Lionfish population in the British Virgin Islands. Jerry received the Champion of the Ocean Award in 2016 in recognition of his work protecting coral reefs. Come join Jerry on a Lionfish hunt and do your part to Save the Reef and learn more about marine life in the Caribbean Sea.
Due to the many years Jerry has spent living in the Caribbean, he is a great source of local knowledge and history. This ensures every trip is unique, fun and interesting and because of this he can also take you to ‘off the beaten path’ secret location and remote anchorages, making your trip even more special.

Dawn is British, born in North Wales amongst miles of coastline and a backdrop of mountains including the famous and spectacular Snowdonia range, where her love for nature and the outdoors grew from. Living by the sea she spent many hours with her family on boats. She passed her love for sailing onto her two children. Dawn has always enjoyed cooking for family, friends and charitable events. She is a trained RGN nurse, specializing in pediatrics, community, and ophthalmic nursing, and worked as a medical equipment consultant.
Dawn’s passion for the outdoors has led her on cycling tours through Vietnam, hikes up the three highest mountains peaks of Great Britain, and numerous sailing events. She has taken part in many long distances offshore sailing races, most notably the Fastnet Race. She was involved in forming the first "all female" team to Sail in the Non-Stop around Britain and Ireland Race. Her experiences of cooking on racing boats led Dawn to produce the Swell Food recipe book, for sailing enthusiasts. All proceeds were donated to Sail4Cancer, enabling those suffering from the effects of cancer to have sailing opportunities.
Dawn believes the ocean is a big playground and loves to scuba dive and enjoys underwater photography. She is enthusiastic and likes to encourage children to learn about the importance of caring for our oceans and the beauty and fun they can provide. Along with Captain Jerry she supports Reef Guardians.
As a nurse Dawn has gained an understanding of the importance to cater for varied dietary requirements. All menu preferences including food allergies, likes and dislikes, diabetic, gluten, vegetarian and lactose to name a few she caters for. She continually strives to provide exquisitely presented nutritious and balanced meals.