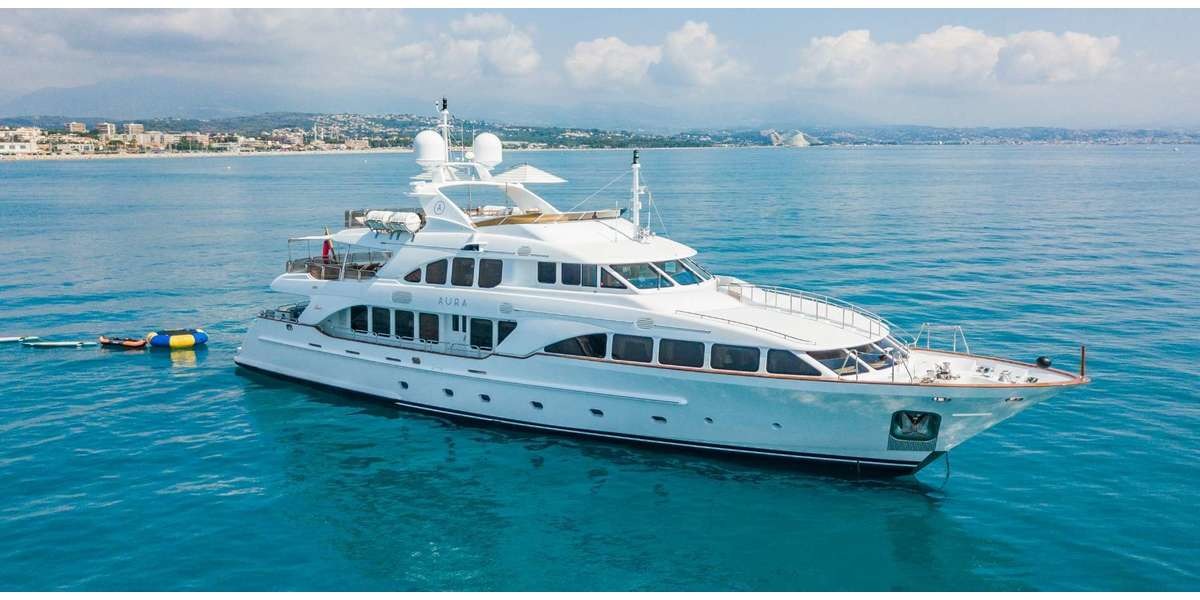 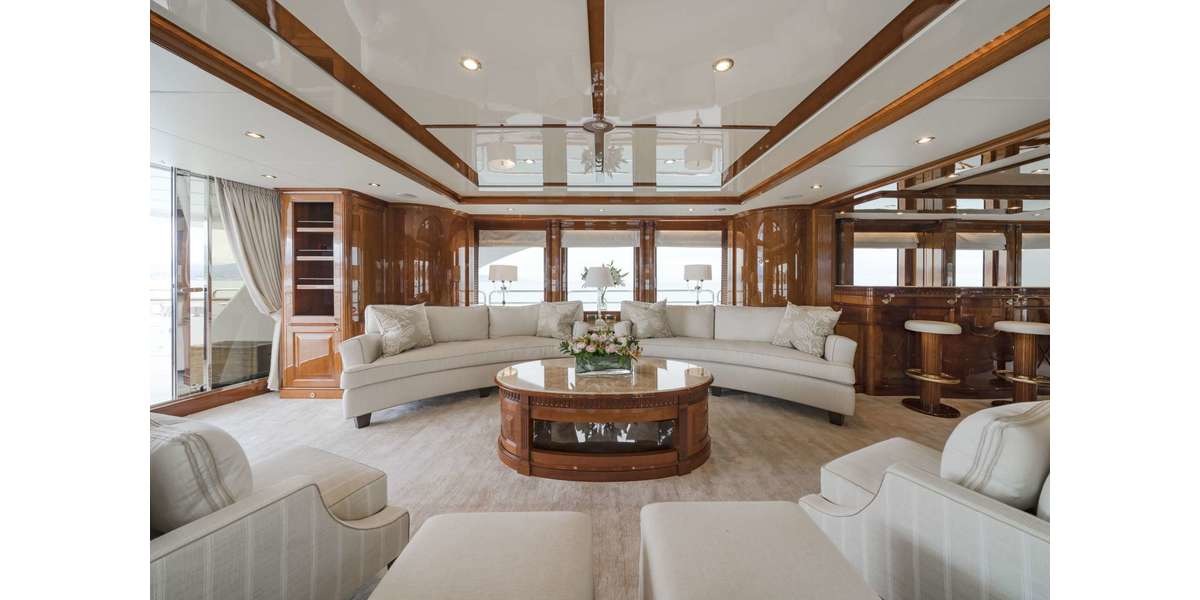 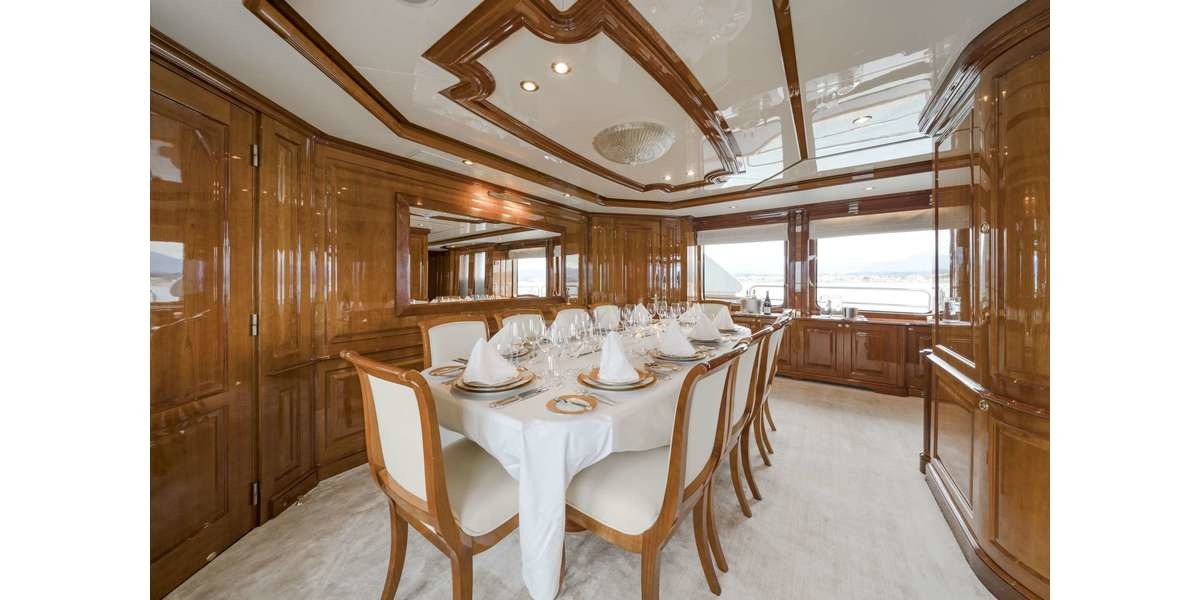 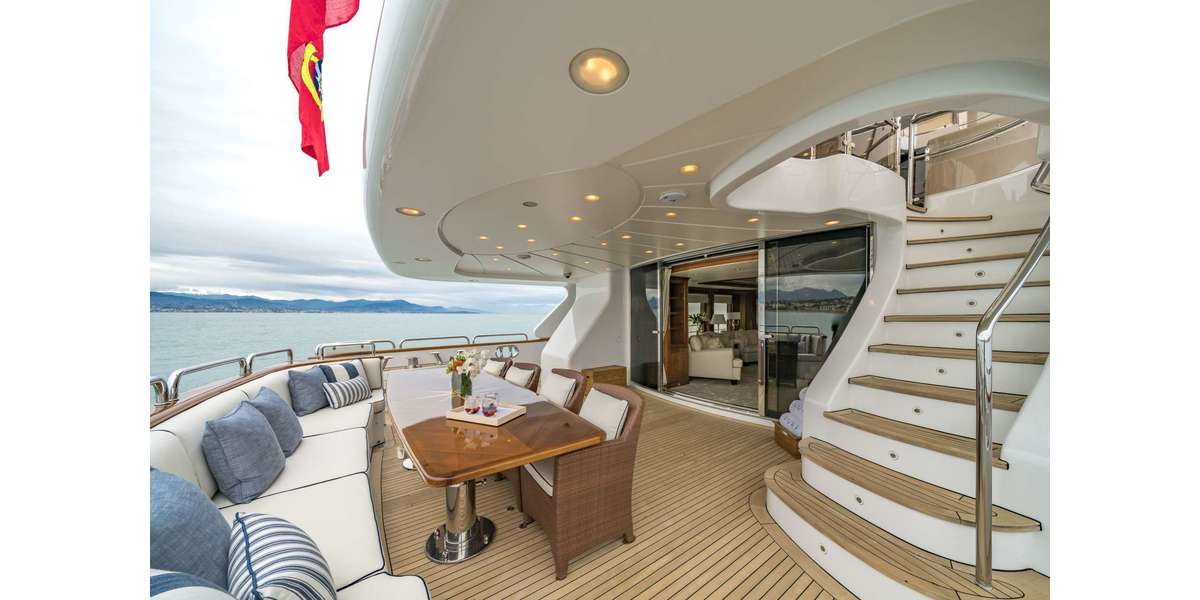 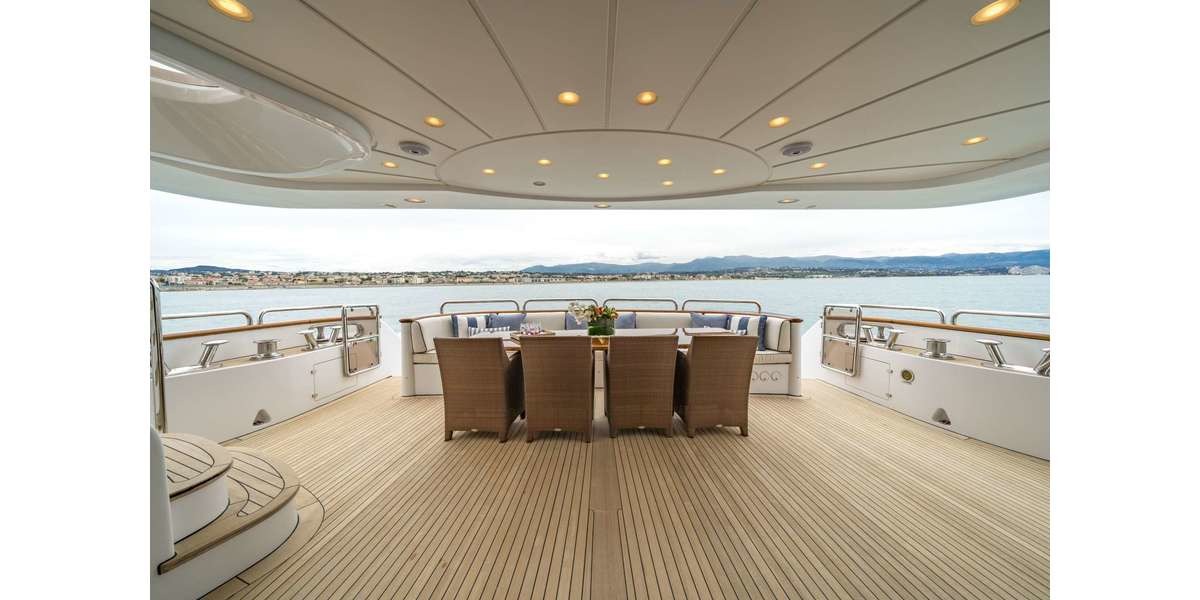 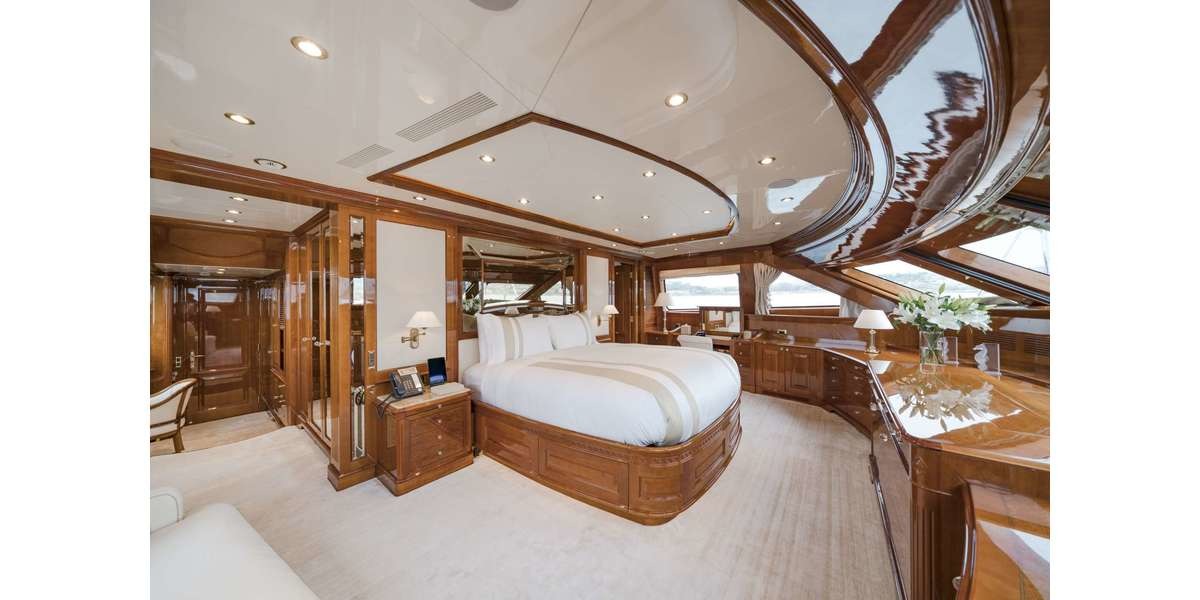 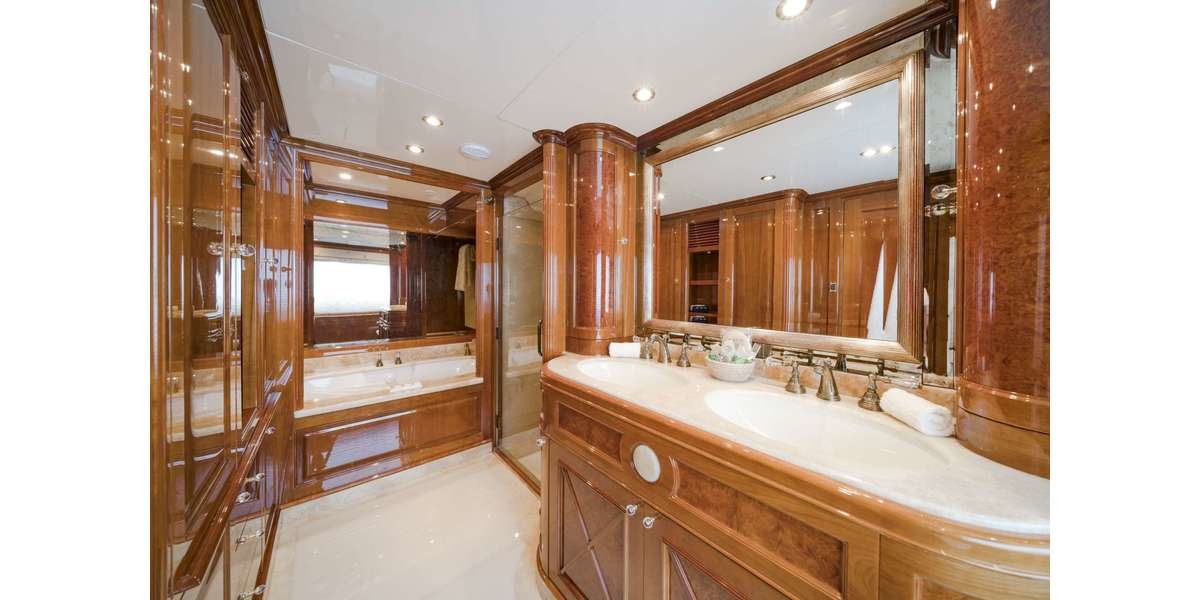 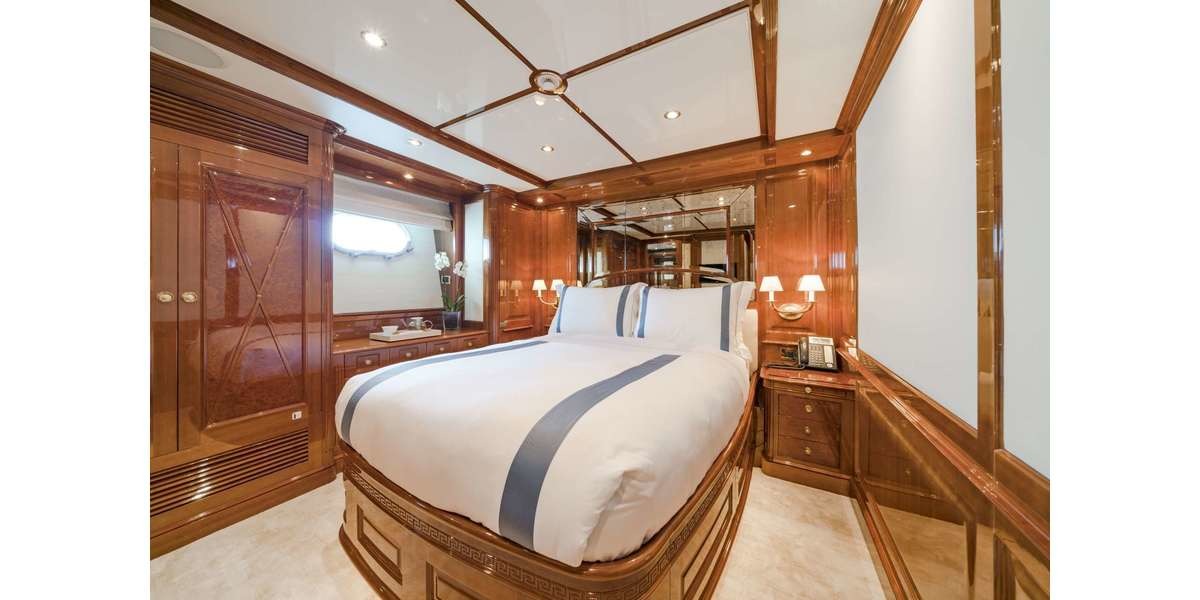 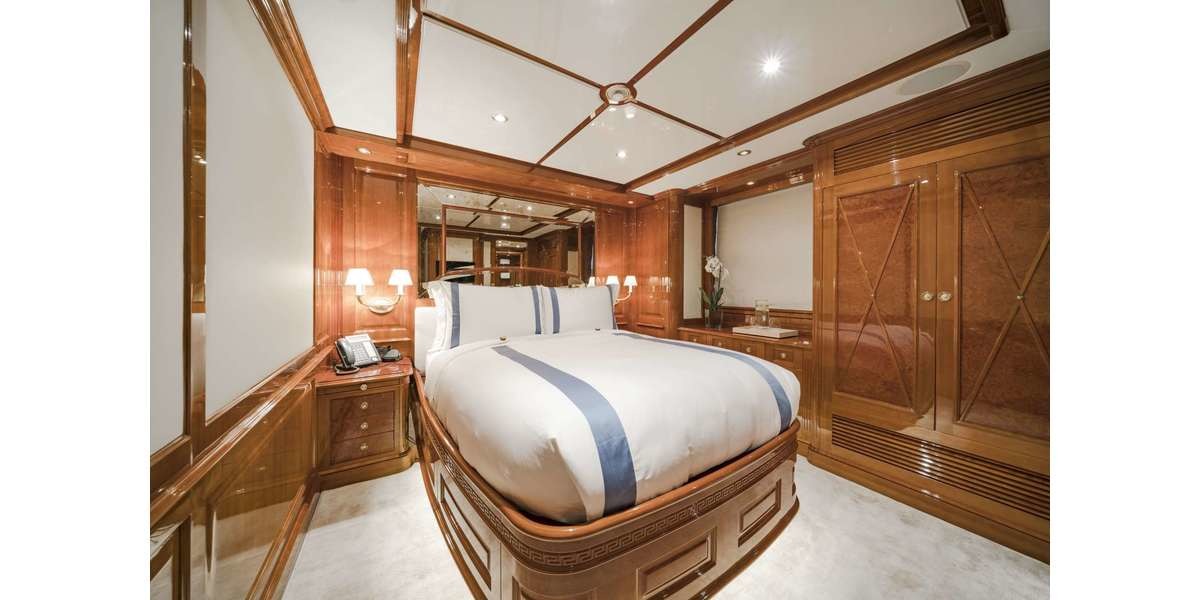 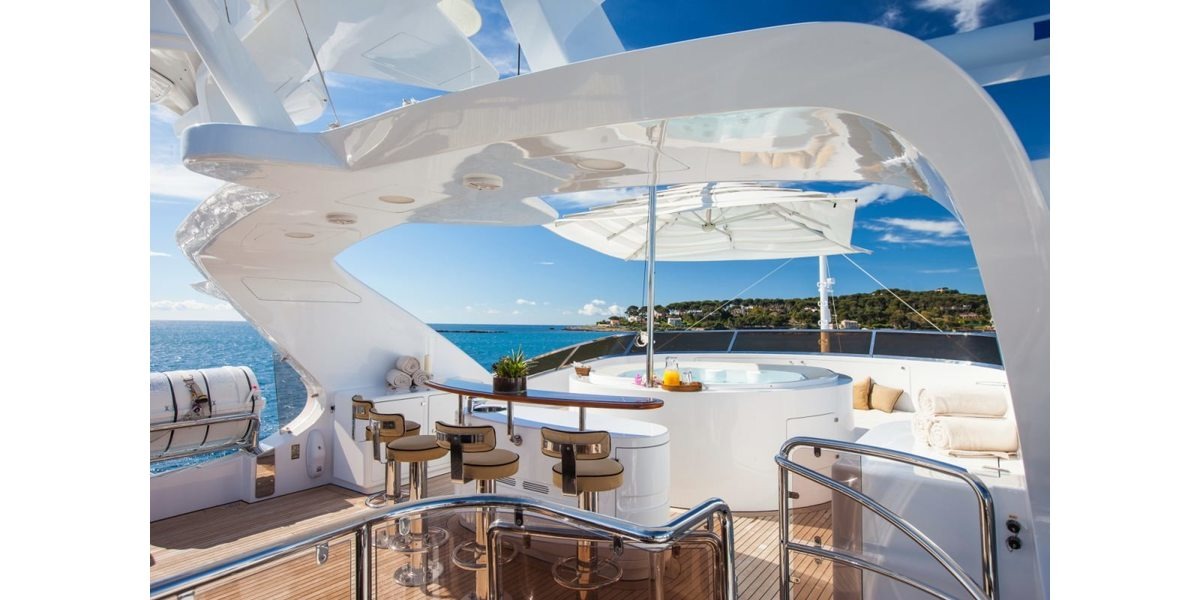 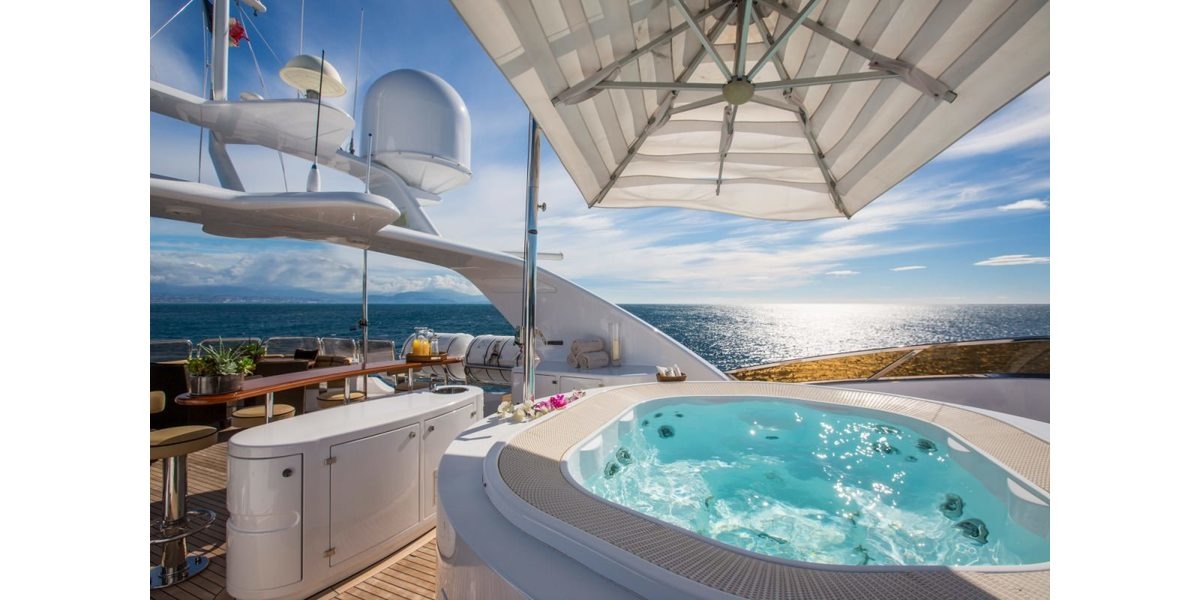 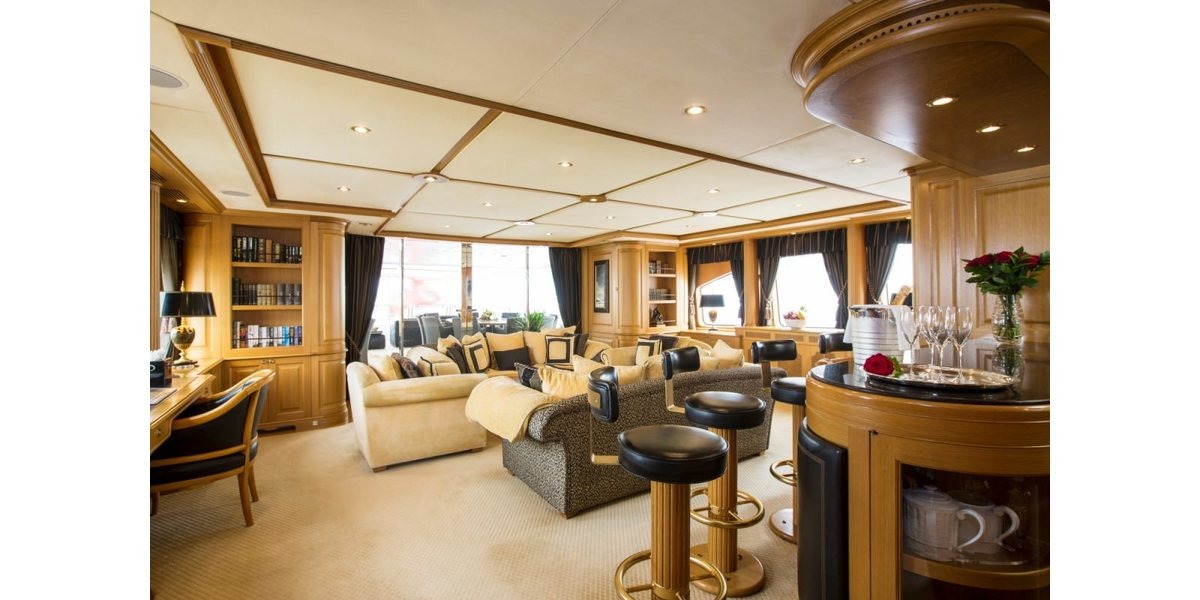 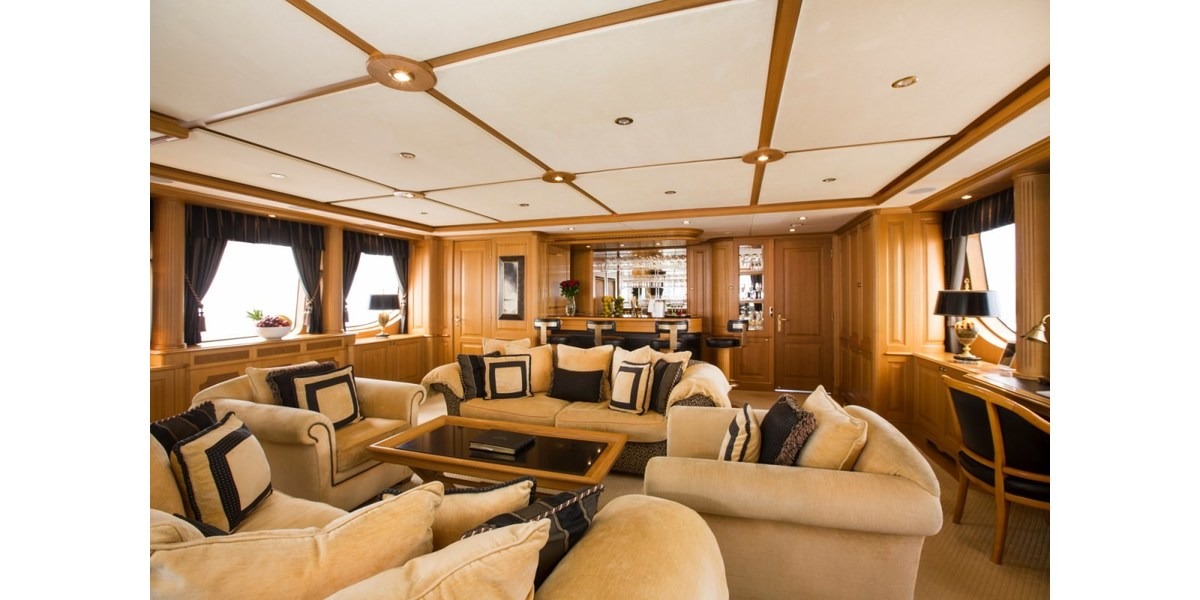 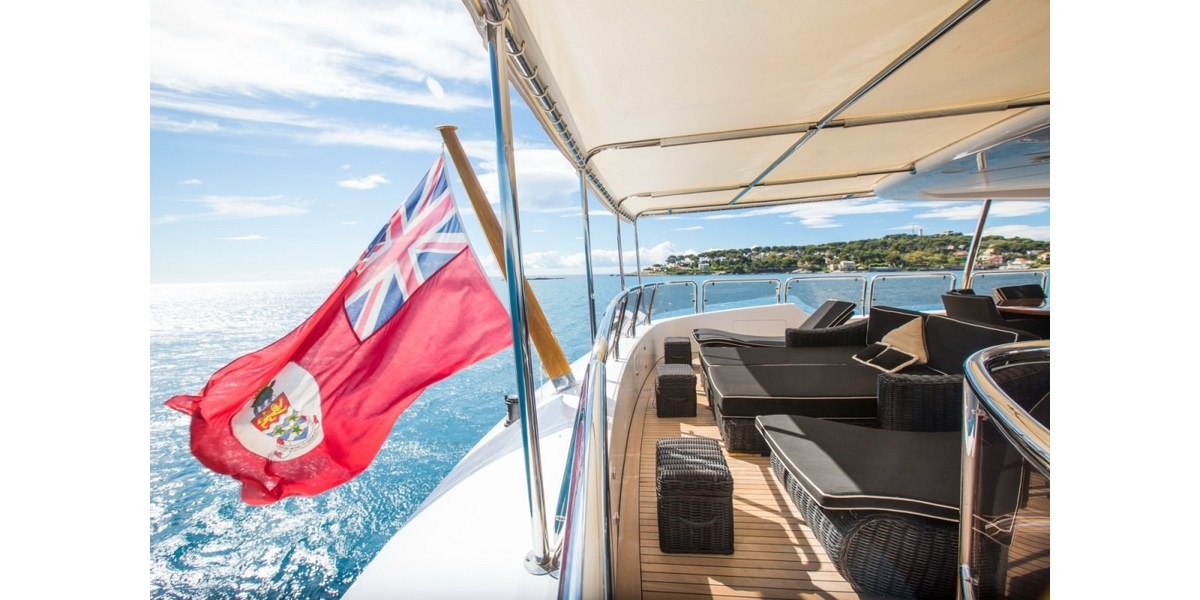 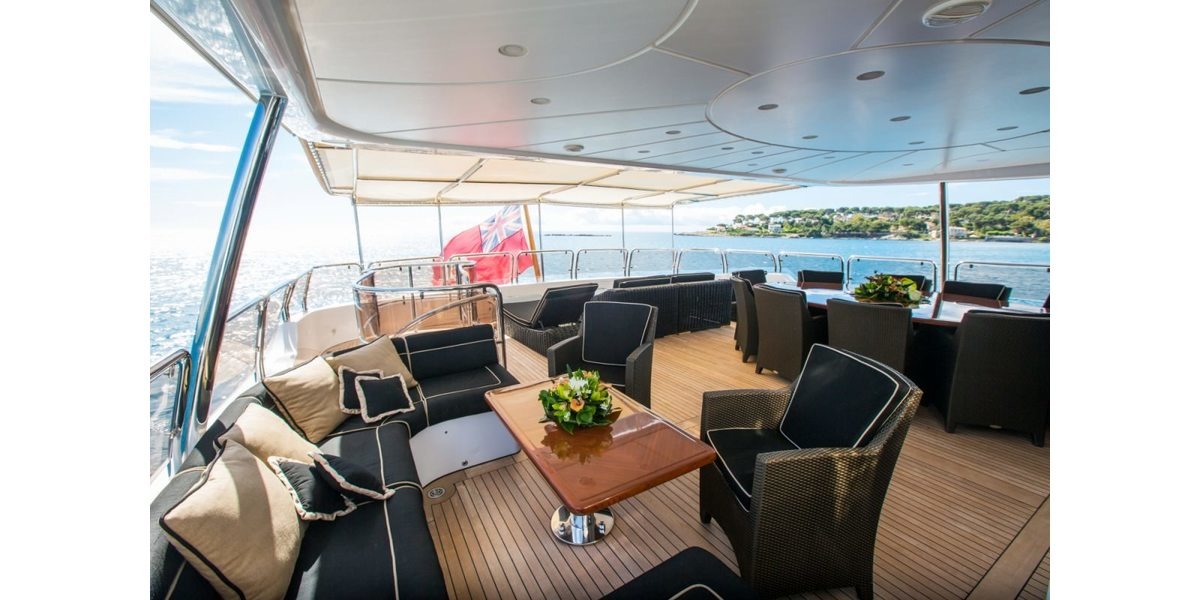 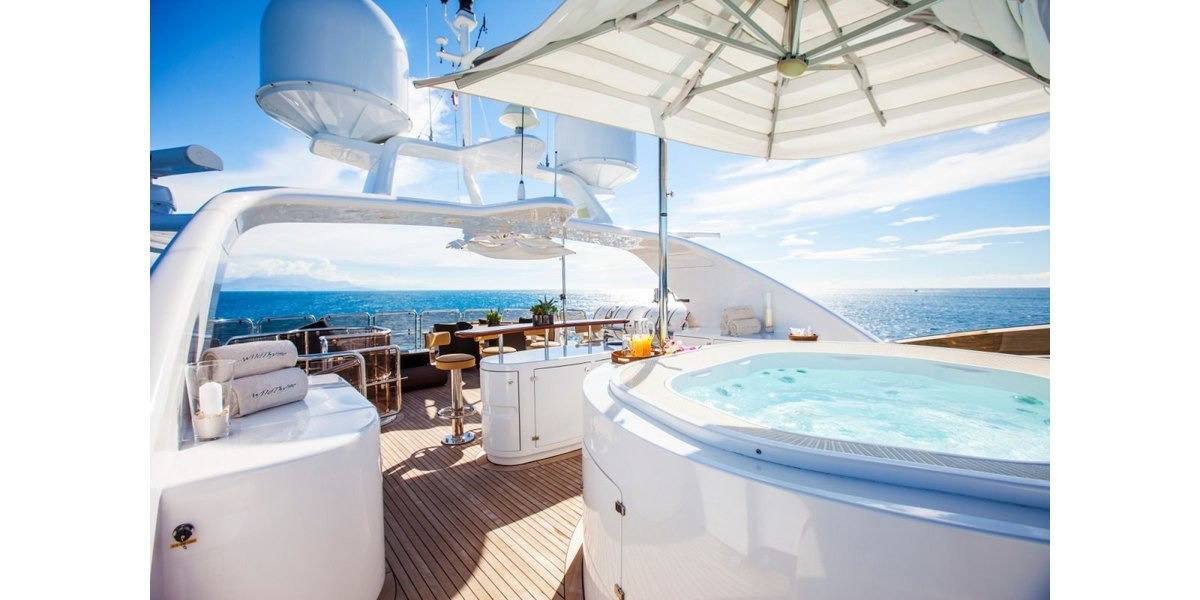 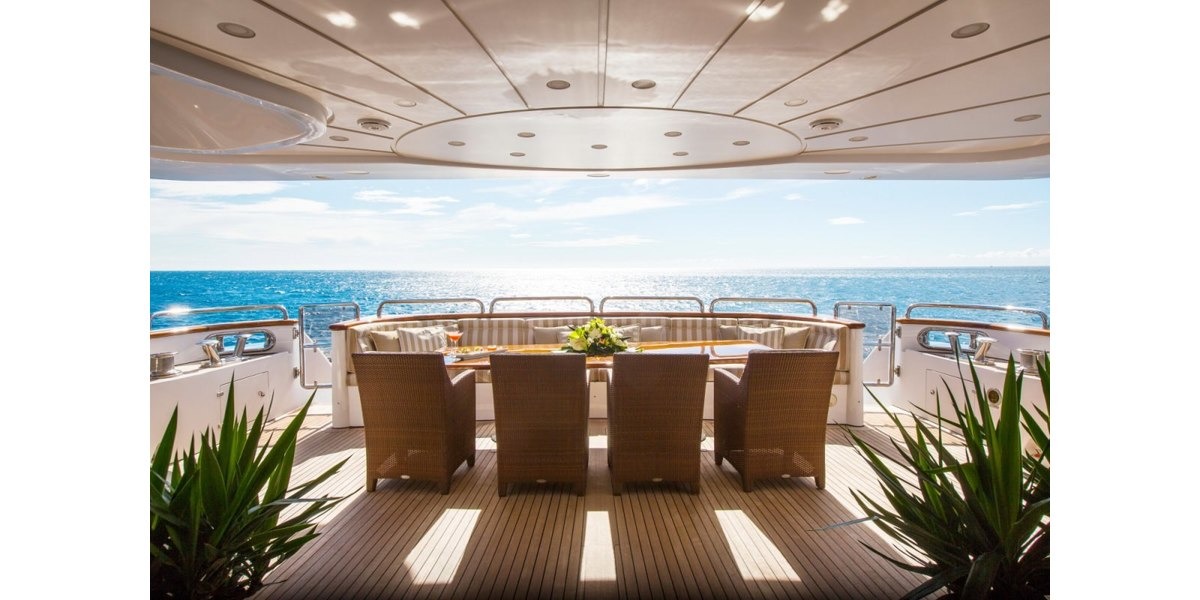 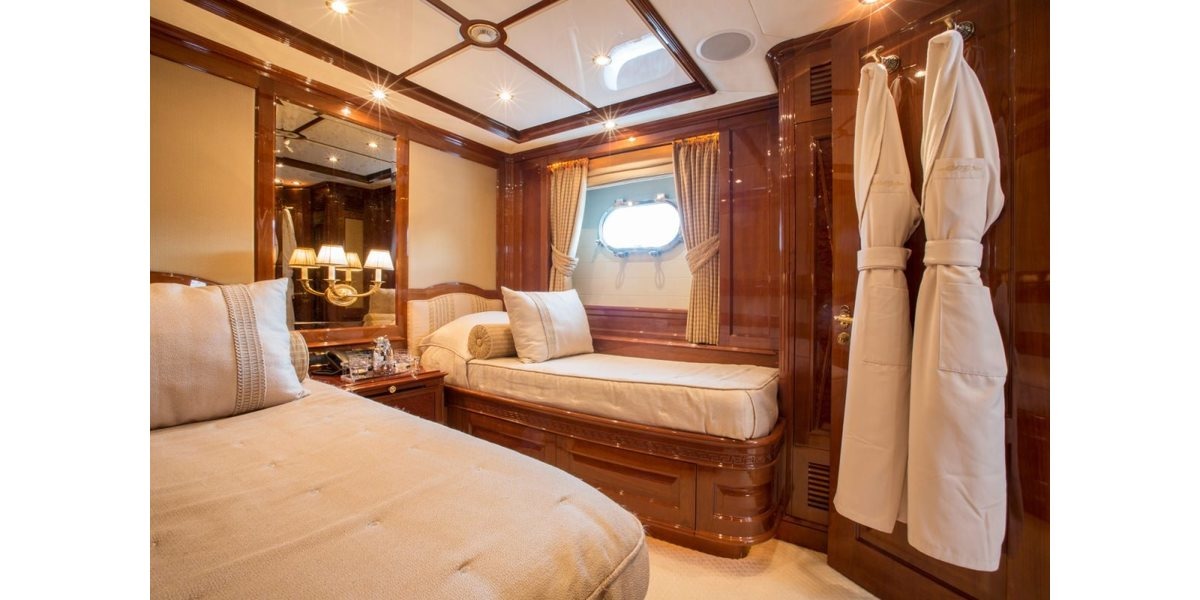 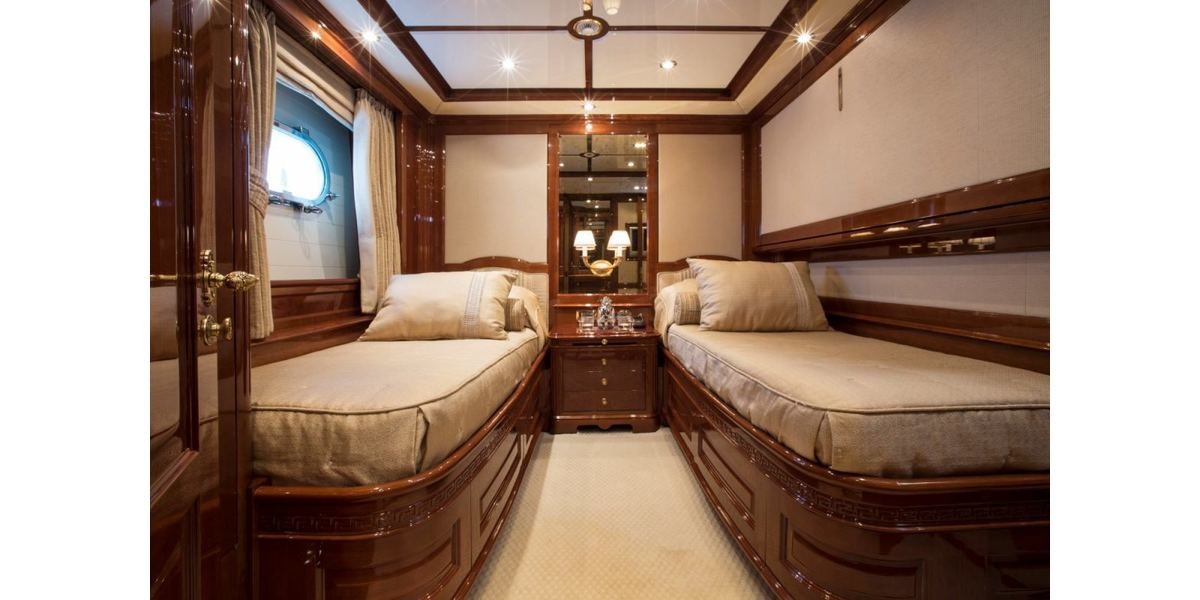 The overall impression that this yacht provides is one of elegance and sophistication. The interior decor of this beautiful Benetti has a chic contemporary edge; with warm colours and attention to detail that create a relaxing and tranquil environment in which guests can unwind.

Audio & video systems are on demand throughout the yacht keeping her up to date with modern trends, including New Apple TV system, I-pod docking stations throughout, SKY TV, flat screen televisions in all cabins and lounges, portable TV + plug in points at all external seating areas including the sundeck, Jacuzzi and barbecue.

She sleeps 10 in sumptuous surroundings with 3 double and 2 twin cabins, all with exquisitely designed soft furnishings and marble bathrooms. The Owner’s Cabin and Bathroom are sheer opulence themselves, with gorgeous silks in softest ivory and gold and offering a stunning view from the panoramic bow window.

For those who prefer to be outside, she offers ultimate luxury in cool comfort with al fresco dining, deck Jacuzzi and an array of exciting water toys for the more adventurous charterer!

The yacht has a dedicated crew of 7 to cater for your every need and who, as you would expect from a yacht of this standard, offer a service to exceed expectation.

From the moment that you step on board this yacht you know you are in good hands. Impeccable service, fine dining and all the little details that add together to make the difference between an ordinary vacation and a spectacular experience.

Equipment on the Superyacht

Ben a South Pacific born English-man, has had a yachting career spanning more than 18 years, with the last 10 years as Captain on both private and charter yachts. it could be said that Benjamin was always destined for a life on the high seas. After graduating with a BSc (Honours) degree in Biomedical Science, Benjamin decided to take a well-deserved summer break in the South of France and the rest they say is history.
Ben spent 9 years as Captain onboard the very successful charter yacht M/Y Little Jems only leaving as the vessel was sold. The past two season he has been Captain onboard the 41m M/Y Namaste 8.
Ben tries to instill an effective, efficient and harmonious atmosphere onboard. He is a very proactive person who endeavors to lead by example.
Aside from his various marine qualifications, Benjamin is also a qualified Personal Trainer, Sports Therapist and Masseur. Benjamin is a keen sportsman and enjoys participating in a wide variety of sports be it on land or water.
Previous yachts: M/Y Namaste 8 (41m), M/Y M/Y My Way, (41m), M/Y Little Jems (26m)
Languages: English and basic French

Damon is a qualified aircraft and helicopter mechanic and has worked in the aviation industry for the past 5 years, he has now decided to make yachting his career choice.
Although this was Damon’s first permanent job in yachting he has grown up with a sailing background as his family have always owned boats in South Africa.
Hobbies include: Motor cross, wakeboarding, fishing and skate boarding.
Languages:English

Kathleen hails from Jeffrey’s Bay in South Africa and is a trained dancer and yoga teacher. It was her love for travel and desire to explore that attracted her to the yachting industry and in 2012 she landed her first job as sole stewardess on the busy charter yacht M/Y Happy Hour (32m) before moving quickly onto M/Y Siram (54m).
Kathleen’s prior experience in high end hospitality installed in her an efficient manner, creative thinking and professionalism – all skills that she mirrors today.
In her spare time, Kathleen is unable to resist her love for sport and she is at her happiest when she is involved in any kind of sporting activity.
Languages: English, Africaans

British born former HGV driver, Russell has been working in the yachting industry as anengineer since 2013. His career so far, has seen him working on a variety of vessels and he has worked hard to obtain the Y3 CoC certification. Joining Aura in May 2018 Russell looks forward to being an integral part of the crew and when not in the engine room he is a keen motorcyclist who loves paragliding and a multitude of sports
Previous Yachts: 2nd engineer MY Seanna (64m), sole engineer MY Nauta (33m), 2nd engineer MY Lady Kathryn (61m)
Languages: English

Chris grew up in a family business of restoring and repairing classic British cars from Jaguar, MG and Rolls Royce as well as having boats in the family either going to the dam or Hermanus lagoon for fishing and leisure trips with water sports (skiing, doughnuts and jet ski).Having completed his yacht master sailing from Cape Town to Madagascar in 2015.
Previous Yachts: M/Y Basnalina II, M/Y Yalla (47m)
Languages: English