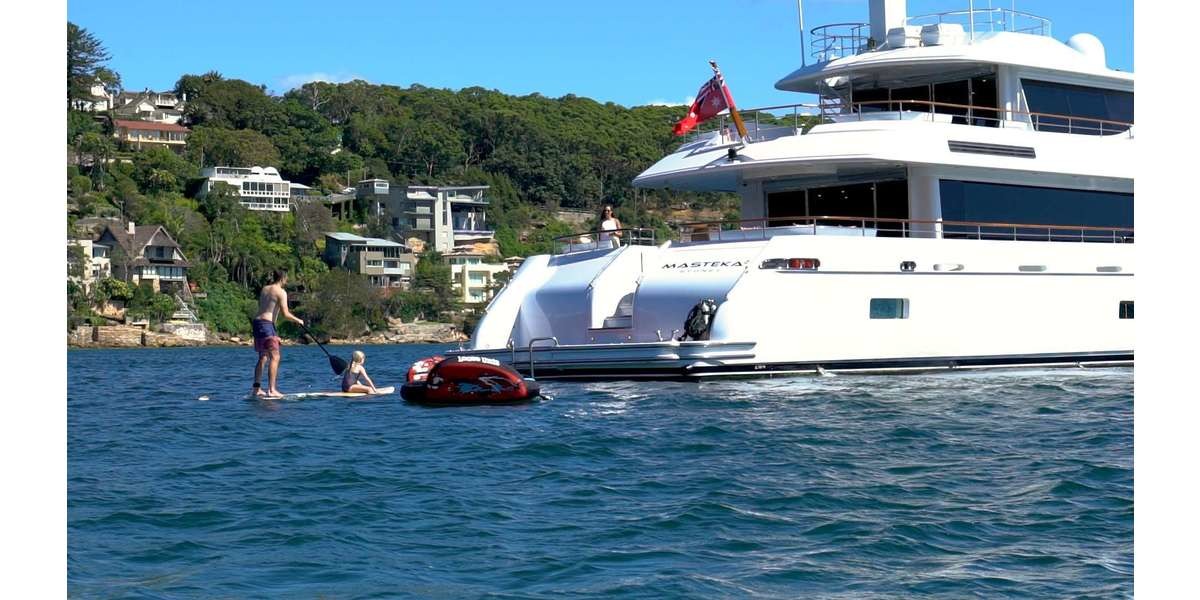 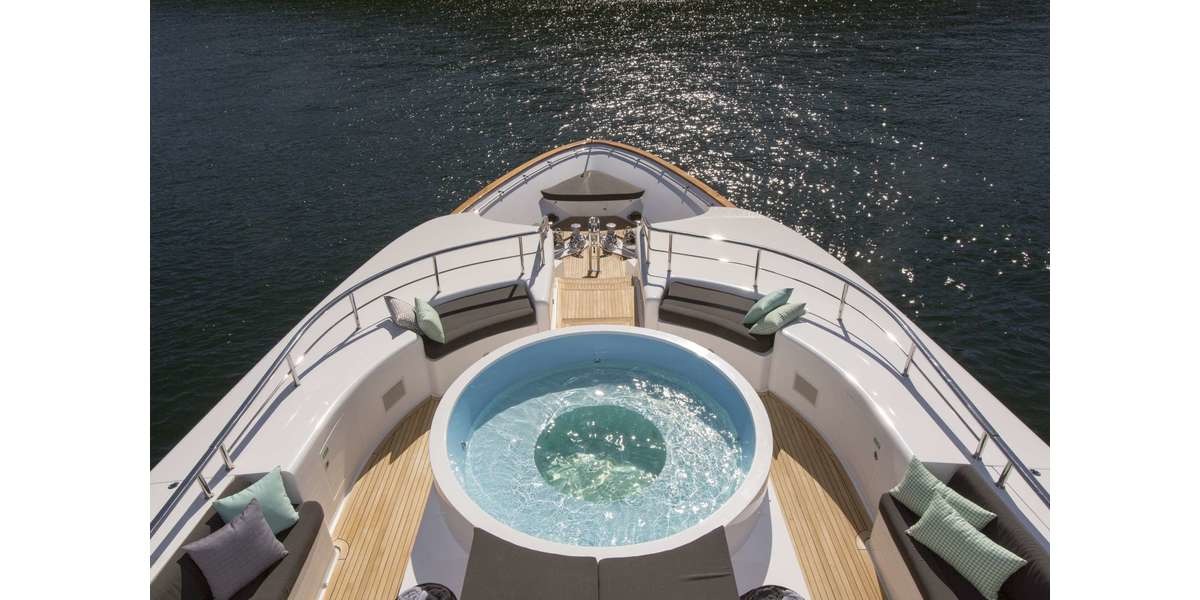 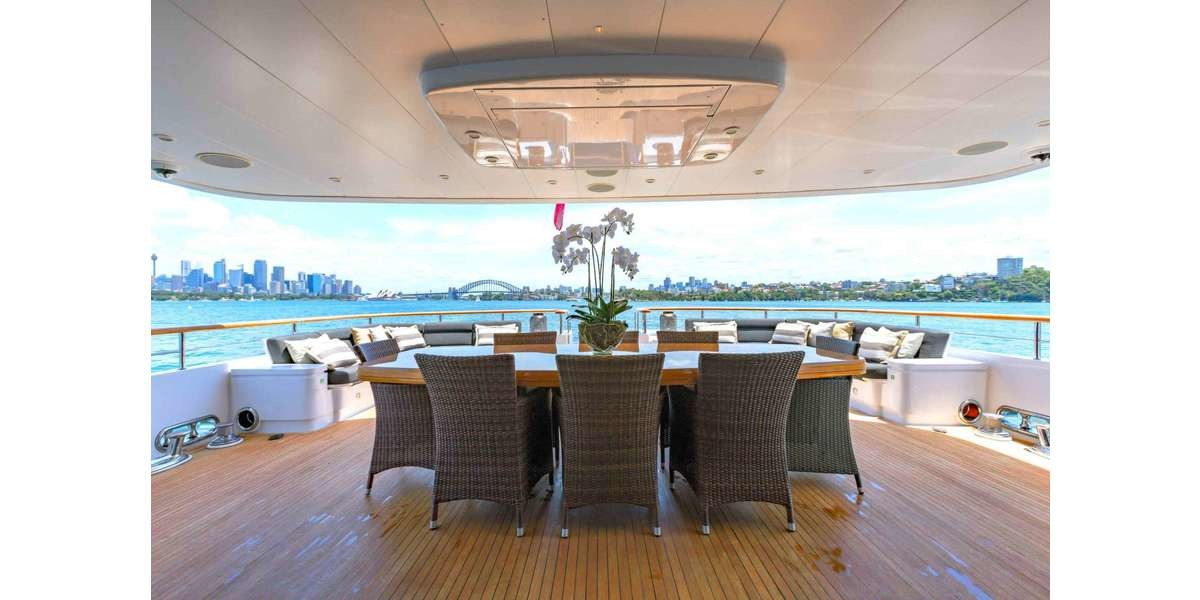 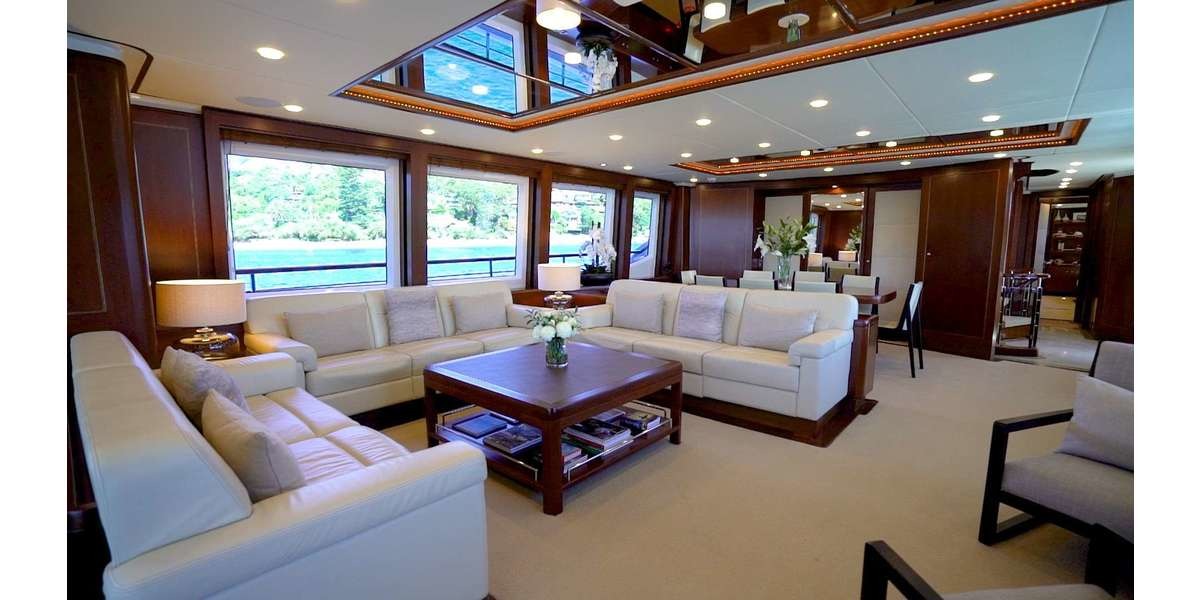 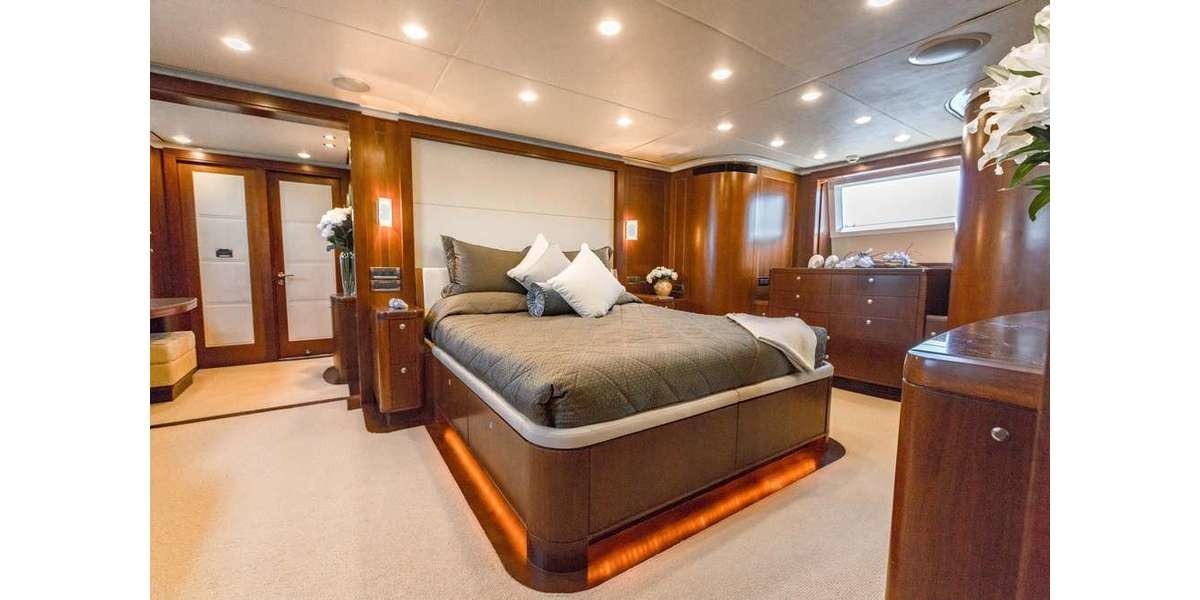 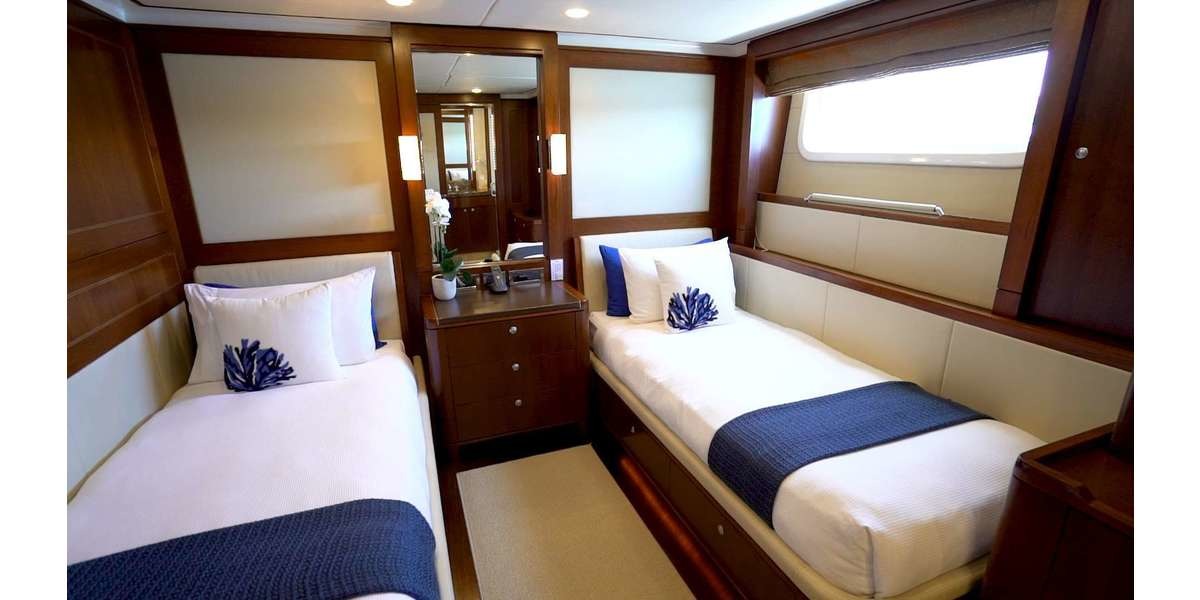 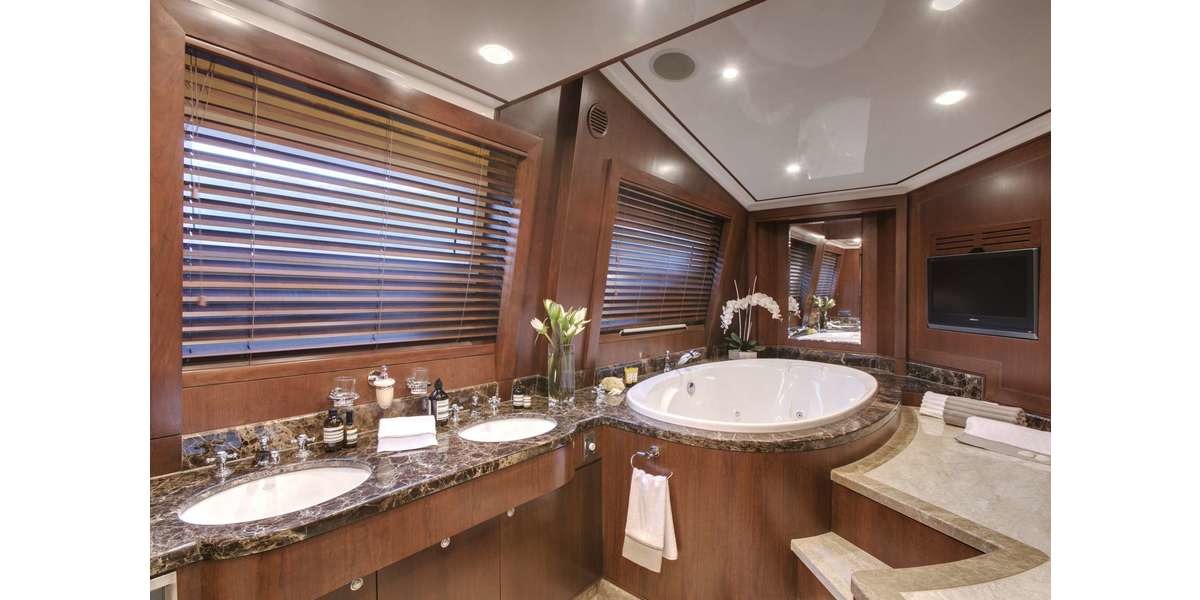 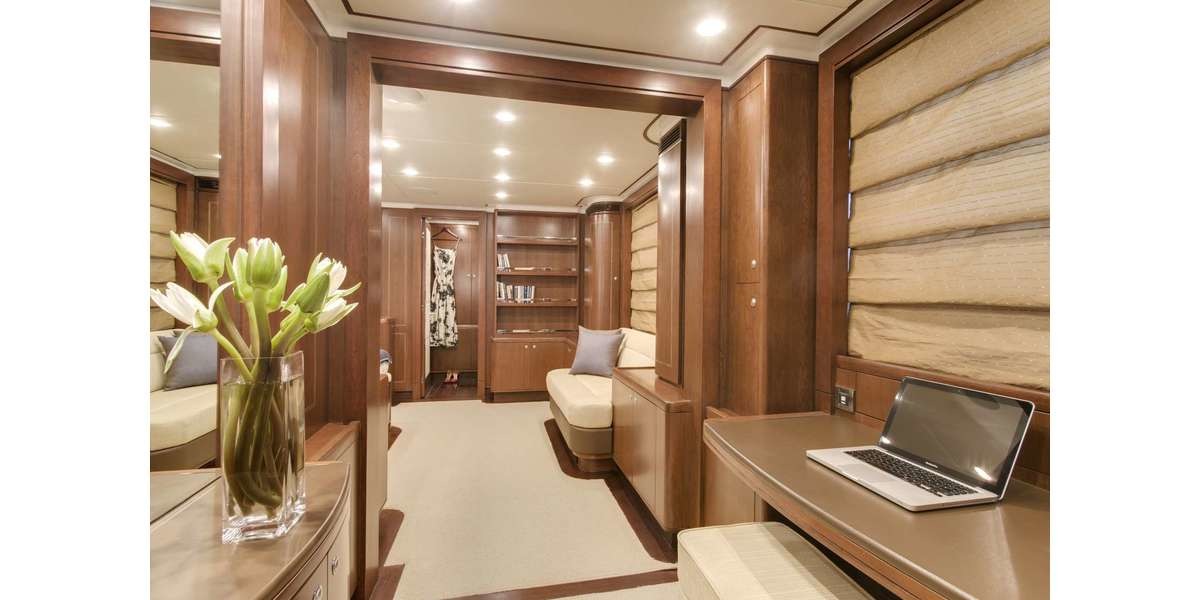 She is an elegant superyacht with expedition capabilities, perfectly suited to the South Pacific environment. Nominated for superyacht of the year in the 30-40m category in 2009, her Dubois styling shines in every aspect of her design. She was built in 2009 and had an amazing refit in 2017 that made her modern and beautiful.

This charter yacht with an Australian and South Pacific focus, provides experiences to the highest international level with the added bonus of unbeatable local knowledge.

Her expansive deck space, sleek lines and great layout make her an elegant and functional choice. She is seaworthy enough to comfortably cruise long passages, compact enough to take guests right up close to all the hidden wonders of the pacific and spacious enough to give each guest their own slice of paradise.

Shayne is a classically trained chef in French cuisine, based in Sydney. Working at numerous high-profile restaurants and catering companies since the late 1980's and managing many kitchens around Sydney, he moved to Europe to expand his skills and his knowledge. Shayne was Head Chef of a number of restaurants in the UK and then moved to the French Alps, working as Head Chef of an exclusive chalet. After returning to Australia, he started working on Superyachts where he has continued for the past 10 or more years.
Shayne has a broad knowledge in French, Italian, Spanish, Modern Australian, and Asian cuisine.

Dimity grew up in Sydney, moving to Perth in 1998 where she was based during her yachting career. She finally chose to return home to Sydney at the end of 2018, and joins this yacht in 2019.

She joined yachting in 2005 after a career in Travel and Hospitality, and it was a natural progression combining her love for the ocean, travel and hospitality skills. Dimity enjoys the diversity of life onboard, seeing the world from a different perspective, meeting people from all walks of life and seeing owners and their guests enjoy unique experiences.

Her beautiful enthusiasm is a joy for guests to be around, although she is also discreet when required.
Dimity enjoys paddle boarding and body surfing, if possible in untouched surroundings. She loves running, hiking, exploring, travelling, and baking.

Our young and talented engineer, Sammy, was initially passionate about mechanics on four-wheel vehicles (MTU and Detroit training) before he discovered the intricacies on yachts. After a few different experiences in Sydney and on the East Coast of Australia, Sammy decided to expand his horizons and skills and joined a 72ft yacht in the Mediterranean. He then escalated and obtained his first Chief Engineer role on board a 137ft yacht in Mexico in 2017.

He has been involved in shipyard periods, commercial surveys, refits, and consulting projects for class and flag management.

Sammy’s background is Vietnamese. When not hiding in the engine room, he enjoys snowboarding, photography, fishing, and anything around cars and machines / HP Engines. The Gulf of California, Baja California Sur and Mexico are his favourite cruising areas: very remote untouched cruising destination, amazing marine life and most importantly the peace and serenity.

Bastien is our preferred PADI Dive Instructor for guests on the yacht in New Caledonia.
A doctor in marine biology, his experience in the underwater world of the lagoon is unrivalled.
Bastien has carried out several scientific studies particularly in the Southern part of the lagoon, working primarily around the reproduction zones for different species of fish, and geotagging familiars of larger animals like reef sharks in order to understand their genetic structure.
Studying in Paris, he then went on and relocated to Montreal then New-Zealand to pursue different degrees in biology and at the National Institute for Water and Atmosphere, before setting home in New Caledonia in 2006.
Bastien is also a talented underwater photographer and will capture these incredibly unique moments for you whilst on board.

Some of Bastien’s favourite sites in the South of the lagoon: closest to Noumea, the wreck at Amedee offers a great starting point, before adventuring towards Ilot Mato, and Ieroue. Towards the West, the islets of N’Da, Ua and Kouare have the perfect visibility conditions, as well as the most secret spots for mantarays and turtle populations. He is also fascinated by the Loyalty Islands Group, his daughter's middle name was in fact chosen after Ouvea!

Bastien is available on a daily rate basis, and can be accommodated in the crew quarters.
Equipment can be stored in the yacht's garage (short-term only) or on board the 34ft Boston.

As a Dive Instructor he is able to arrange PADI and also specialist certifications for Guests such as "Shark conservation", "Nitrox", or "Underwater photography".

A man of many skills and backgrounds: growing up in Sydney, Australia, Perry’s attraction to the superyacht industry after experience in the navy stemmed from a desire to serve discerning Owners and Charterers in different parts of the world. He joined this yacht in 2019, in Sydney where he lives with his wife.

Perry entered the Royal Australian Navy as a young man, and transitioned into a variety of roles thereafter (from sales to bank clerk, pathology courier to radio announcer). He dived into the nautical world via a curiosity for fishing, and has worked his way up the ladder since 1990. He has managed remote tug operations in the Pacific, responsible for projects and ensuring legislation compliance (SMS, IMO and Marpol, ISM, WHS, ISPS,…). Perry dropped into the yachting industry as a Master on various vessels operating between Sydney and the Great Barrier Reef. His most recent experience was as Captain for a private Australia family, managing their 46m superyacht among their fleet of 4 based in Sydney.

When not on duty, Perry plays golf and loves surfing: he was recently in West Timor catching the waves off Rote Island! One of his favourite parts of the world is Kastellorizo’s blue grotto in Greece, and he was also fond of cruising Turkey.

Sam hails from the Northern Beaches of Sydney and has been a crew member of this beautiful yacht since early 2019. Superyachting allows him to apply his maritime knowledge and experience while travelling to remote and exotic locations.

His time on the water has been spent predominantly near Sydney Harbour as well as deliveries along Australia's spectacular eastern coastline. On a clear, crisp, winter's morning Sam can be found out past the heads at the helm, observing the annual migration of humpback whales from Antarctica to the Coral Sea. When not on the water he enjoys motorbike riding, cooking, cycling, and reading.