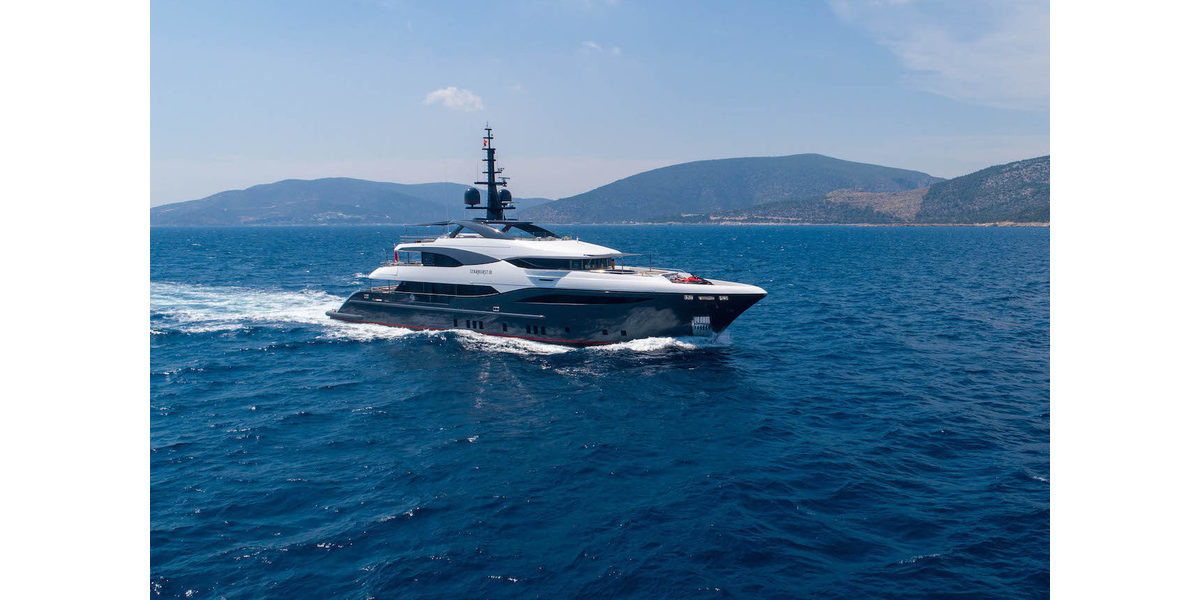 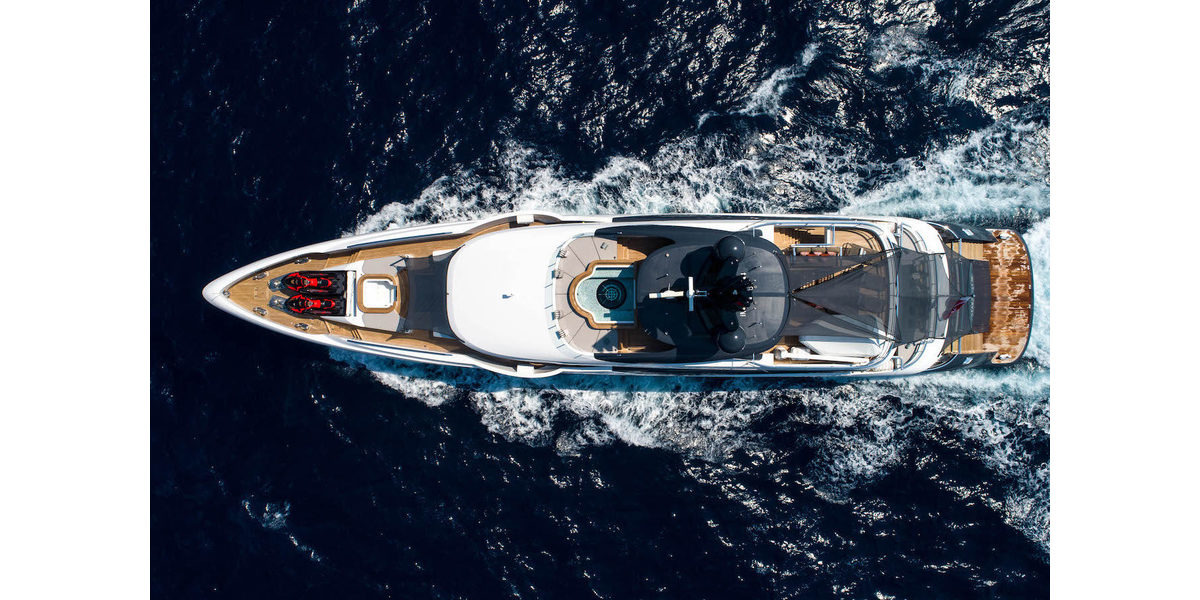 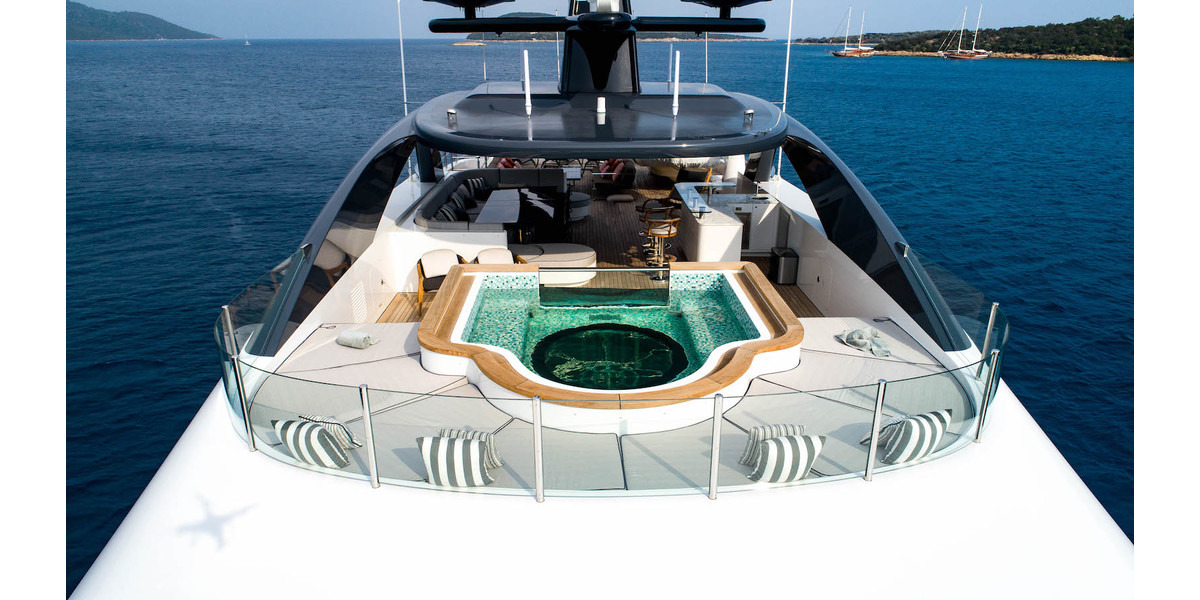 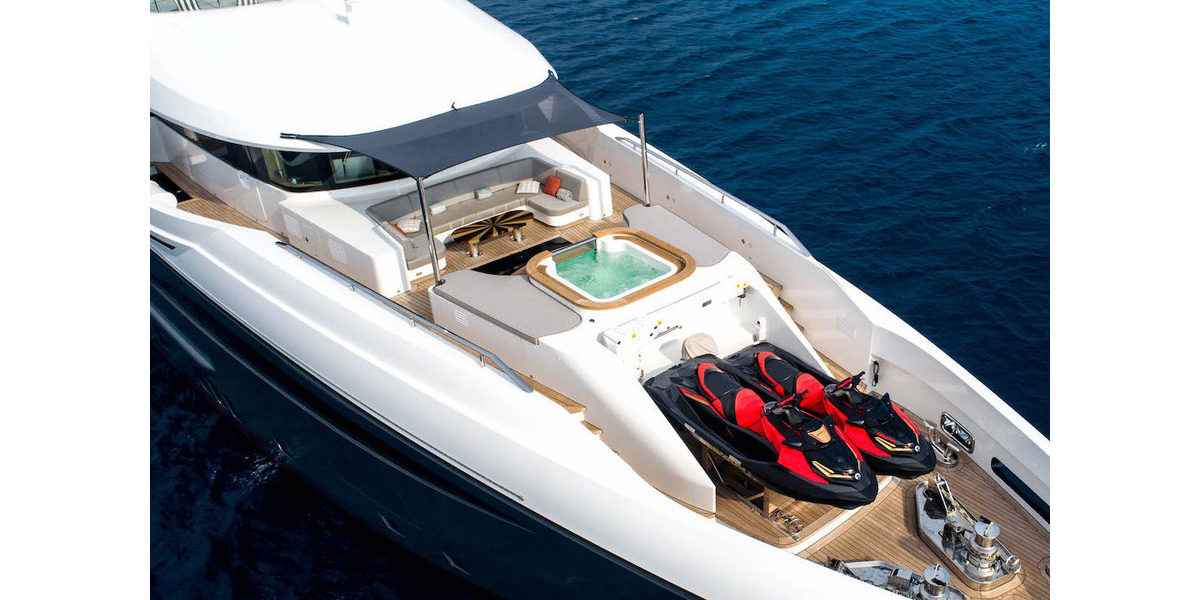 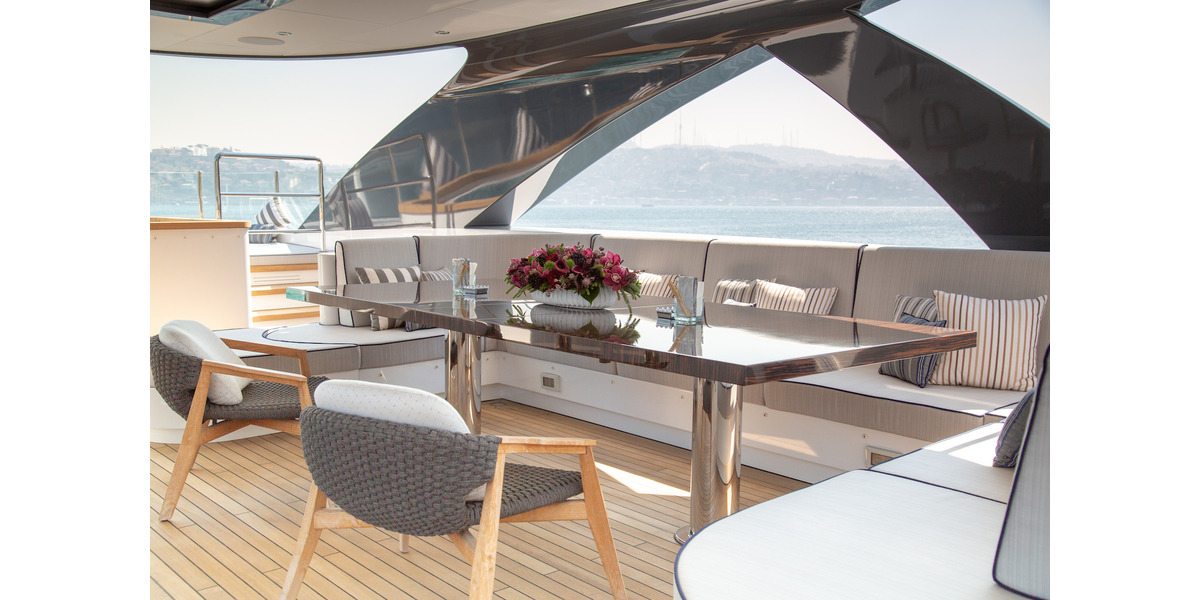 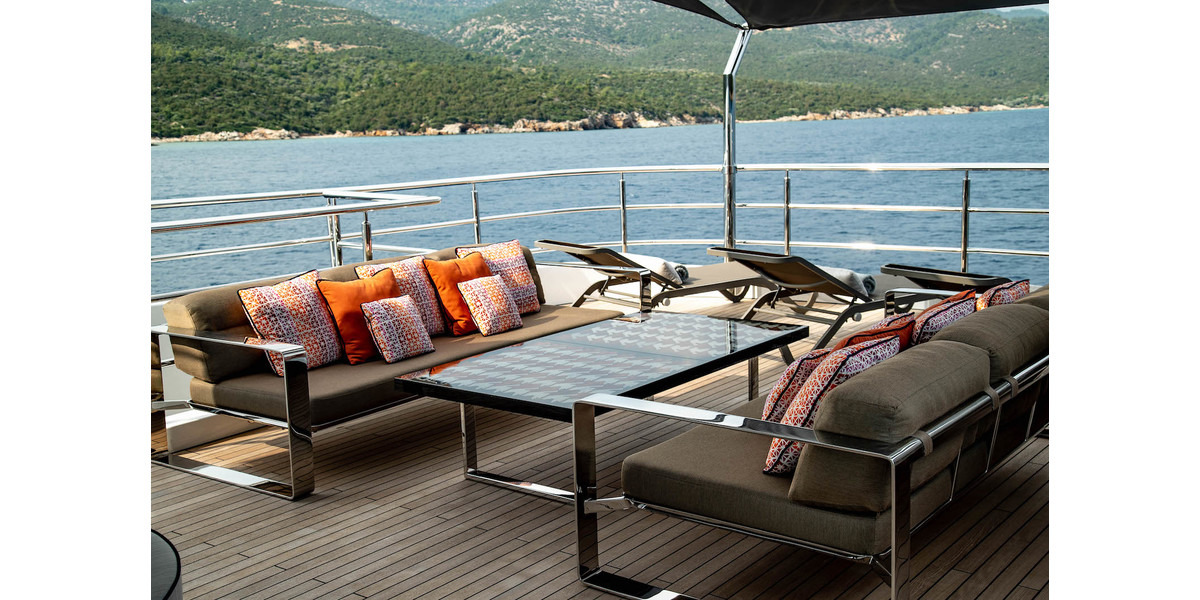 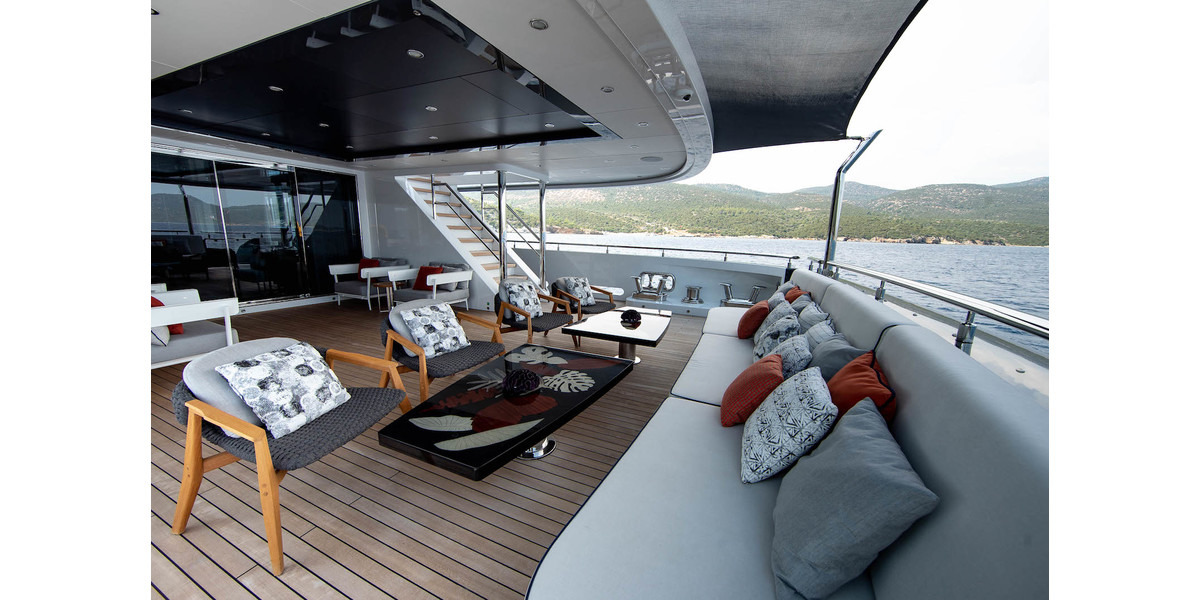 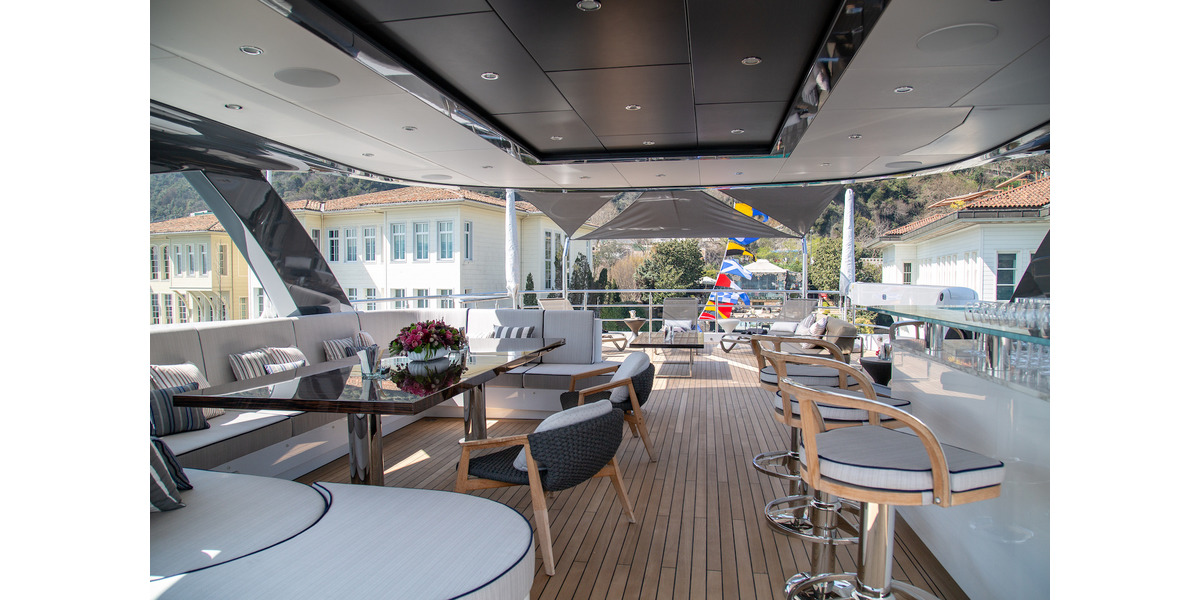 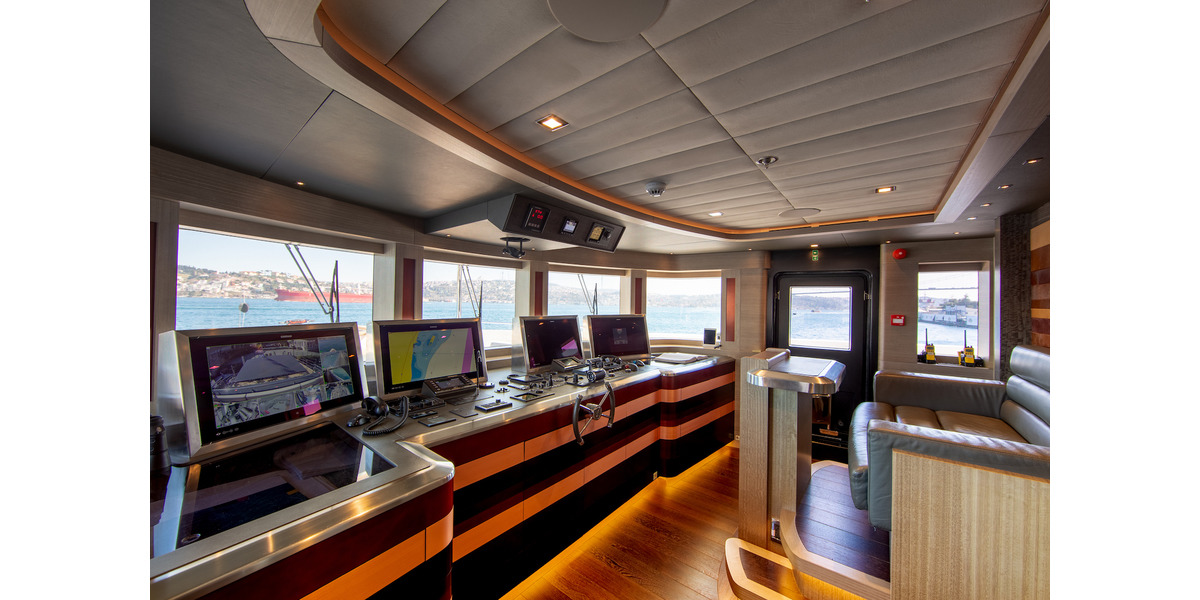 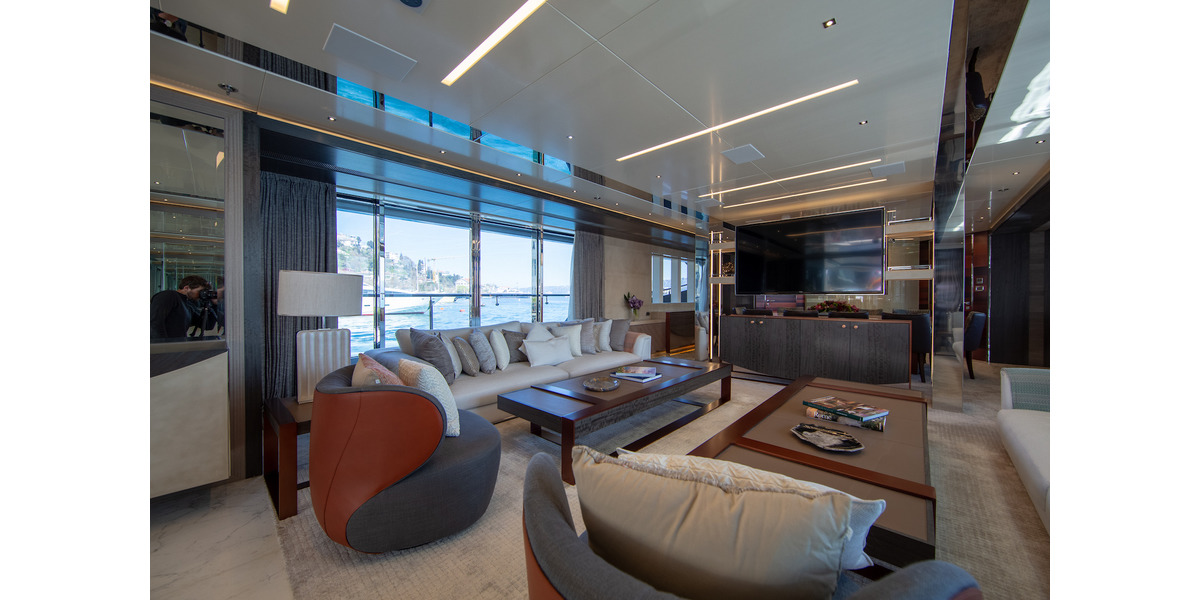 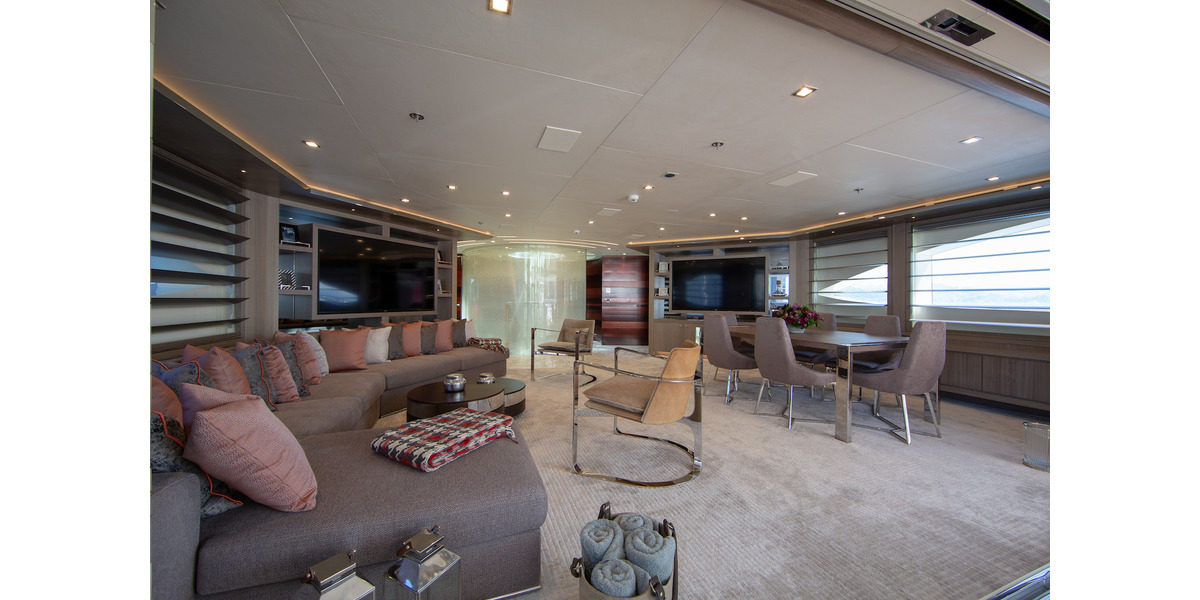 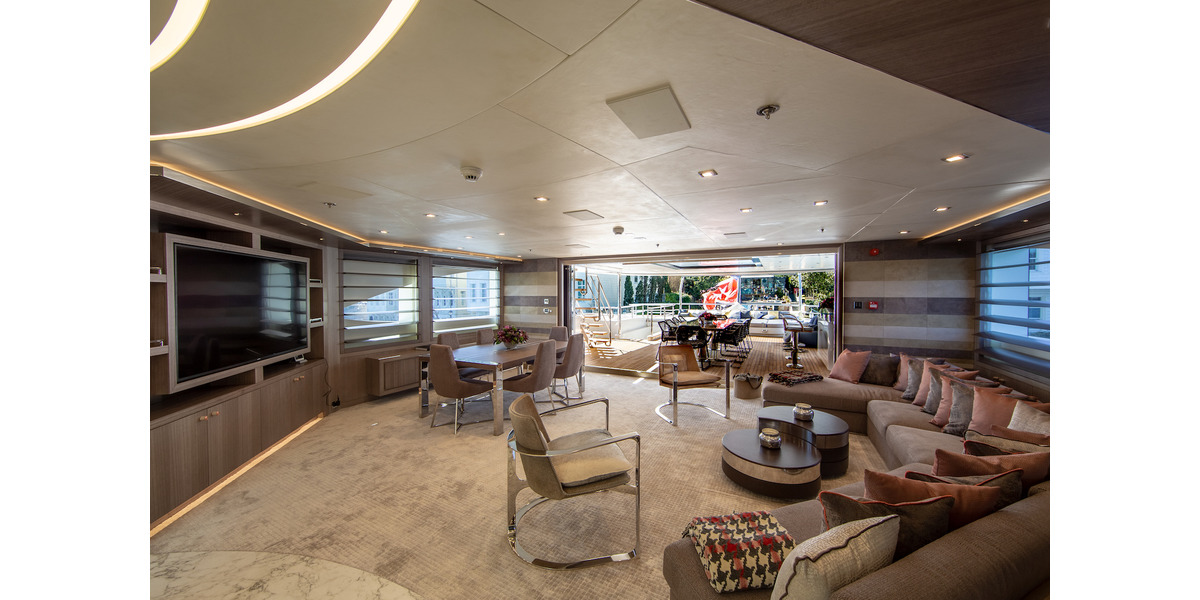 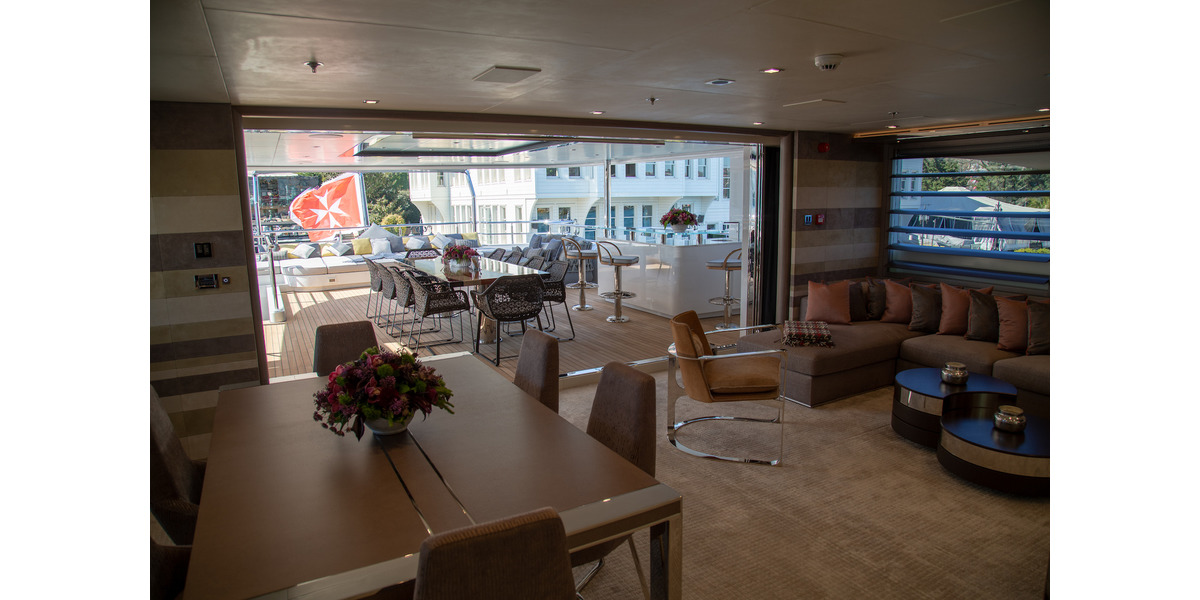 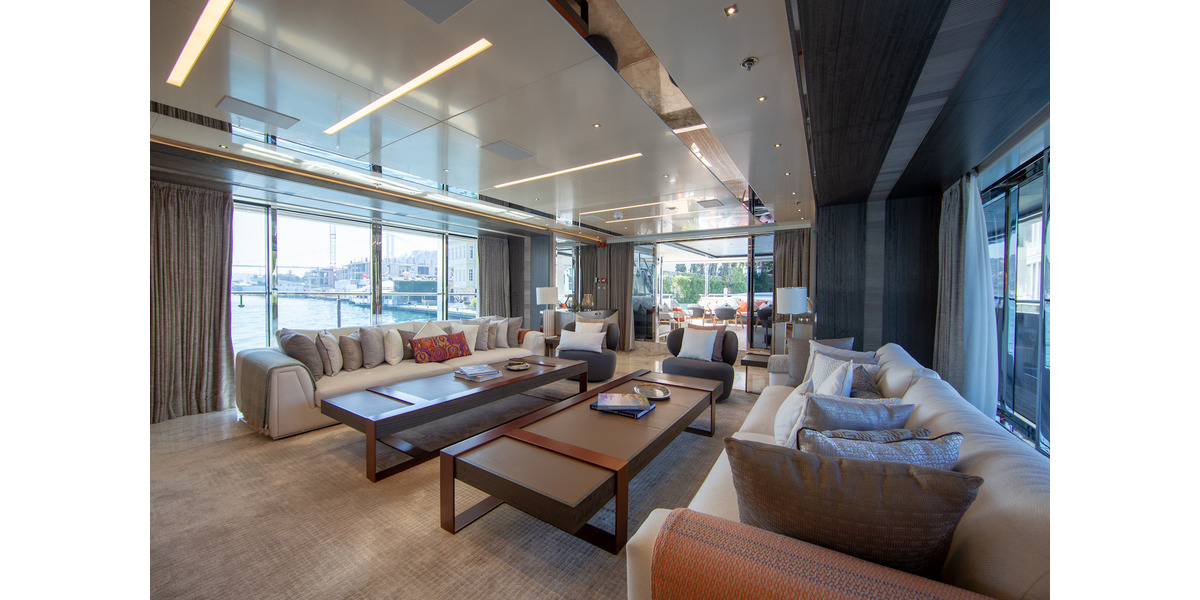 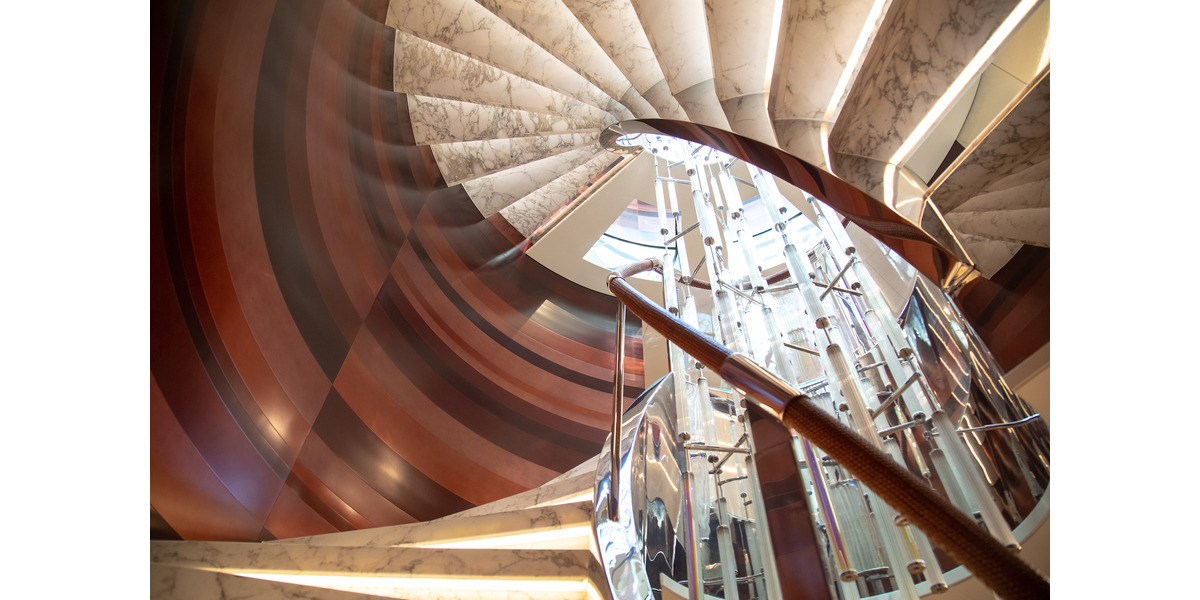 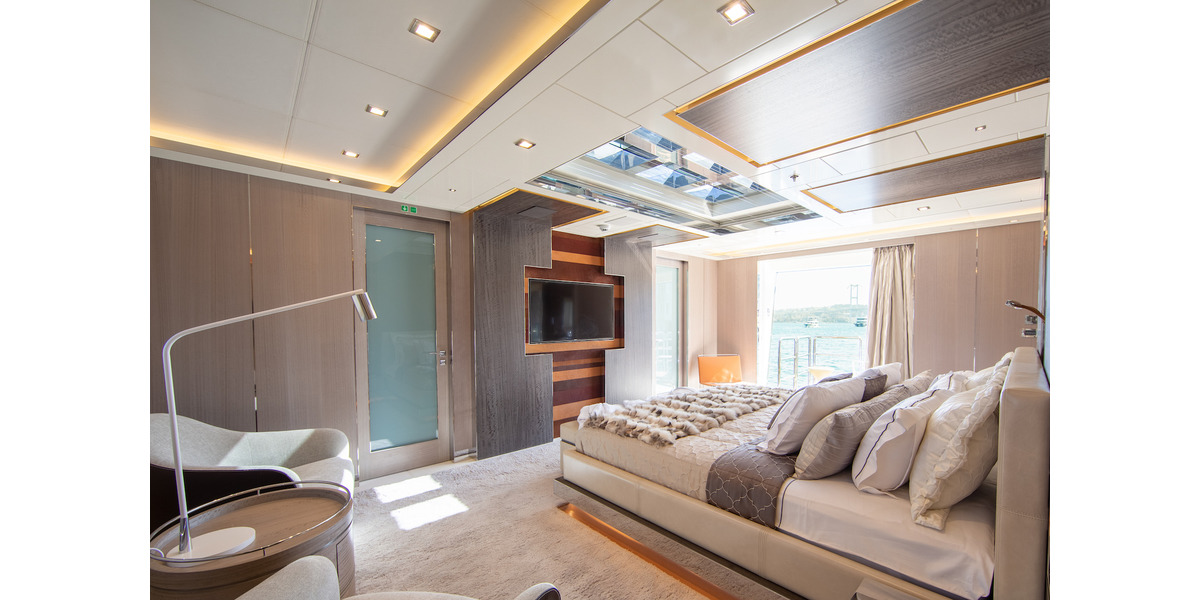 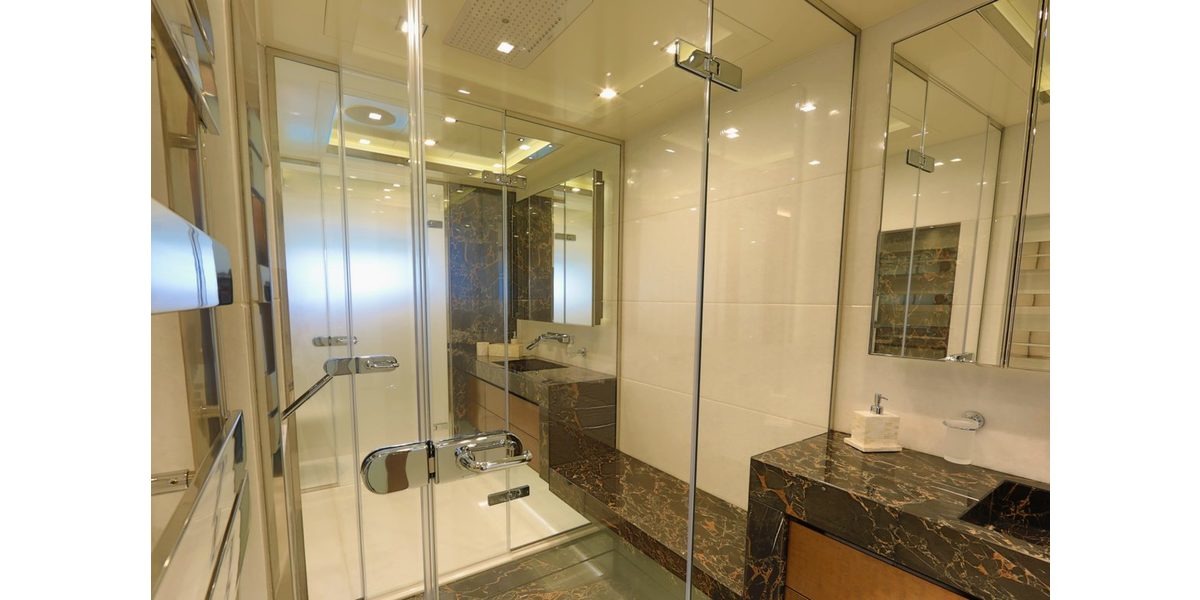 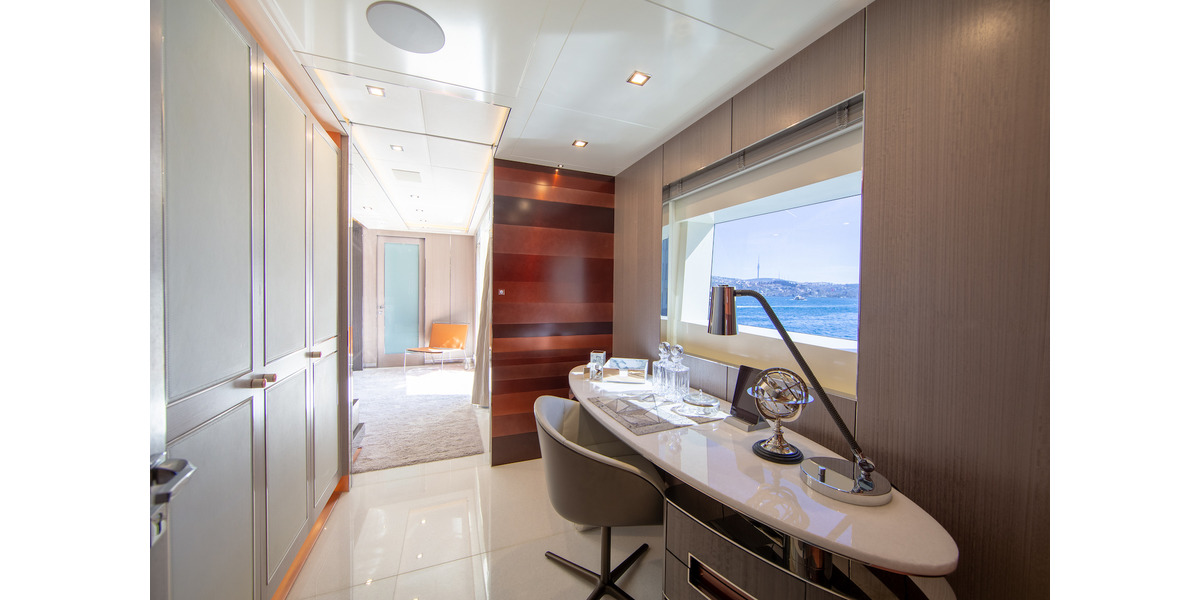 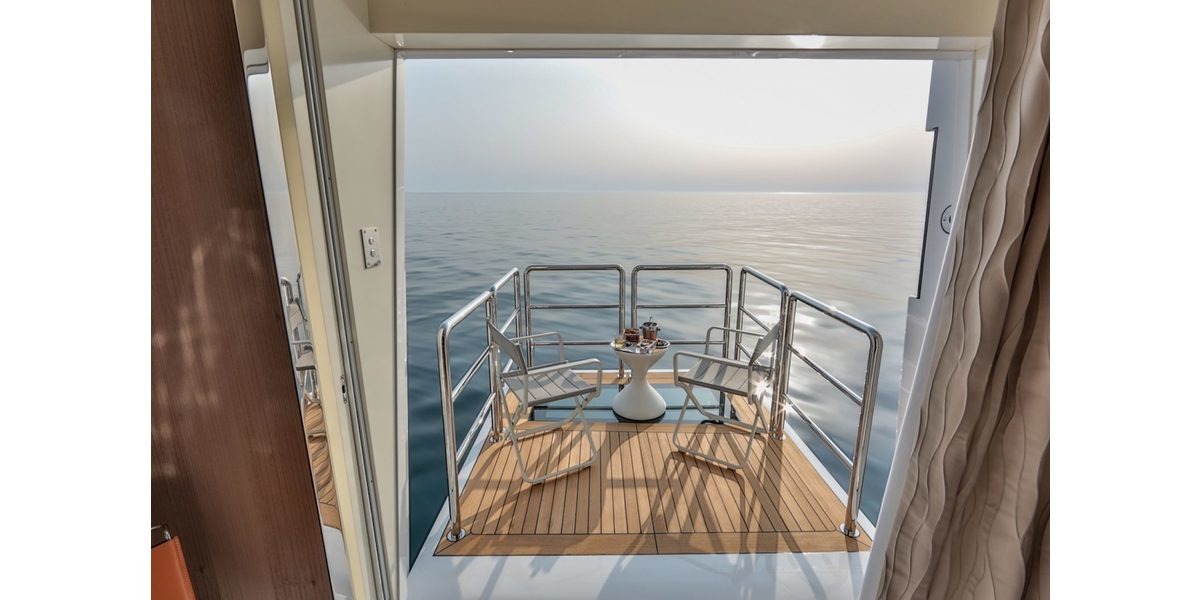 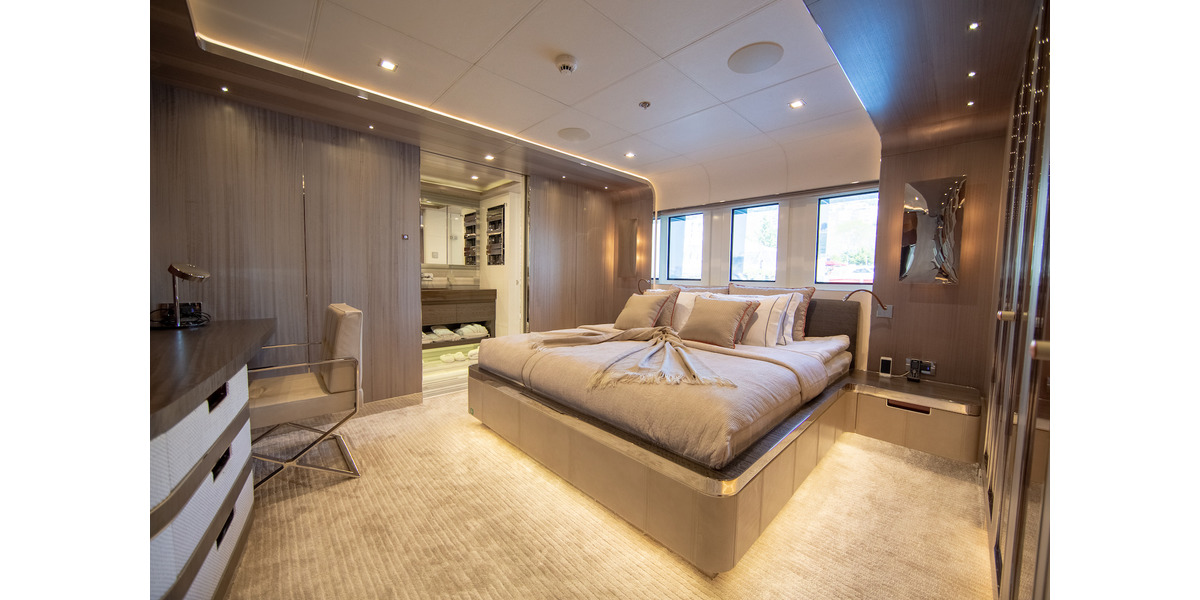 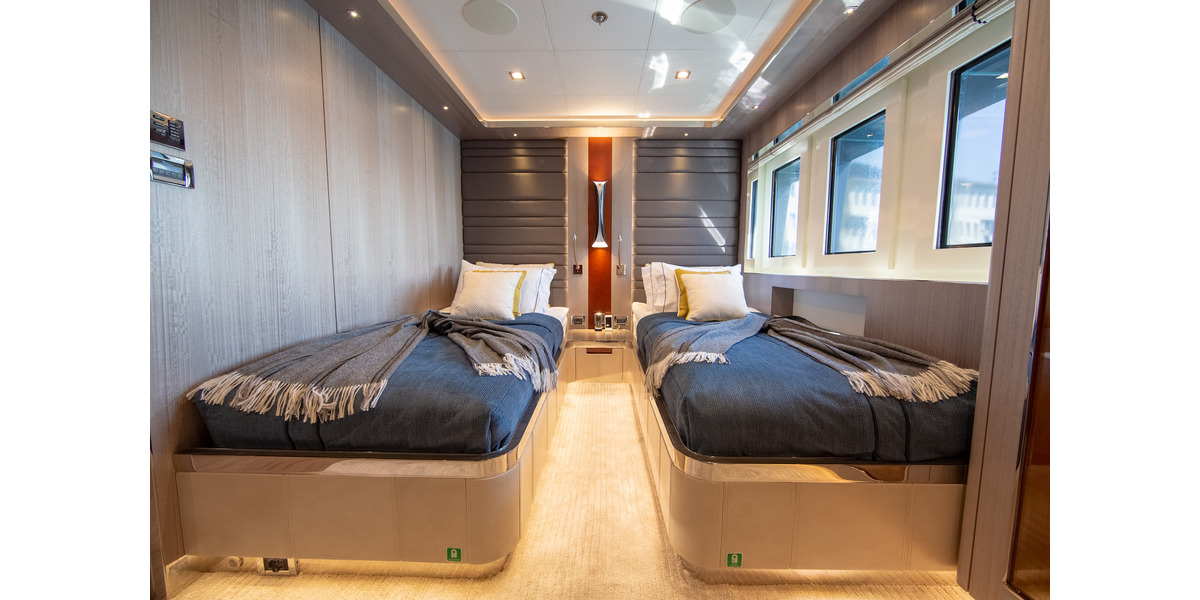 This beautiful and modern custom built charter yacht was built by Bilgin Yachts and was recently refitted in 2019. She offers accommodation for up to 10 guests in five beautifully designed staterooms including four cabins located on the lower deck and the master cabin with its own private balcony, office and en-suite bathroom on the main deck. This superyacht offers plenty of sunbathing and shaded relaxing areas for the guests across the upper deck, the foredeck and the bridge deck. The main deck features a large alfresco dining area with seating for all guests and a large sunbathing area.  The bridge deck and the foredeck boast a Jacuzzi with a sofa area. This superyacht offers a large selection of water toys including a 5.5m jet tender, two Seadoo jetskis, two seabob F5s, kayak, wakerboard, waterskis, three paddleboards, inflatable water toys, snorkelling and fishing equipment. A crew of 9 members ensure the utmost luxury experience aboard this superyacht.

Sebastian started sailing at young age and his passion for boats and ships became a profession years later. Having sailed all over the world including South Pacific, Amazon River and both polar regions he could fully combine his love for nature and exploring with the enjoyment of sailing the oceans. Years later he joined large yachts but never put his dream aside of returning to the polar regions on a yacht one day. Sebastian is also a water sports enthusiast, enjoys windsurfing and diving, but also loves to relax in his garden back home near Hamburg.

Morgan grew up on the Island of St Maarten in the Caribbean. He has loved the ocean and from an early age and through the enjoyment of weekends spent cruising the Caribbean islands, became well versed in watersports and is a skilful hand on powerboats. Morgan also has a 10-year hospitality background working in high end restaurants and thus understands the importance of excellence in service. Having joined the yachting industry in 2009, he has obtained his Chief Mate 3000gt whilst cruising the Mediterranean, Caribbean, North and Central America. Morgan loves the outdoors and in his free time he enjoys cruising the oceans on his sailing yacht now based in Panama.With his expertise in all water activities, Morgan will ensure you spend some memorable times onboard and will ensure your safety at all times.

Ioannis is Greek although grew up in London forthe early part of his childhood. He is classically trained in French and Mediterranean cuisine, having studied at Le Monde Hotelier School (Athens), a scholarship to the Institute Paul Bocuse (Lyon), the London Academy and Ecole Hotelier (Lausanne). He has gained valuable experience working in a number of high-end restaurants and luxury villas in Greece, France, Switzerland and London (including at the official residence for the Lord Mayor of London). He has a wide repertoire with a more modern and light approach to his cooking. He is a hard-working and positive character who is a great asset to the team!

Robin was born in East London. He spent most of his early weekends on the East coast of England, where he started to sail small dinghies at 7 years old. He progressed up through the sizes & classes, until being involved with a Whitbread sailing campaign in the mid 90’s & the Americas Cup 150th Jubilee event at Cowes, UK in 2001. He studied the sciences at Highschool, before off to College & University, for various engineering qualifications, gaining his Y1 Chief Engineers license in 2009. He very much enjoys Scuba diving & you might see him jumping off the yacht to check the underside of the hull & propellers, when he is actually just sitting on the anchor, watching the fish swim by. Another passion is hacking at golf balls & shouting at the referee on TV, when England is playing whomever at rugby. He is a firm believer, that Christmas music can be played in July, with the geniuses that are Cash, Elvis & Buffet played loud all day & every day.

Josko completed the Maritime College and Maritime University in Split Croatia with a BS diploma in Ship Engineering. After having spent 9 years in the Commercial Shipping Industry, Josko joined the super yacht industry, where he has spent the last 12 years. During his career he has been Chief Engineer on board super yachts from 36m to 162m with a wide range of propulsions. As a professional he can describe himself with modified JFK moto “I never ask what the ship can do for me, but I always ask what I can do for the ship”! When on the other side of the passerelle, he likes to visit Museums, Churches, Theatres, interact with new people, expand his horizons and culinary experiences. Most people think that life is too short, but he believes that in fact, the majority of us only start to live their lives too late.

Ercan was born in İstanbul and grew up in Bosphorus. He was 16 years old when he decided to become a sailor, following in his father & brother`s footsteps, inspiring him to join the Nautical College in İstanbul. He started to build his career as a Radio Officer in the commercial navy in 2001. He has been in the yachting world for over 10 years and within these years he has travelled around the world many times with both charter & private boats. He is interested in all forms of technology and enjoys diving and taking photos.

Jie grew up in England with a passion for the outdoors, especially the sea. Having gone to university to study archaeology and anthropology, she realised that a life of arguing with academics was not for her so travelled and worked around Europe for a few years, specifically farming. In 2017 she stepped on a tall ship and never looked back. With a background in tall ships and sailing yachts, she just loves to be on the water and exploring and is currently working on gaining more sailing qualifications.

Dorota was born and brought up in Poland and studied Administration and National Security at University. She finished her studies with a master’s degree before starting a job as a manager in a furniture store. After 4 years working there, she decided to leave Poland and in September 2014 she joined her first yacht and has since then traveled the world including the Mediterranean, Persian Gulf, Indian Ocean & Caribbean. Dorota has a great eye for detail and her greatest pleasure is to see the smiles of the happy guests on board. In her spare time, she loves horse riding and her biggest passion – motorcycles.

Radina grew up in the seaside of Bulgaria. She started her career as a PA at the representative office of the Union of Comoros Flag Administration. She sailed for the first time in 2007 as a stewardess, meanwhile changing to river cruises on the Rhine, Danube, Seine and Rhône, before then moving to the yachting industry, where she has never looked back. At home she enjoys doing artistic gymnastics and many other sports.

Samantha began working in different areas of work from a young age which has allowed her to gain the necessary tools and skills to see her into her career as a stewardess. After completing her Bachelor of Social Science degree, Samantha left her home town of Cape Town to explore other parts of the world. During this time, she briefly worked in America for a winter season and then went on to teach English in Vietnam. With a strong desire to be in Europe, she joined the yachting industry and began her first season as a stewardess in 2019. Samantha is passionate about people, service and growth through interaction & experience. She is a new addition to the team and brings her warm, caring and hospitable personality to the team. Samantha is always happy to provide an assisting hand wherever needed and is excited to welcome you on board for an adventurous season ahead.