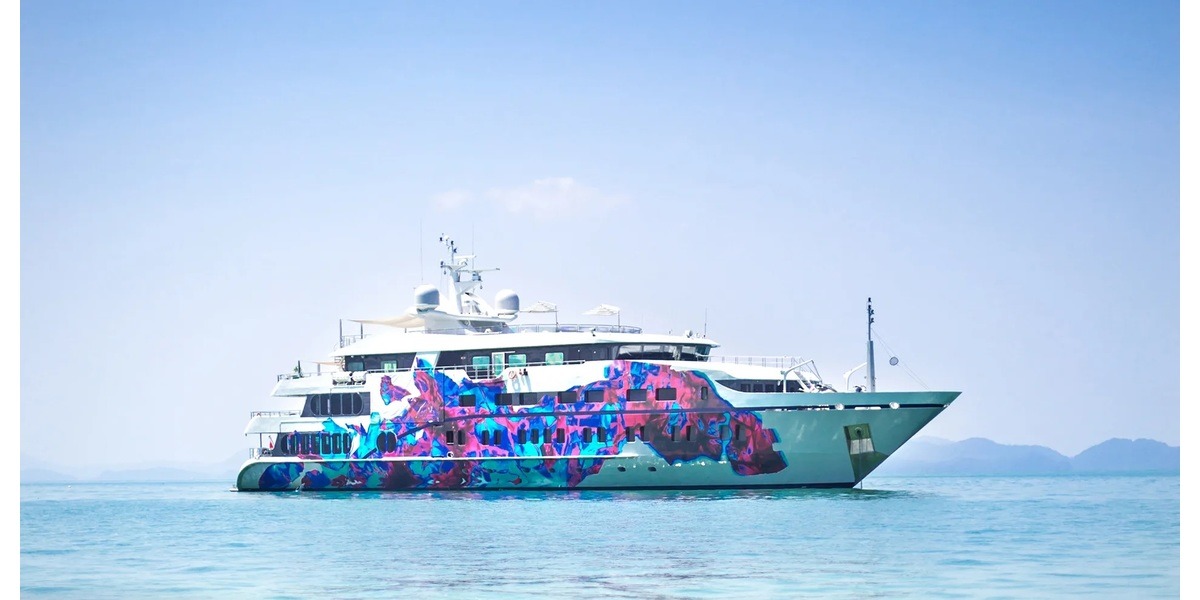 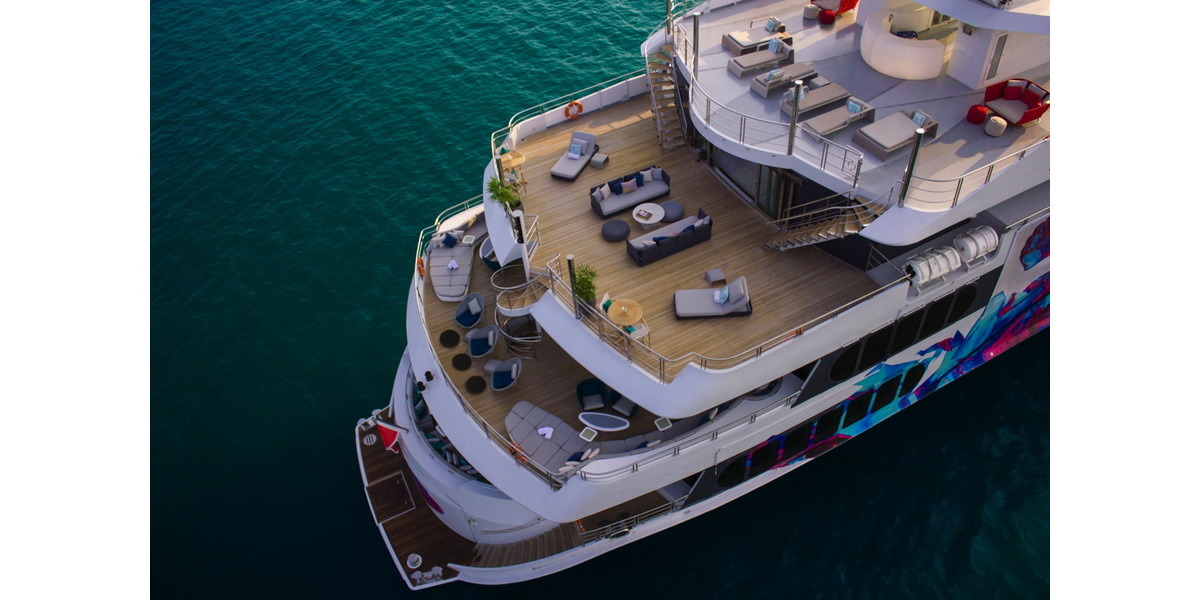 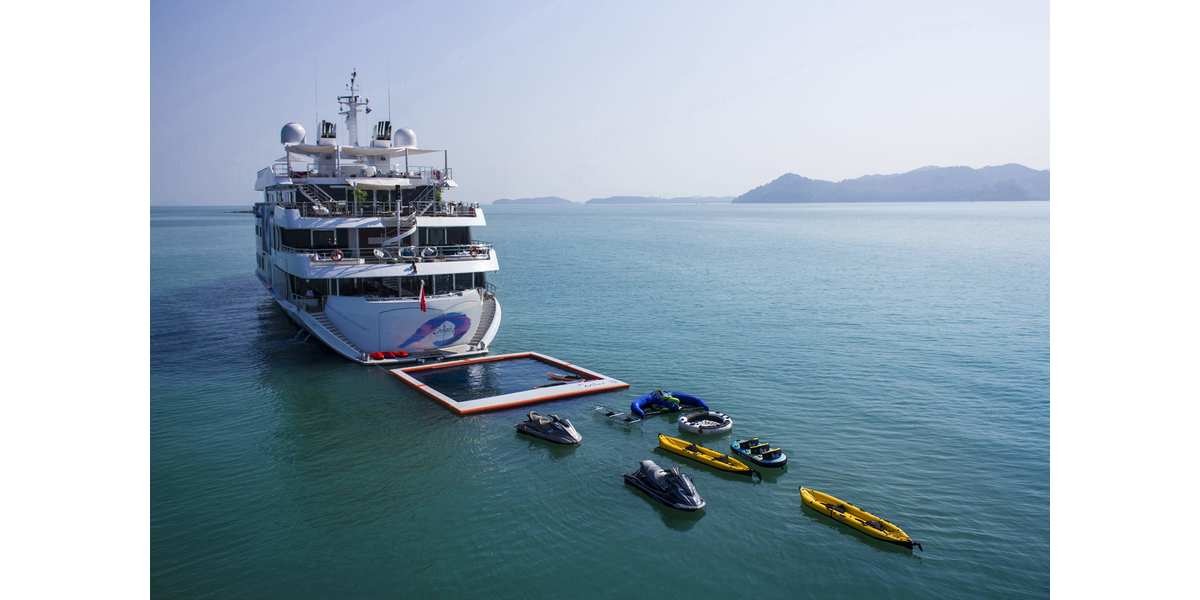 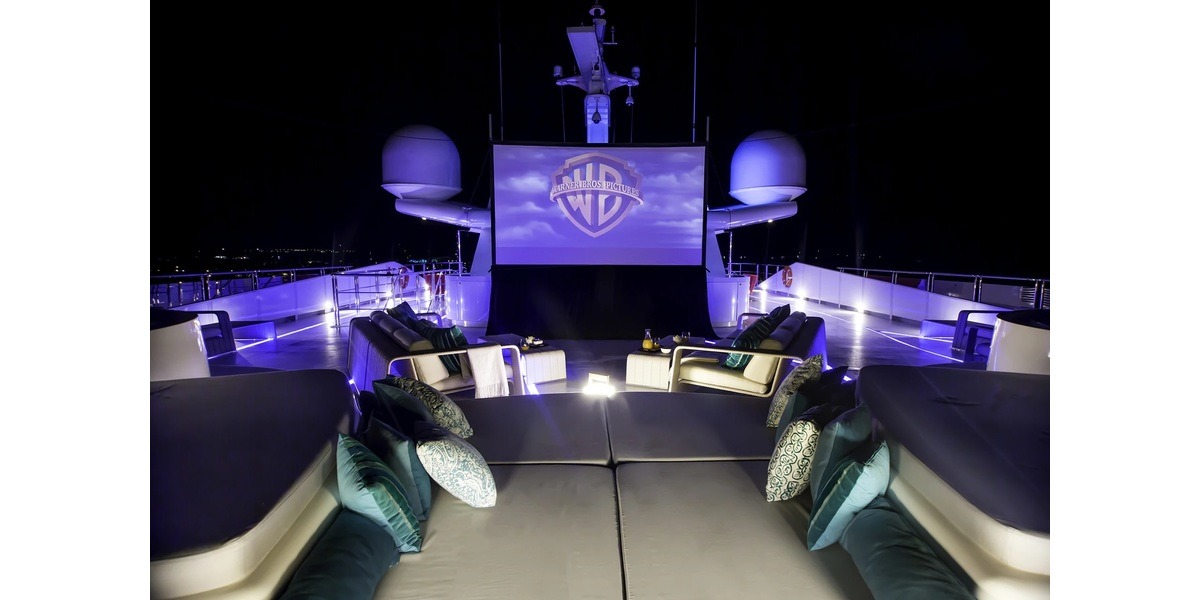 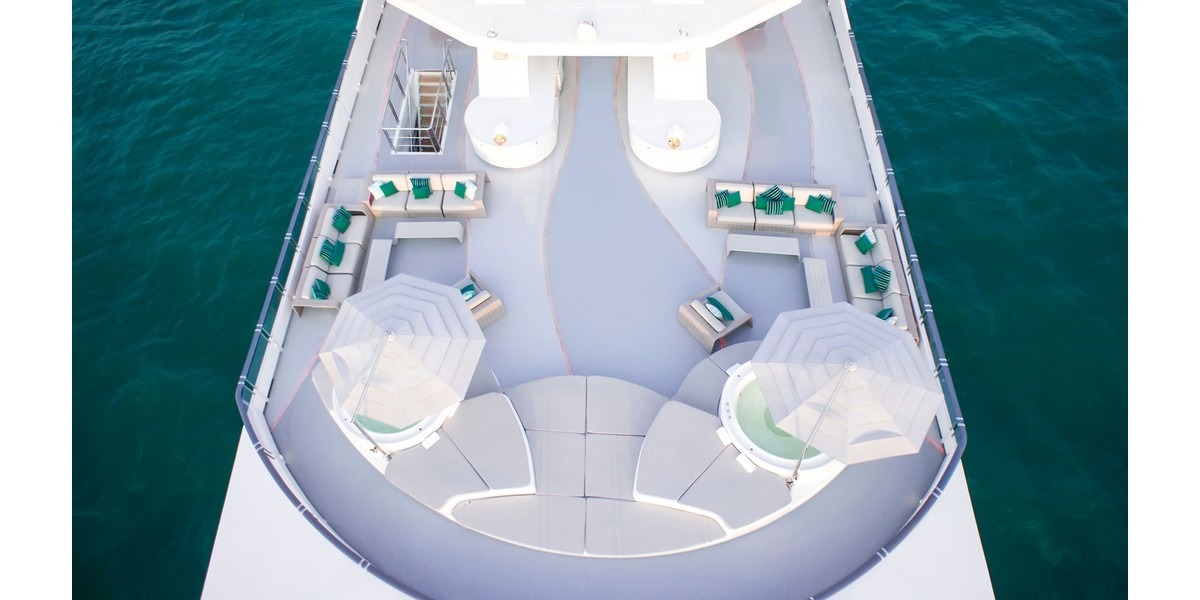 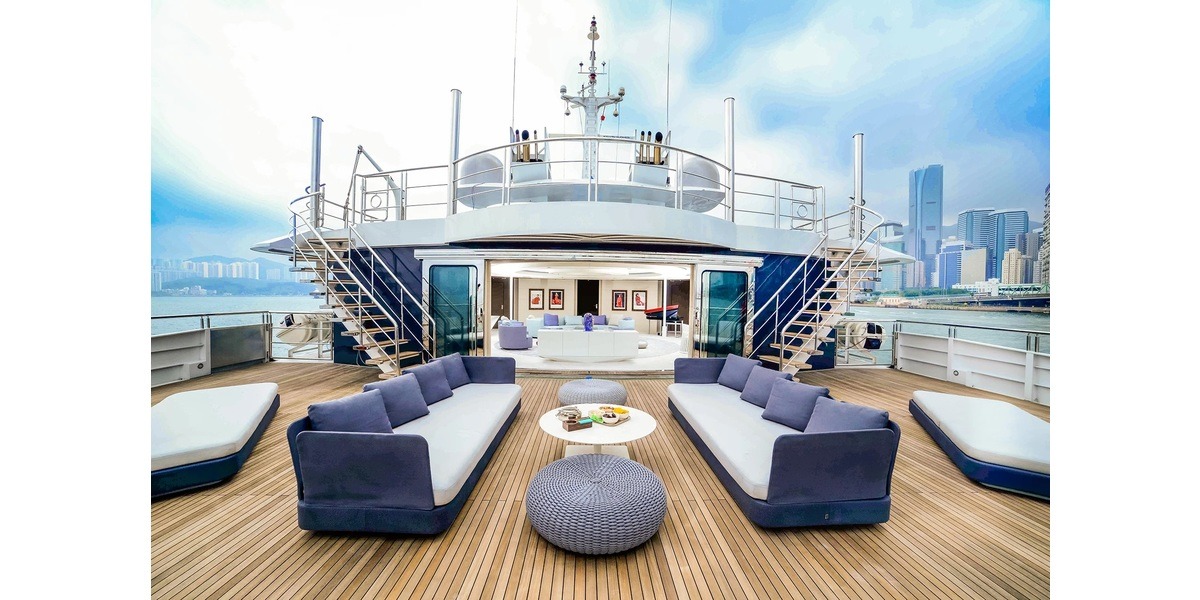 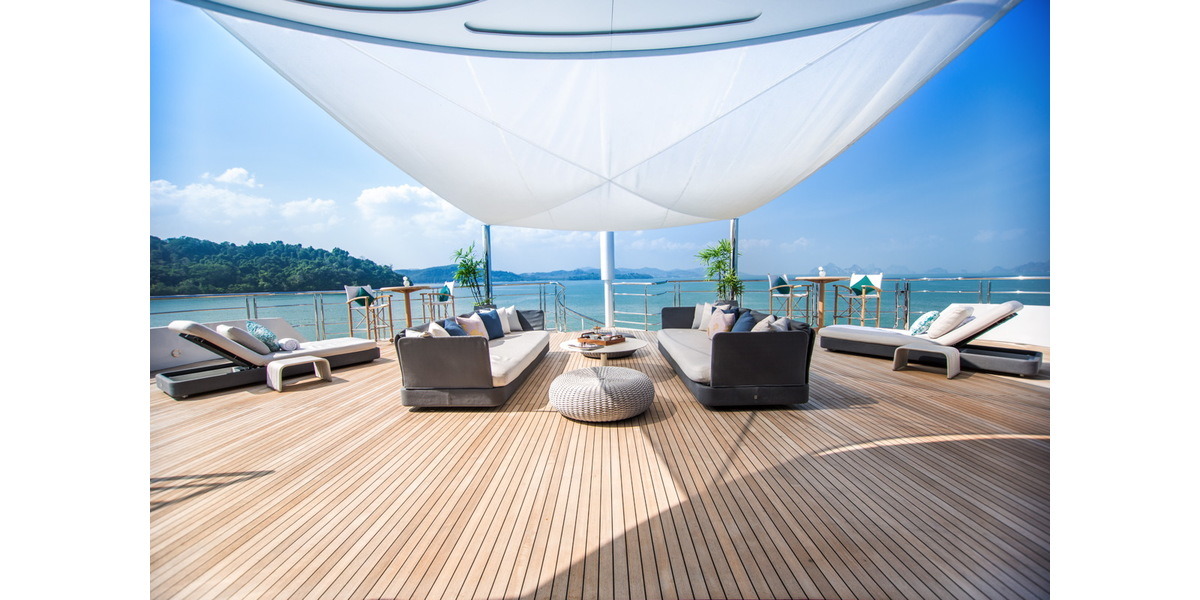 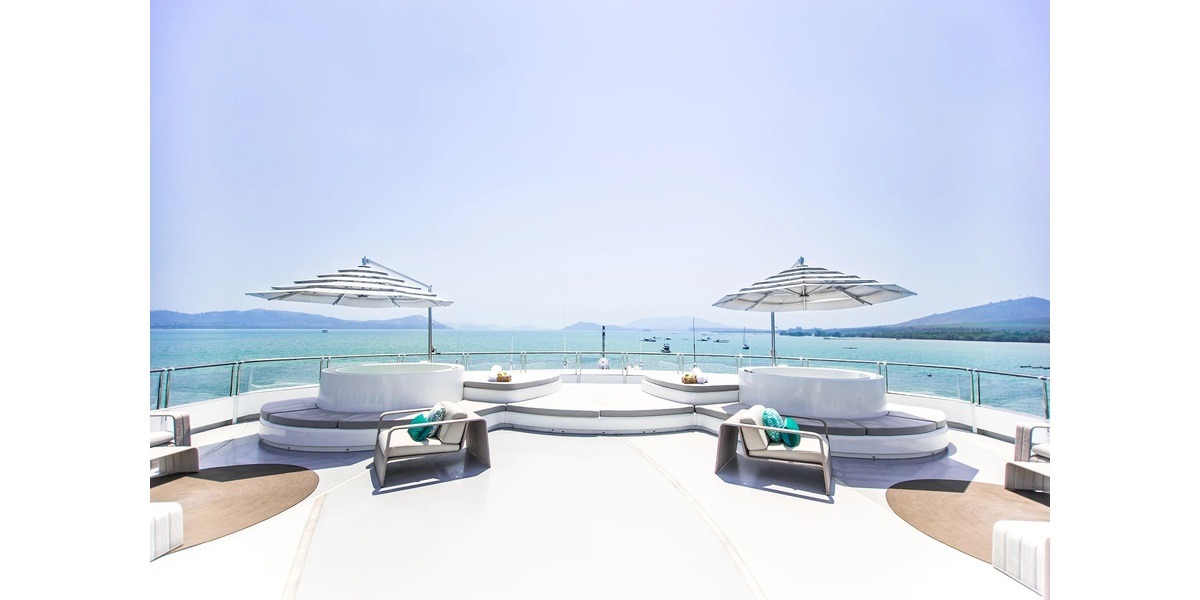 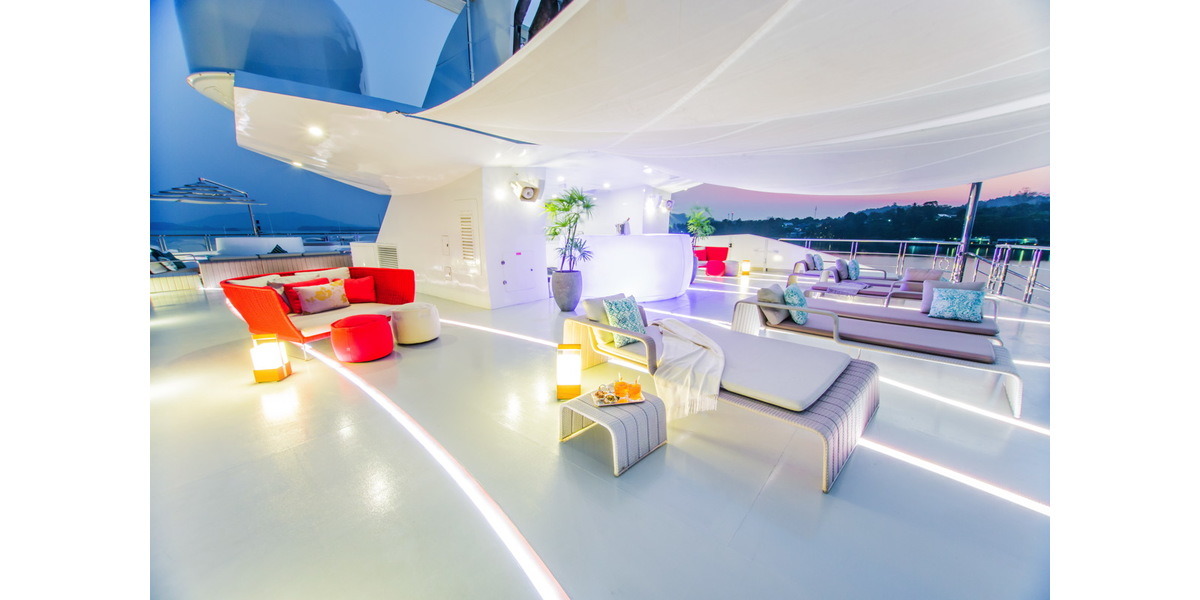 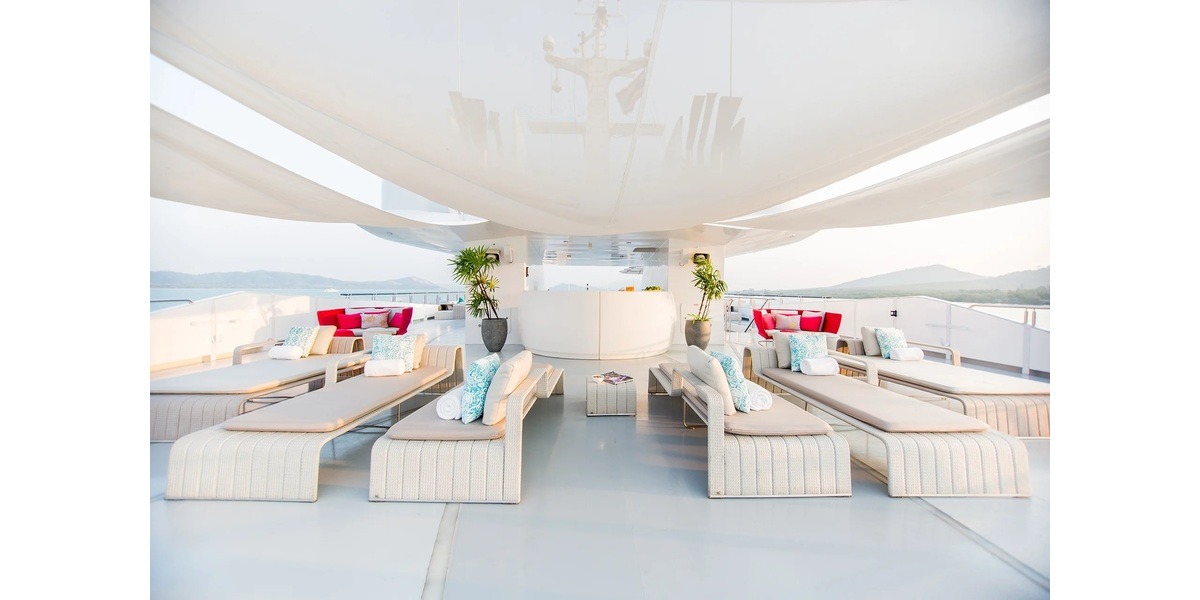 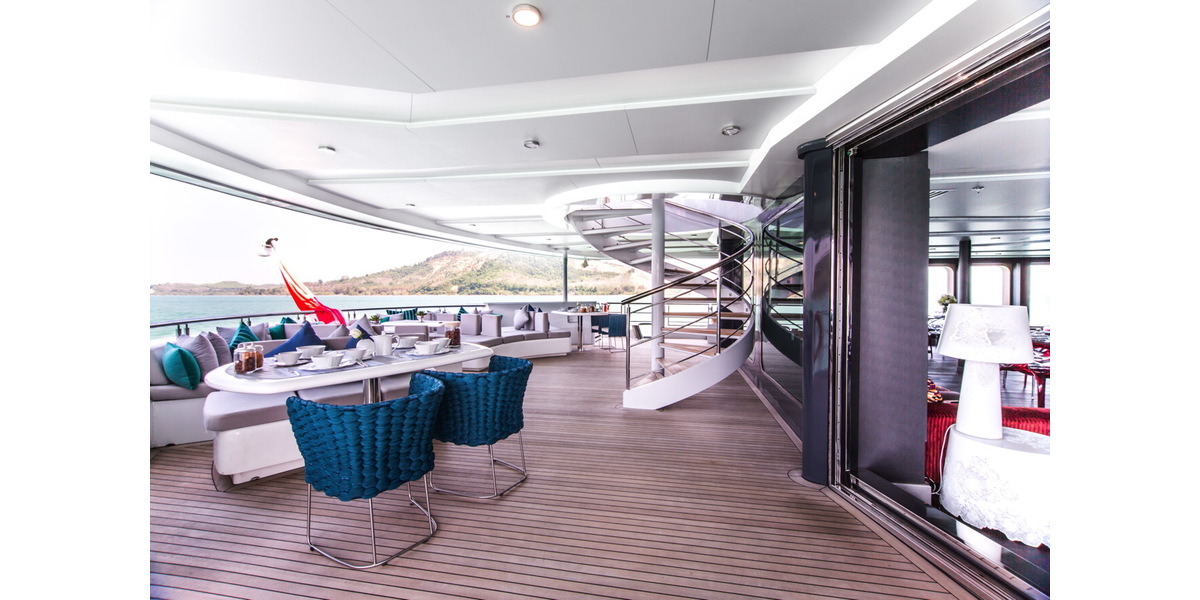 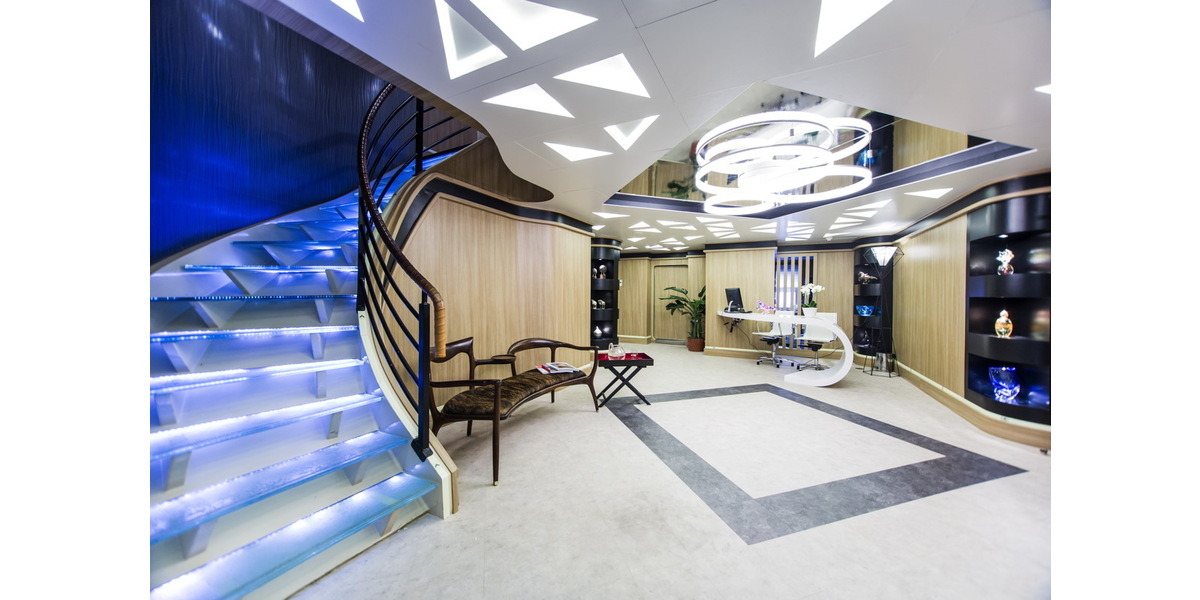 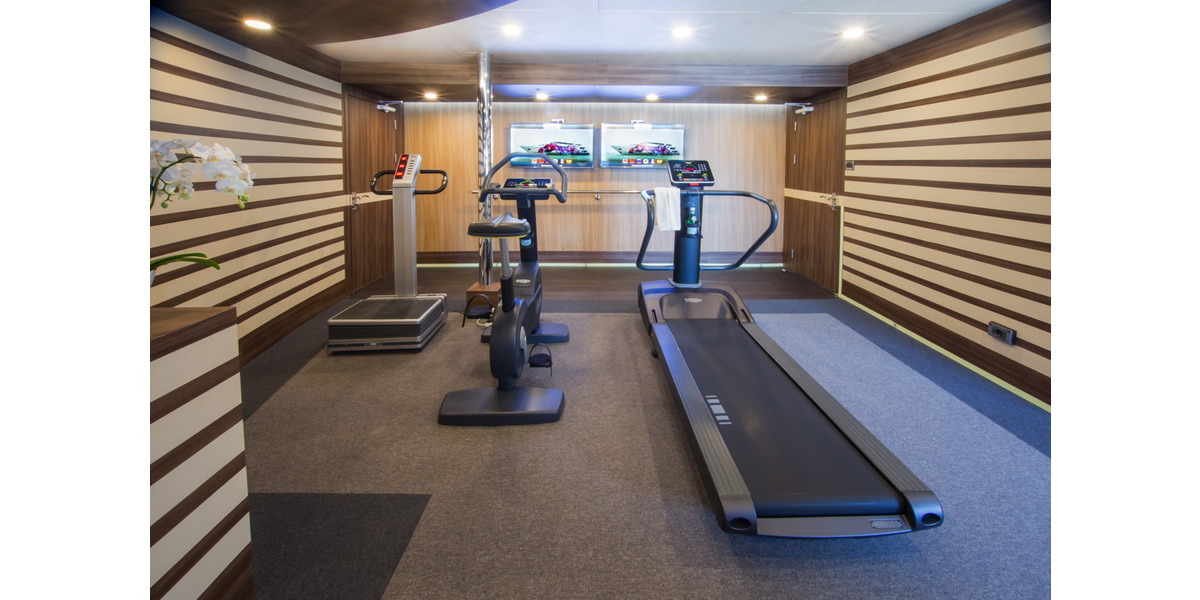 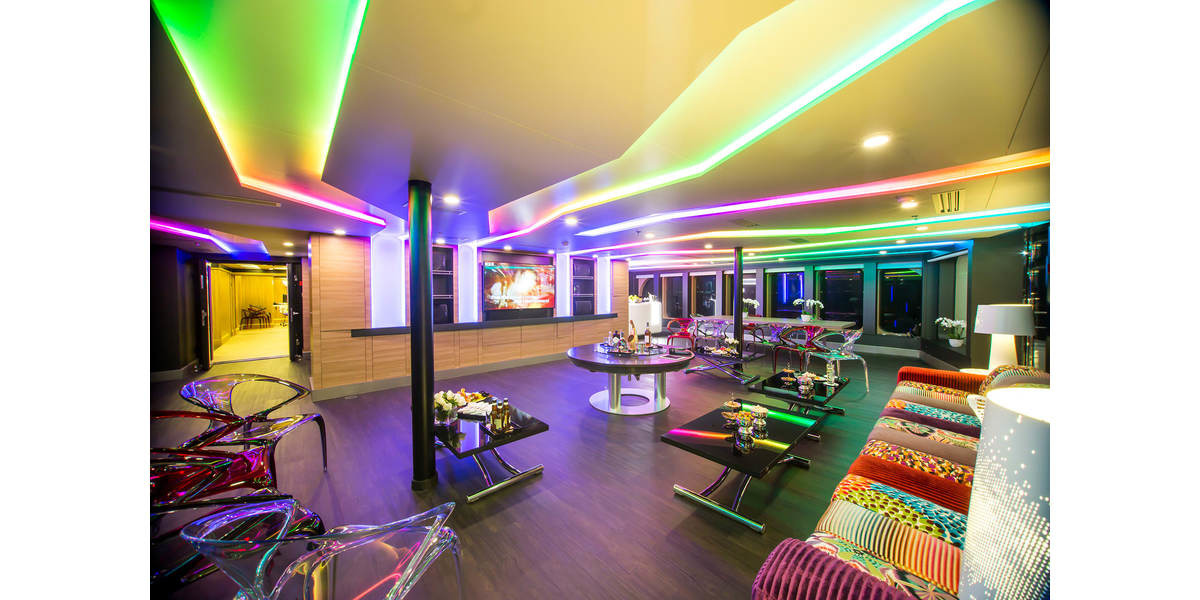 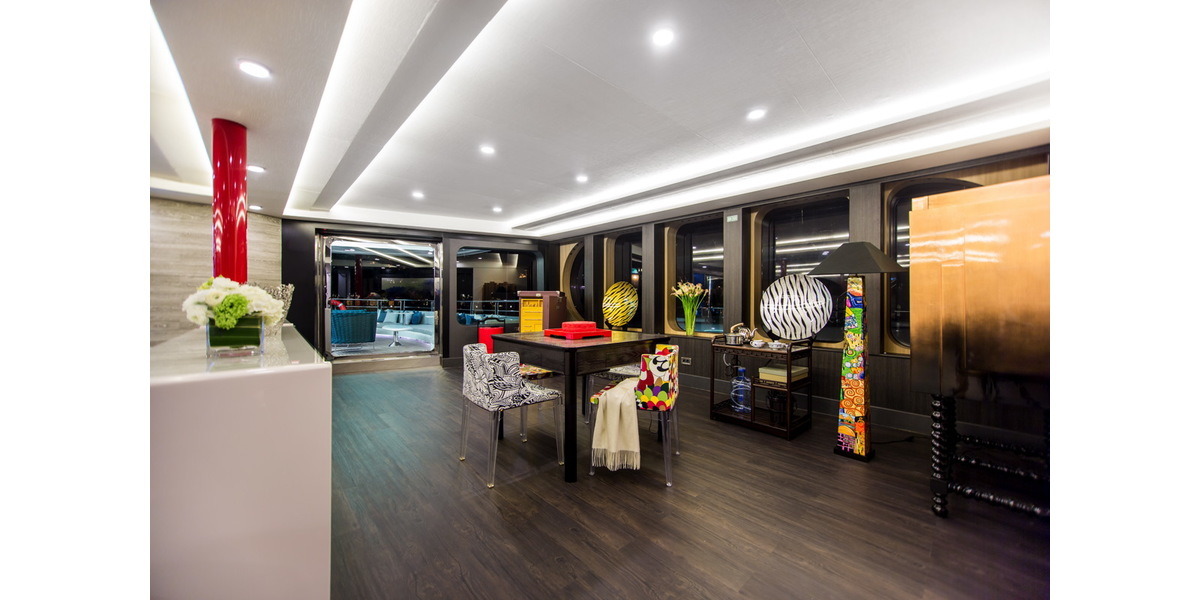 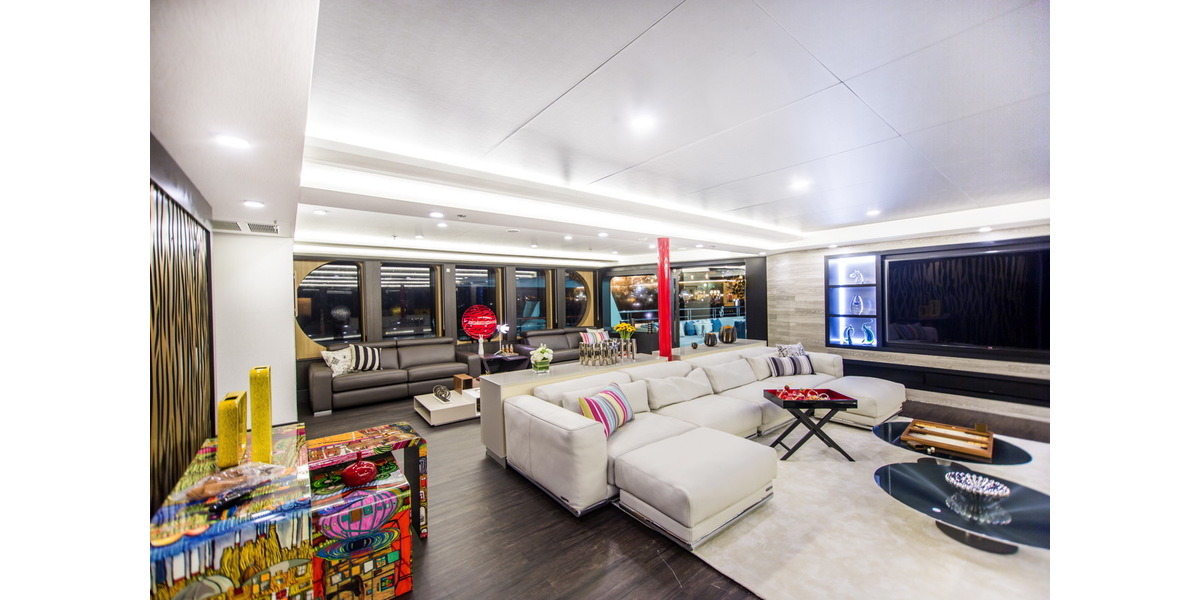 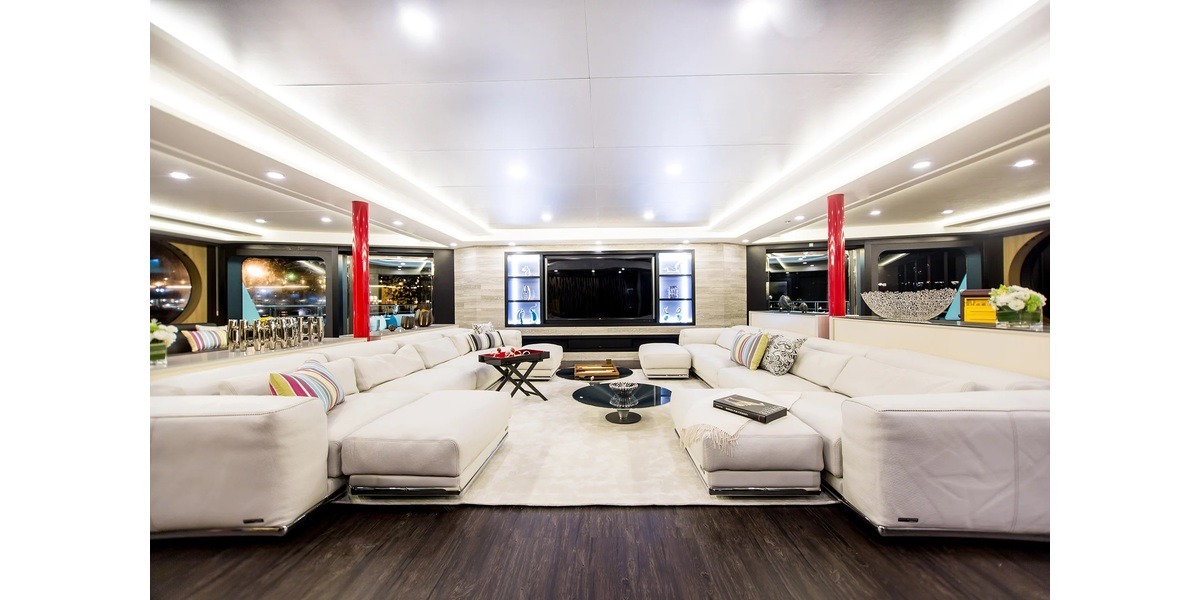 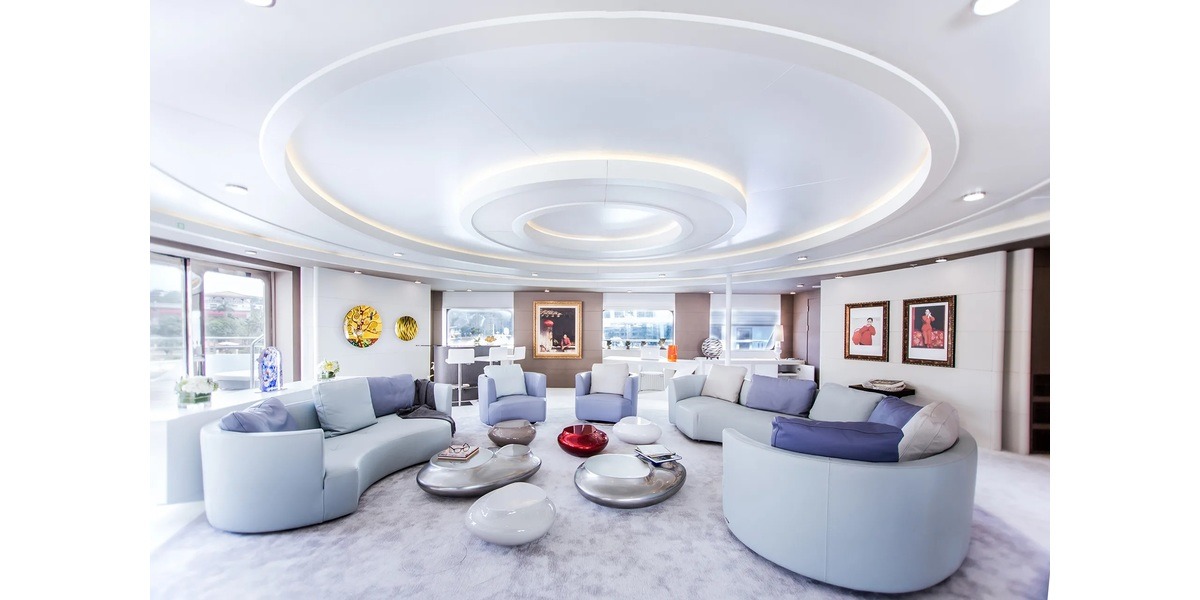 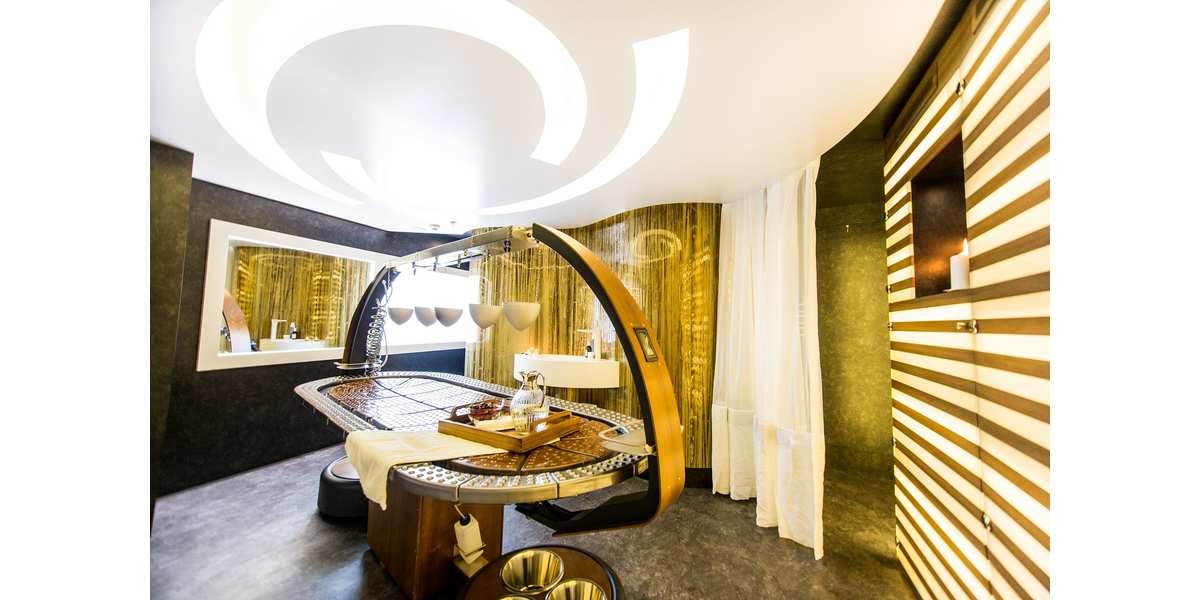 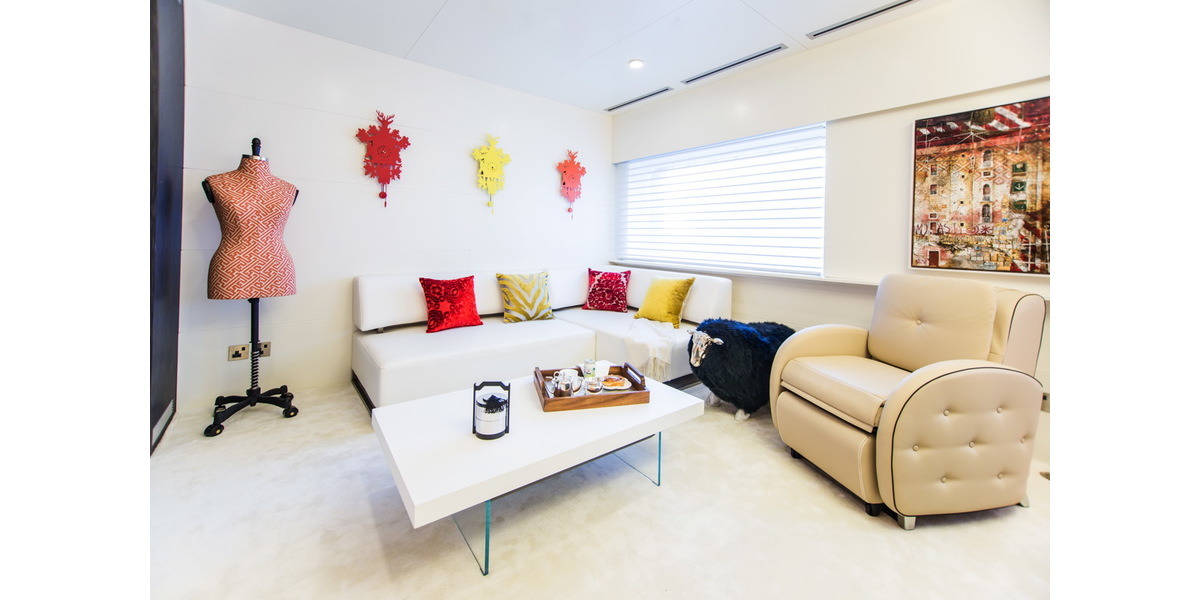 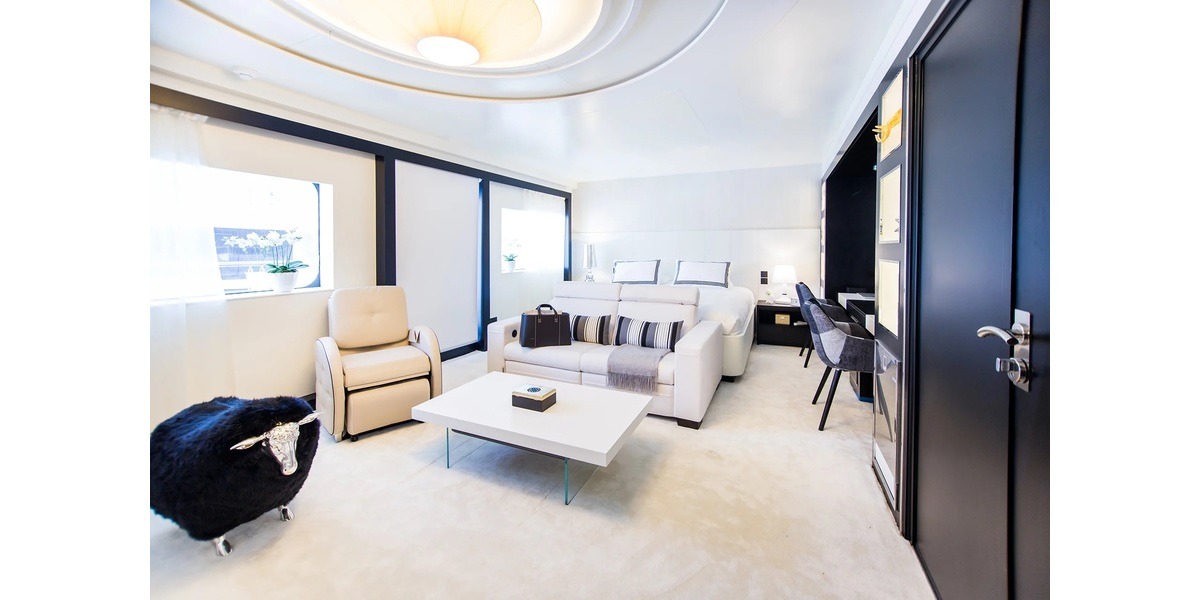 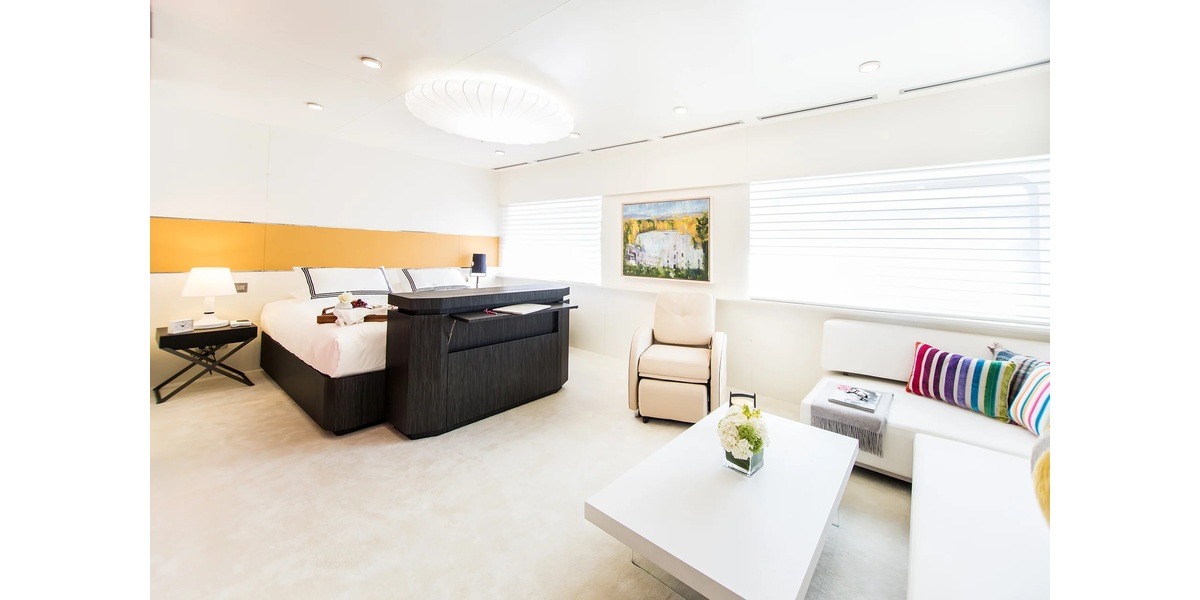 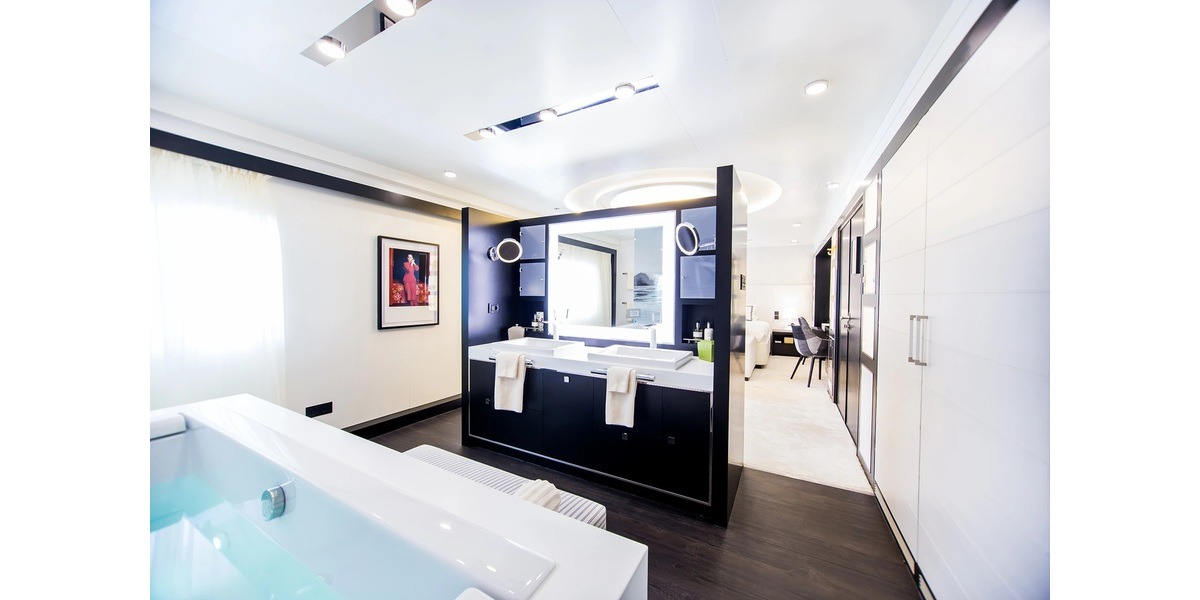 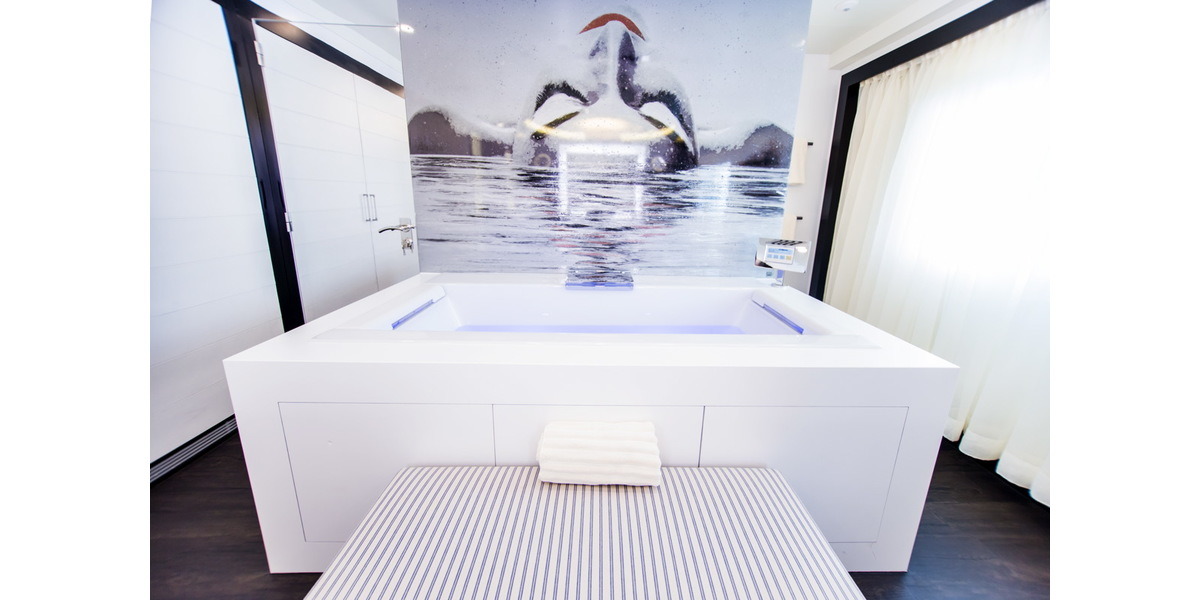 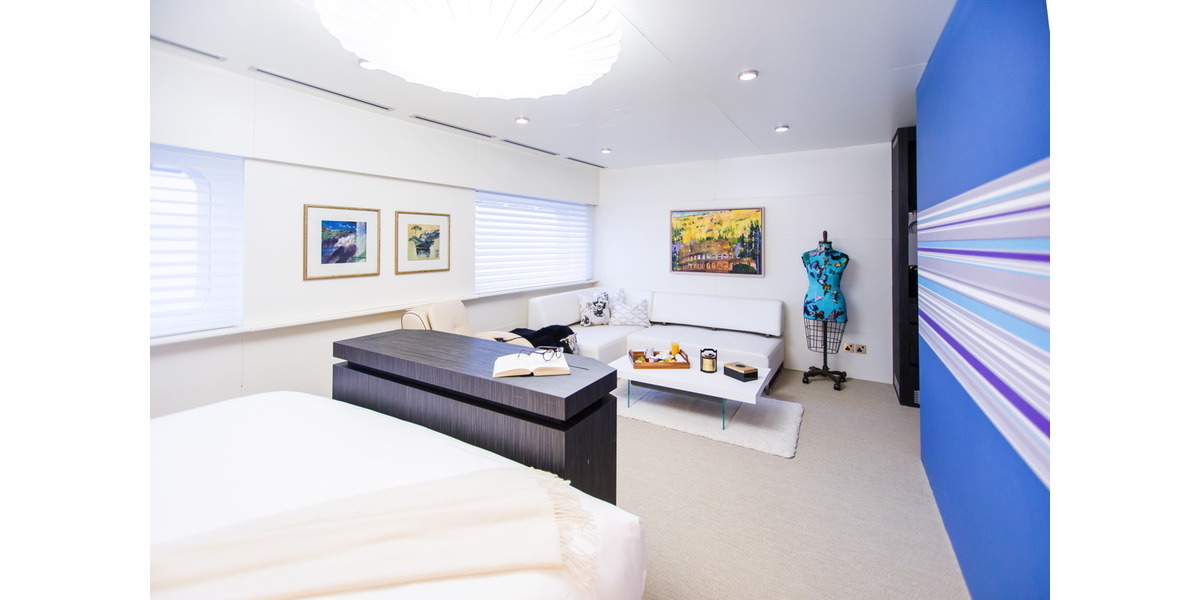 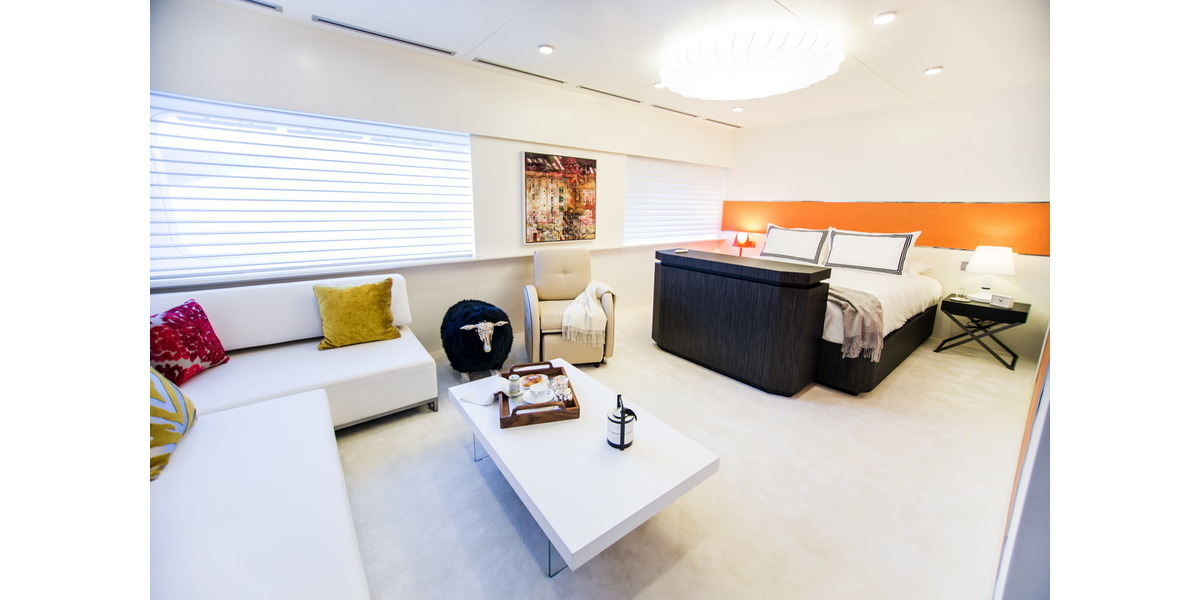 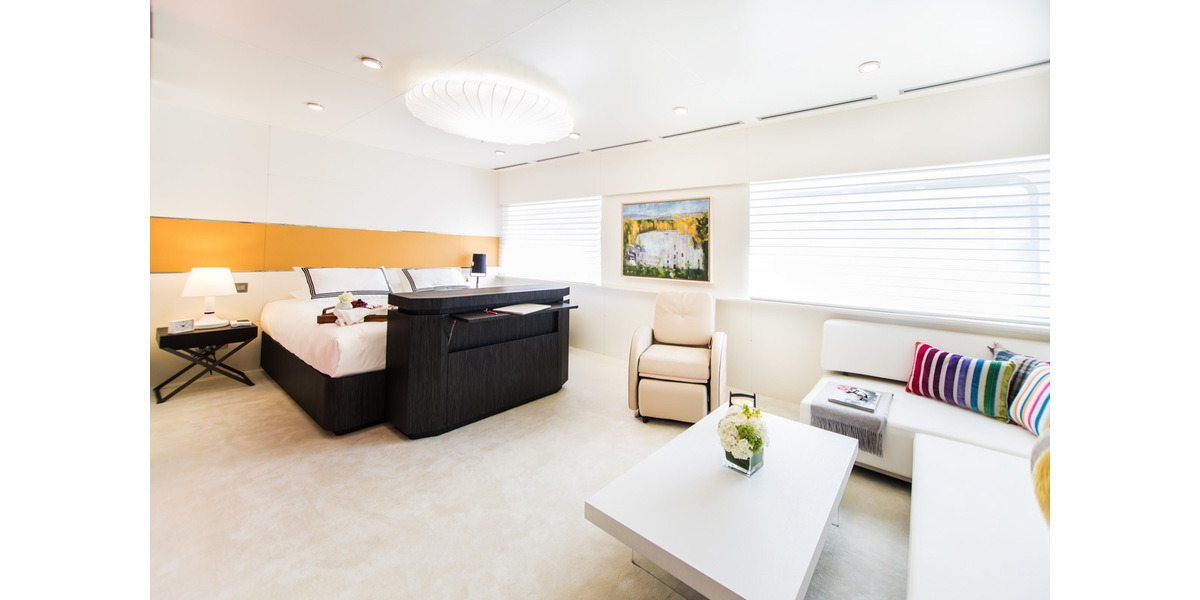 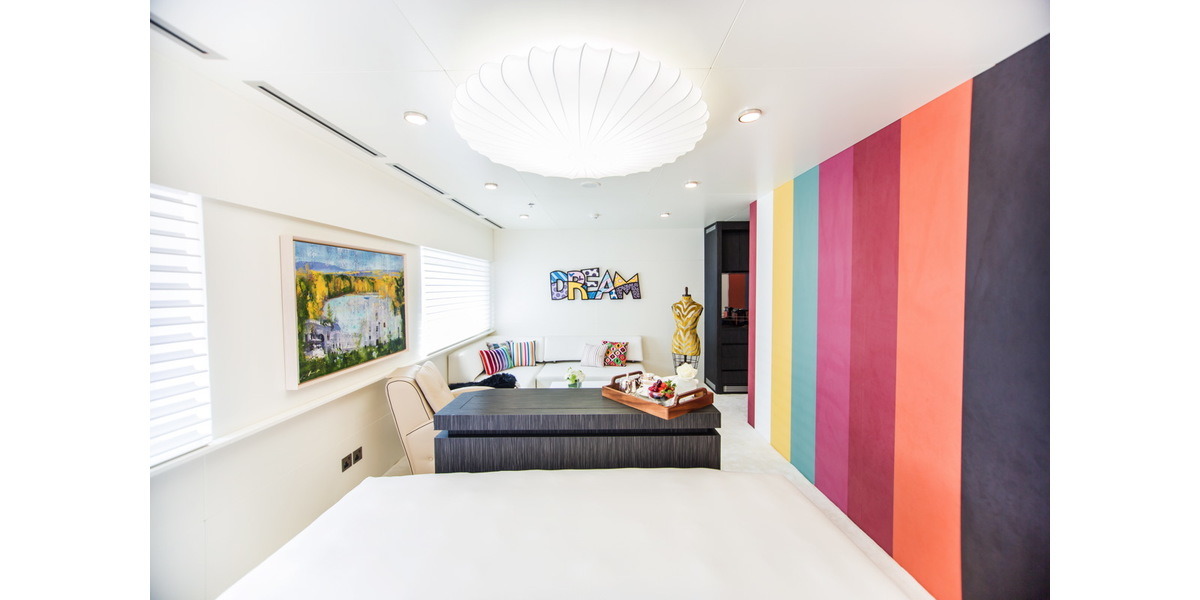 The stunning 226ft superyacht was built by Austal in 2003 and has undergone an extensive refit in 2014. At 70 metres in length and standing five decks high, the superyacht offers accommodation for 32 guests across her 16 spacious cabins. On the bridge deck, there are two master suites with their own private saloon, and on the upper deck, she boasts six VIP suites, a large saloon, gym and beauty salon. The 469 square metre main deck accommodates another VIP suite and seven further deluxe cabins, as well as the dining room, karaoke lounge and office.

Her vast and versatile deck spaces cater for entertaining on the grandest of scales and her modern, beach club décor, allows for social flexibility with friends and family.

In the evenings, the dining room not only serves as a formal dining space but can also be converted into a professional karaoke lounge. If you prefer to watch the entertainment rather than create it, retire to the top deck for a movie under the stars. Spend your time lounging around the two Jacuzzi pools on the sundeck, indulge in the spa after a session in the gym or make use of the many water toys and diving from the expansive beach club area.

Riccardo was born and lives in Viareggio on the Mediterranean coast. He is an excellent seaman with vast knowledge. He started his career at a very early age on sailing boats, sailing all over the world. In the last 25 years he joined the super yacht industry working in commercial and private mega yachts. He is very passionate about the ocean, nature and his family. When he is at home he enjoys diving, swimming and riding his motorcycle around the countryside.

Cvetan was born and raised in Varna. He graduated from the Marine Academy in Varna 26 years ago and has worked as a Marine Engineer and for the last 11 years as a Chief Engineer on passenger ships and yachts. He is a motivated, hardworking, honest and team player person.

2nd officer Joseph started working on board cruise ships in 1994 and in the yachting industry in 2002. He has been on board this superyacht for 8 years and he is one of the crew with the longest staying on board in which he is very proud of.  He always likes new adventures that make him love his sea life.

Sherilyn started working onboard in 2002, after she graduated from the University. She has worked in Luxury cruise ships, sailing ships and now in the yacht industry. Thus, being the Chief Purser in the Luxury Cruise ships, she finds the yachting industry more interesting and enjoyable. She enjoys traveling, curious and inquisitive with new places and ideas. She believes that travelling is one of the best forms of education.

Kyle has been a professional Chef for 12 years and has worked extensively around the world in many top end fine dining establishments including the Summit Ridge Lodge, Victoria and The Collection, London. He was trained in Chelsea but has travelled and worked around Australia for the most recent portion of his career. Kyle is new to the yachting industry and is very excited to further his career working aboard this stunning superyacht.

Chief stewardess Dewa was born and raised in Bali. She started her career from the age of 18. She has over 13 years' experience working in the yachting industry on various world travelling yachts.  Her hobbies include yoga (Dewa is a Yoga instructor), diving, fitness, badminton and reading.

Devon grew up in beautiful Vancouver Canada. He has found harmony in combining his two passions of service and exploration. Devon spends his free time outdoors, hiking, and enjoying various water and sports. Coming from an extensive background of service and hospitality, Devon strives for creating special memories for each guest.

Aileen is from the Philippines. She has a fantastic eye for details, a skill she has mastered during her career on high profile vessels in the past. She is well rehearsed in all aspects of the housekeeping department and loves kids, who adore her too. Aileen absolutely loves karaoke, dancing and exploring new places.

Charlotte was born and raised in Australia and began working in the hospitality industry at age 14. She enjoys the service aspect of hospitality and this led her to super-yachting where has recently joined the team.  In her free time she enjoys hiking, scuba diving and horse riding.

Jordyn was born and raised in New Zealand. She was a Manager at a 5 star wedding and events venue where she loved taking part in making people’s special days come to life. In the off seasons, she spent her time working in America as the Director of a horse riding program at a summer camp in Pennsylvania. Her love of travel combined with her love of hospitality lead her to a career in yachting. In her spare time she enjoys horse riding and water sports.

Rizza worked on land-based in UAE for five years as a professional Hairdresser, Beautician and nail Artist. With her wide-ranging experience, she explored working at sea varying from cruise ship, offshore vessel and superyachts for seven years. She finds yachting more enjoyable and has given her more knowledge working in different aspects of Interior.

Hairdresser Vilma worked as a Hairdresser/Nail Technician in Dubai for over 12 years and joined the team in 2016. Since then, she enjoys yachting and loves to see different places and meeting new people. During her past time, she loved to do hair braiding and creating nail arts.

Vincent has been working on famous cruise ships for eighteen years. Although new to yachting industry, his five star standard service and professional skills are highly appreciated and welcomed by Interior team

Joanes recently joined the team as laundry steward. He has a great background in housekeeping after working 17 years in the cruise ship industry as a cabin steward and laundryman. He enjoys singing and playing drunks in his spare time.

Perkins has worked on cruise ships before and was looking for a more luxurious career path on super yachts. He has been with this superyacht as IT officer since 2016. He enjoys travelling the world and watching football in his spare time.

Chief engineer Cvetan was born and raised in Varna. He graduated from the Marine Academy in Varna 26 years ago and has worked as a Marine Engineer and for the last 11 years as a Chief Engineer on passenger ships and yachts. He is a motivated, hardworking, honest and team player person.

Boris lives in Varna. He has 15 years of experience working on various cargo vessels, cruise ships and super-yachts. In 2013, he joined the team and became a reliable member of the Engine team. During his vacation, he loves fishing and exploring nature while travelling.

Ray has been on the yacht for six years and has extensive background from cruise ships. At home, he likes to look after his wife and his 3 kids of 4, 9 and 11 years old.

After his time at the Maritime University, Christian joined an exploration cruise onboard which he travelled all around the world. He has been on the yacht for 3 years. He lives in Mindanao, Southern part of the Philippines.

Josh grew up near the beach on the south coast of South Africa, he has always had a passion for the ocean. Surfing, sailing and freediving are his three favorite water activities. Since a young age, Josh loves being creative and constructive with his hands and has focused on being a carpenter since the first time he played in sawdust. Working onboard this yacht allows Josh to follow his passion for the ocean and use his carpentry skills when it is needed.

Karina is an avid kite-border, scuba diver and traveller who has been living overseas in Australia and New Zealand for the last 5 years. Karina has worked with children from a young age, as a swim instructor, lifeguard, dive and wake board instructor. In the last year, Karina has decided to change her career path from a high school English and sports teacher, to a deckhand and water sports instructor in the yachting industry.

Johnneson has been working on 5 different yachts before joining the team this superyacht. He is living near Manilla in the Philippines and he is the father of an 8-year old girl.

Before joining the yachting industry, Jayson was running a meat packing business near Cebu in the Philippines. At home, he enjoys the seaside lifestyle and goes often to the beach with his family.

Carpenter Sergio has been on board since 2002. He proved to be the longest staying crew since he witnessed the launching of the yacht. Respected by all crew for his generosity and efficiency.  Back in the Philippines, he enjoys spending time with his family and his metal-scraping business.

Ramon has been working at sea for 21 years, both on cruise ships and yachts. He is a father of four and at home he enjoys spending time with his family along the Northern part of Luzon in the Philippines.

Edgar was a Service Technician for a ship engine manufacturer before he joined the yachting industry. He has been working on this superyacht for eight years as an Electrician. A father of two girls, at home, he likes to spend his free time singing in karaoke or listening to rock music.

Joel has been working on different cruise ships for the last seven years. He joined the team beginning of 2017 where he enjoys the new challenges of working on a super-yacht. Back in the Philippines, he enjoys spending time with family in the city of Manila.

Edrian is a young and dynamic galley hand. He joined the team 2 years ago after a first experience on a cruise ship. He comes from Manilla in the Philippines, where he enjoys family life and managing several food stall businesses.