Going to a long sea campaign, trade or military, people want to enlist the support of the heavenly patron. Maybe he will not forget, send Turkish and pirate ships to search for prey to other seas, take the storm and storms and return unharmed to the port. So the medieval sailors of the Bay of Kotor thought, throwing another stone in the sea in front of the city of Perast. 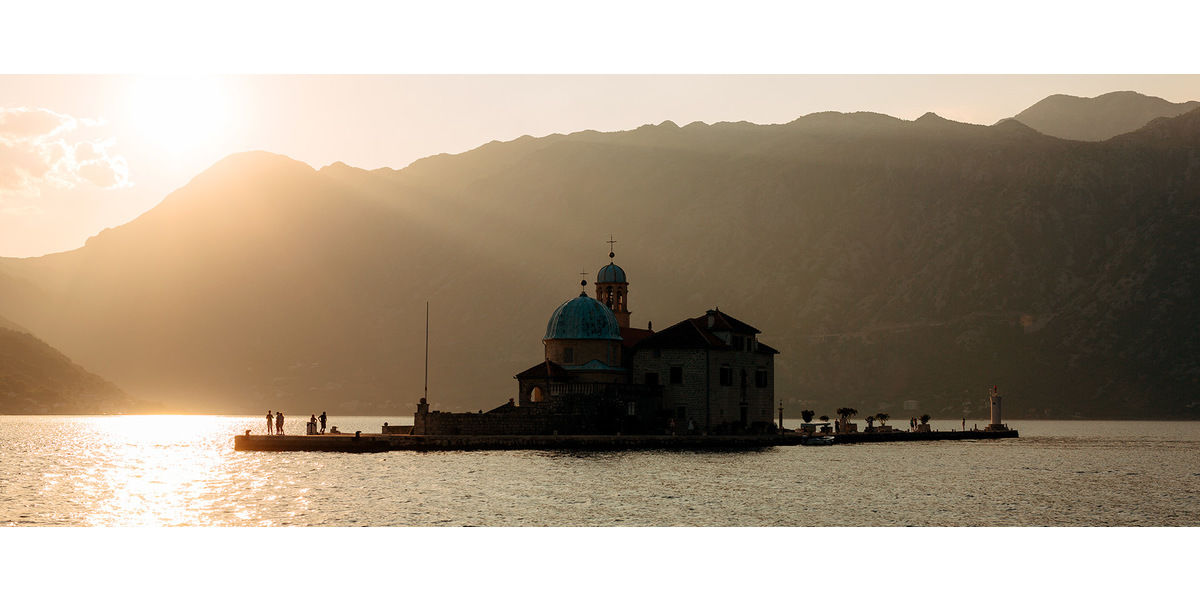 In the interior of the Bay of Kotor, behind the Verige Strait, opposite the city of Perast, there are two islands in the sea. One of them is St. George, hiding behind the cypresses Benedictine abbey, the other is the island of Our Lady. The Mother of God on the reef, or Gospa od Skrpel (the local name is utterly unpronounceable), is a man-made island peppered with sailors for its defender - icons of the Mother of God.

In the 15th century, there was no island on this place, only the top of the reef was barely visible above the surface of the sea, which the sailors cautiously avoided. One rainy July night fishermen from Perast, returning from the sea with a rich catch, saw on the reef an icon of the Mother of God. They brought the icon ashore and wondered what the Mother of God was sending them for a sign? Maybe she wants a church built for her on that reef? How to build, if there is no island? Have to pour it.

So the acquisition in the middle of the XV century of the icon of the Mother of God was the beginning of a long-term - two hundred years - project of creation a new man-made island in the Bay of Kotor. First, the stones were taken to the reef by small fishing boats, but you cannot sketch a lot on the stone. Then they began to fill with stones their own old or captured Turkish ships and flooded by the reef - the tree eventually collapsed, and the stones became more and more. The captains, who were returning from the trade voyages lightly, were obliged to fill the overseas stones with holds-and for the stability of the ship it was good, and the common good was useful.

In the 17th century, the last stone was thrown into the sea. The surface of the island was three thousand square meters. In the same XVII century on the island was erected a church of light stone under a turquoise dome. They called Tripoli Kokolyu - the best painter of Perast - to paint the church with frescoes. Ten years later, from sixty-eight canvases, the biblical prophets and Greek sibyls studied instructively on the prayers, the holy fathers of the church blessed, the Holy Spirit condescended, the Mother of God was born and repose. Soon an altar was delivered from Genoa. Made of the best varieties of Italian marble, he raised above the praying icon, found once on a reef and finally found his home.

None of the locals do not go to sea without prayer before this icon. Preparing for another trip, the sailor came to the Mother of God on a reef and prayed for help. If he returned alive, he walked straight to the goldsmith in Kotor and described everything that happened to him in the distant seas. The jeweler carefully beat out the story on a silver plaque and the sailor was returning with a gift to the island. The interior of the church is girdled with a silver frieze - this is the gratitude of the Mariners of the Virgin for their help. There are more than two thousand silver tablets in the church. Those who did not have a sign, but wanted to donate something, began to bring pictures and utensils to the island. These objects are filled with a small museum at the church. Keep in mind, you will be admitted to the church for free, but if you want to look into the museum, then at the entrance you will have to pay 1 euro - the fact is that you can get to the museum only through the church altar.

With the beginning of spring, when the Adriatic Sea ceases to heave up strong winter winds, cruise liners appear in the Bay of Kotor. Captains of "skyscrapers", who know about the Bokel defender, bypass the island of Our Lady, greet it and then the priest rushes to the bell tower and responds to the greeting of the bell.

For several centuries, every year on July 22, a string of festively decorated boats stretches to the island - flags flutter, music is heard - it's Fashinad - a holiday of island pouring. Young men From Perast row on the oars, women and old people traditionally follow the order on the shore. Men ask the Mother of God and continue to help the seafarers, do not forget to take away the dangers. They throw stones at the sea for all sailors, because not only the locals need the help of the heavenly patron.