Raja Ampat archiveplago consists of over 600 small islands and more than 900 shoal, cays and islets. The marine life biodiversity in Raja Ampat is one of highest recorded on earth. No wonder, Raja Ampat scuba diving has gained a reputation as being amongst the finest in the world. It was recently awarded the # 1 snorkeling location on earth by CNN Travel. 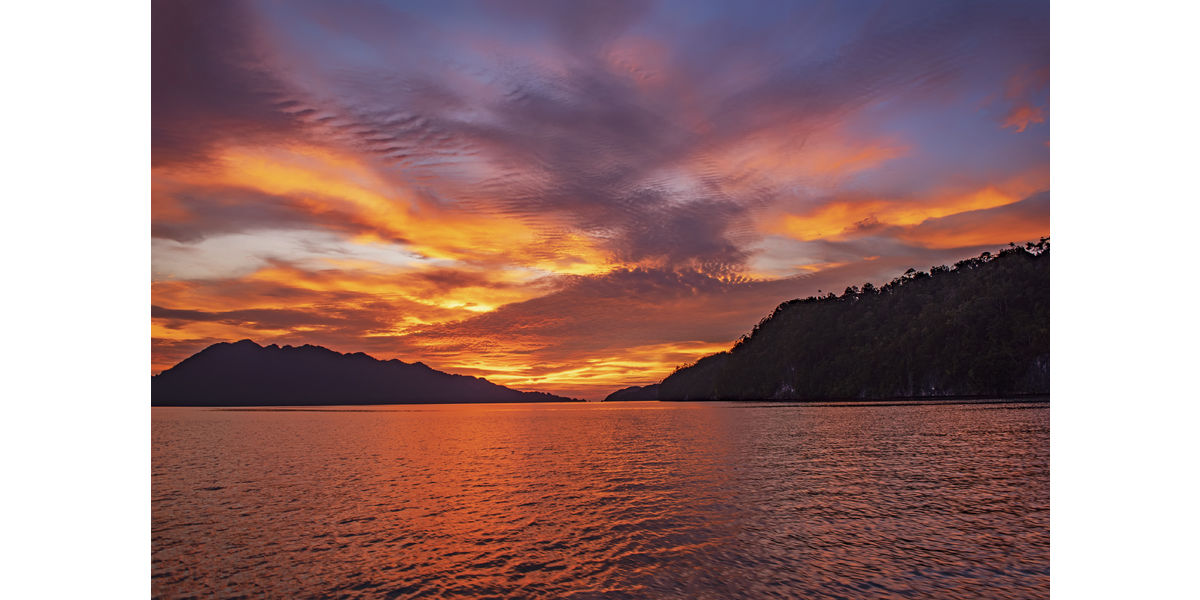 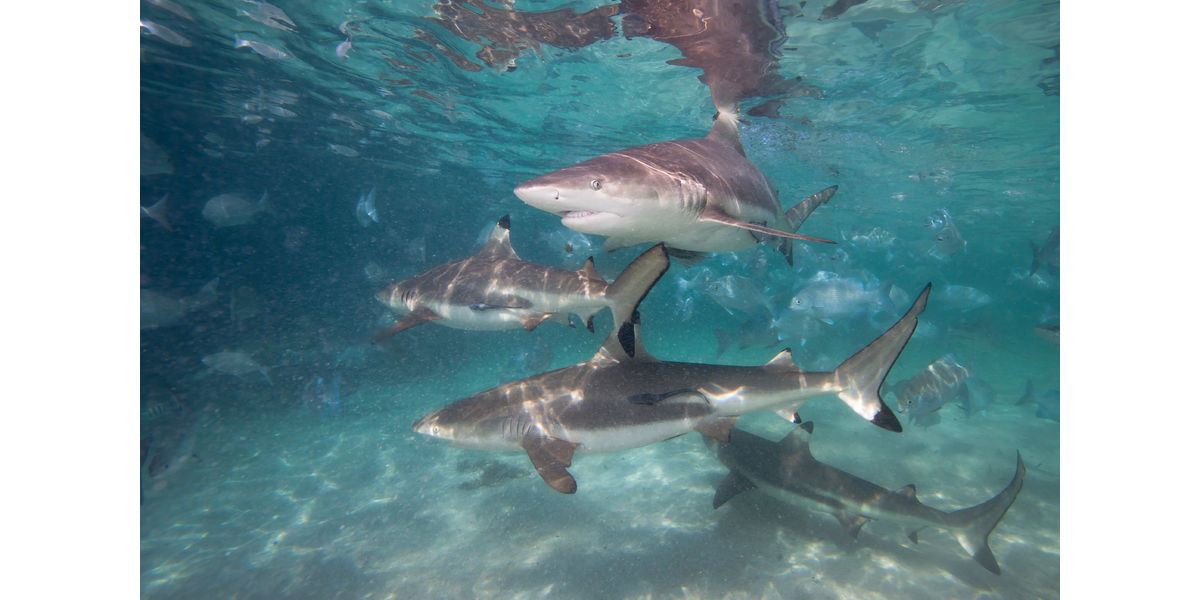 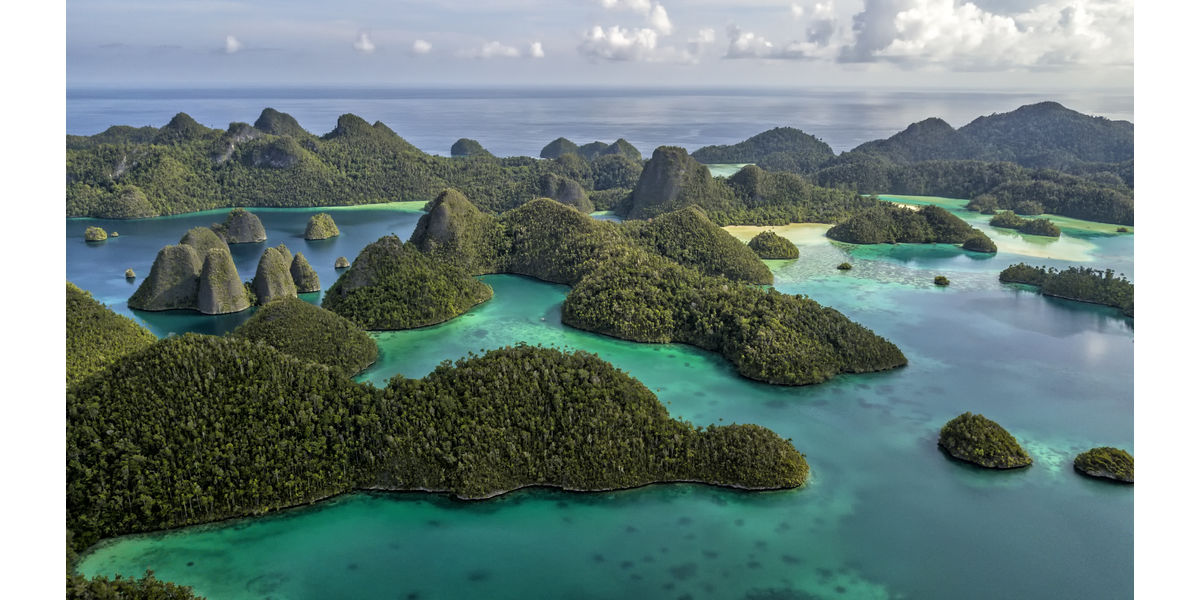 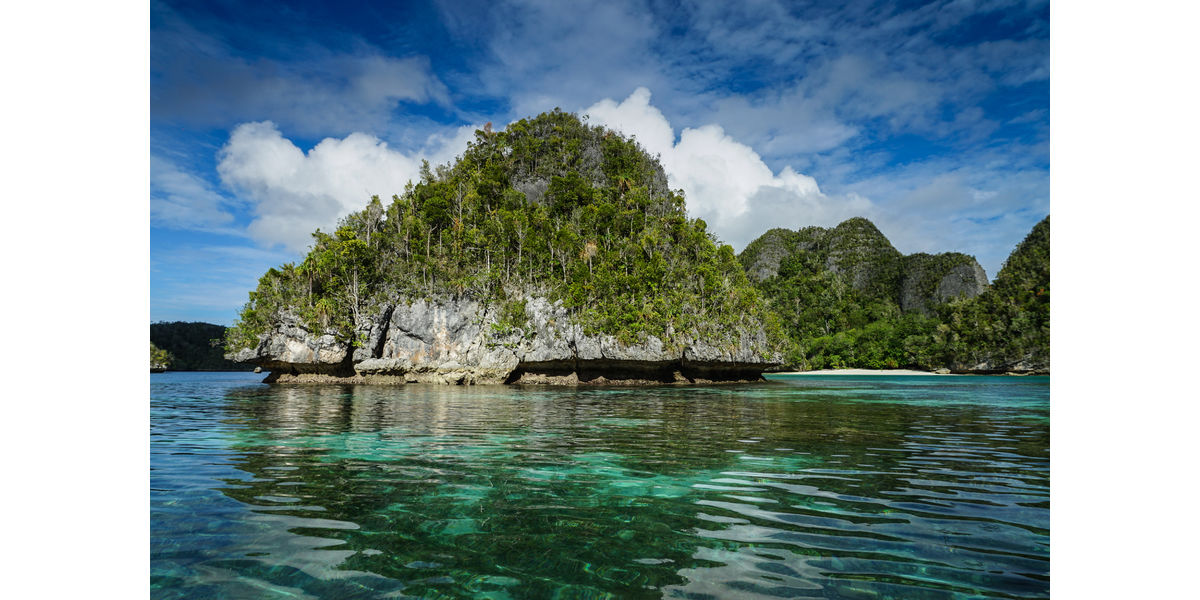 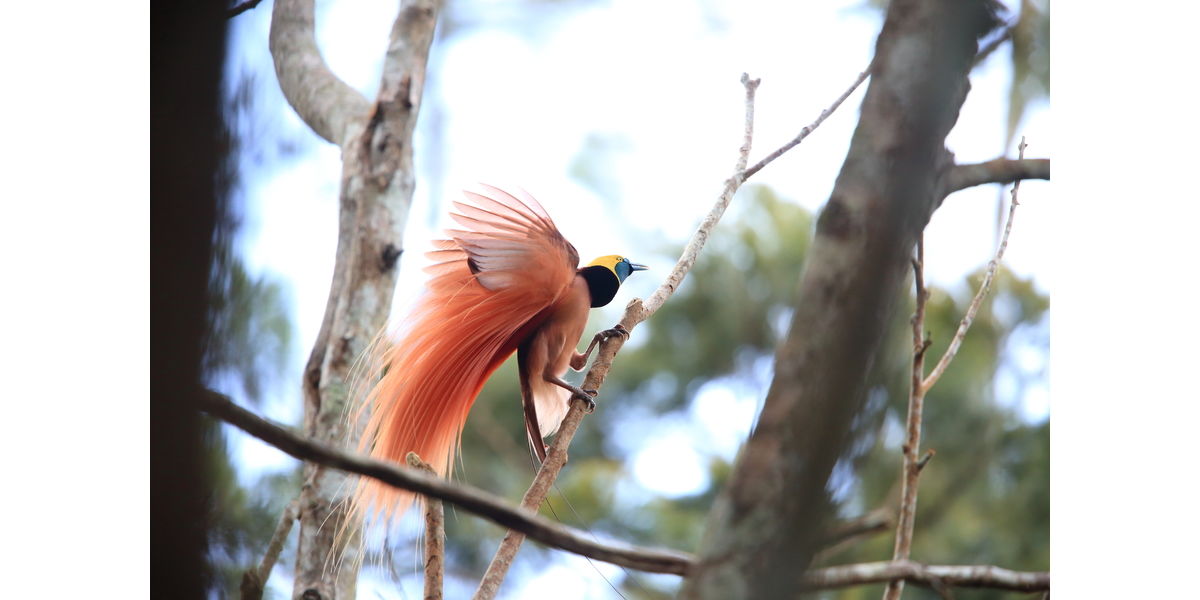 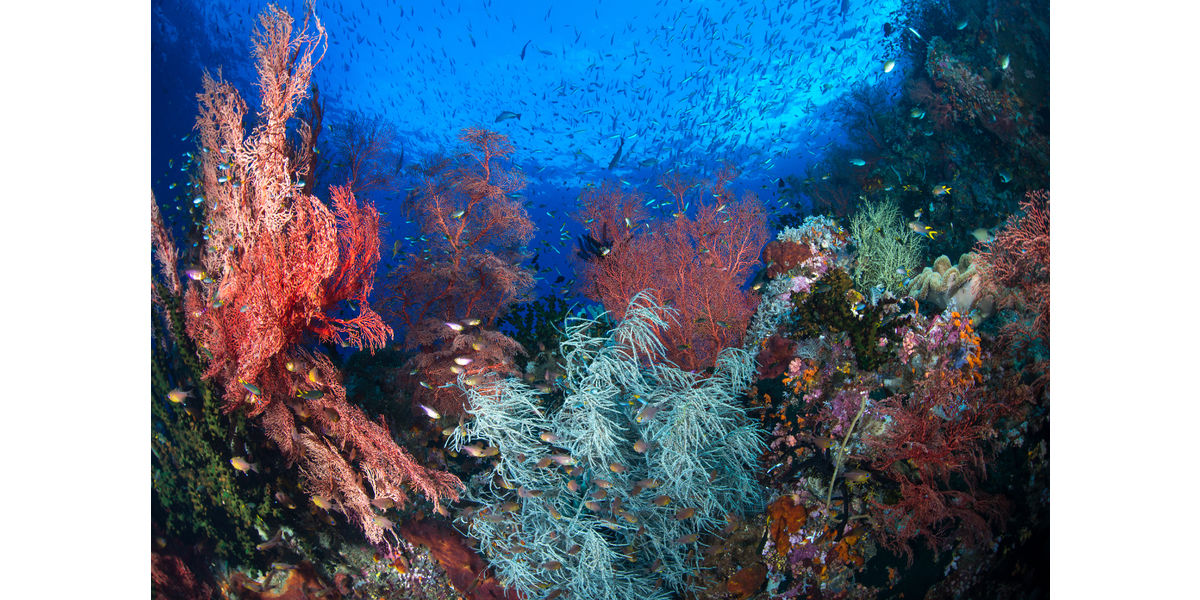 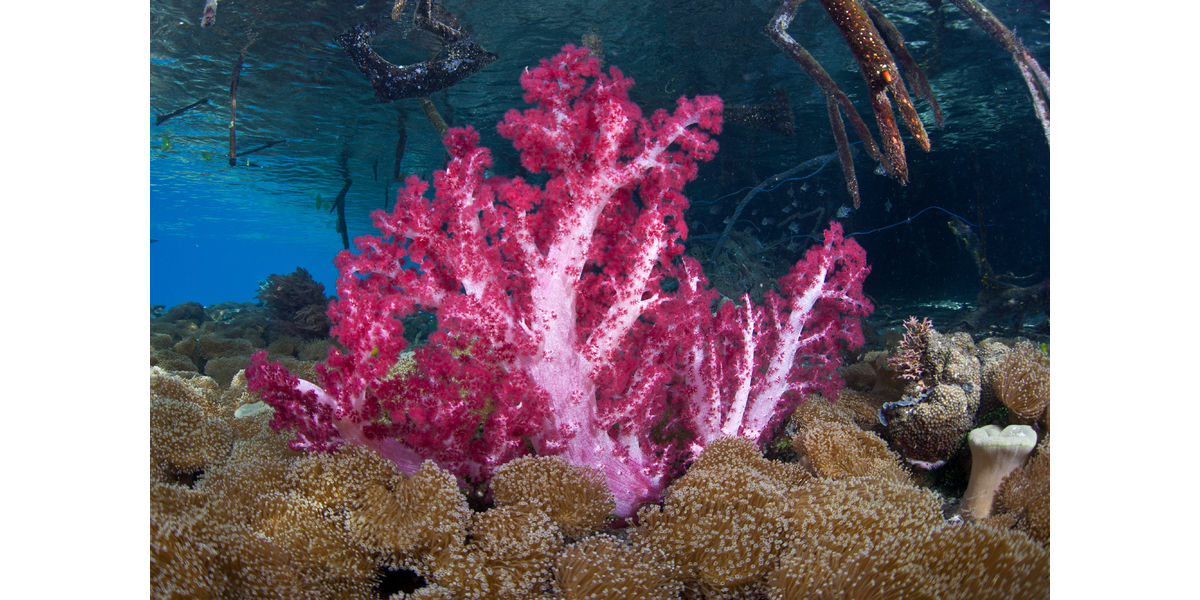 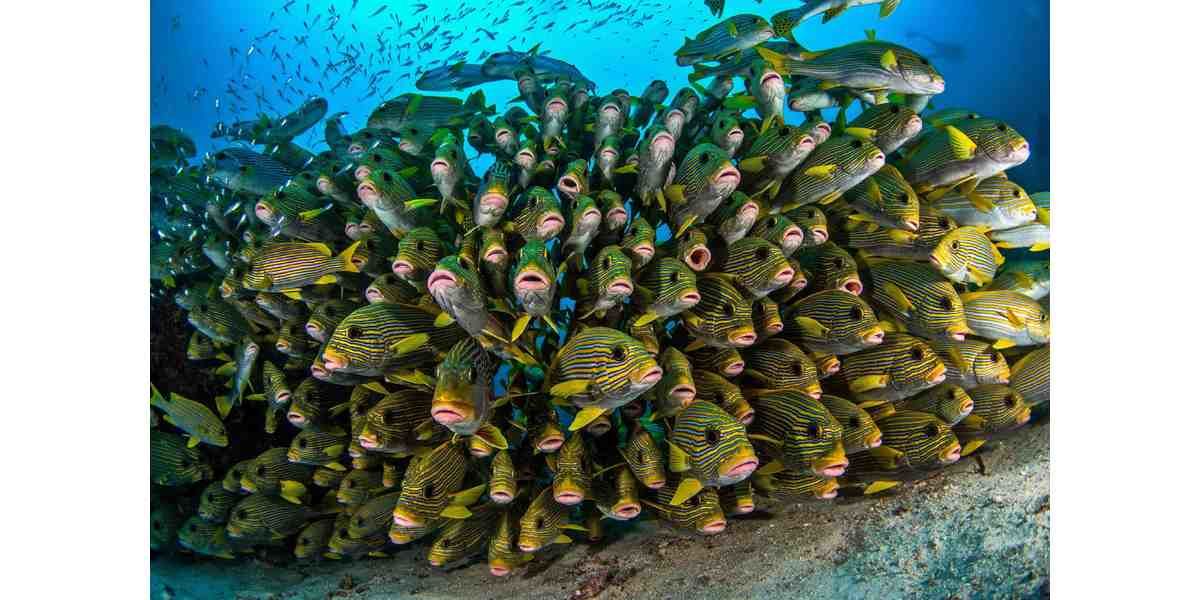 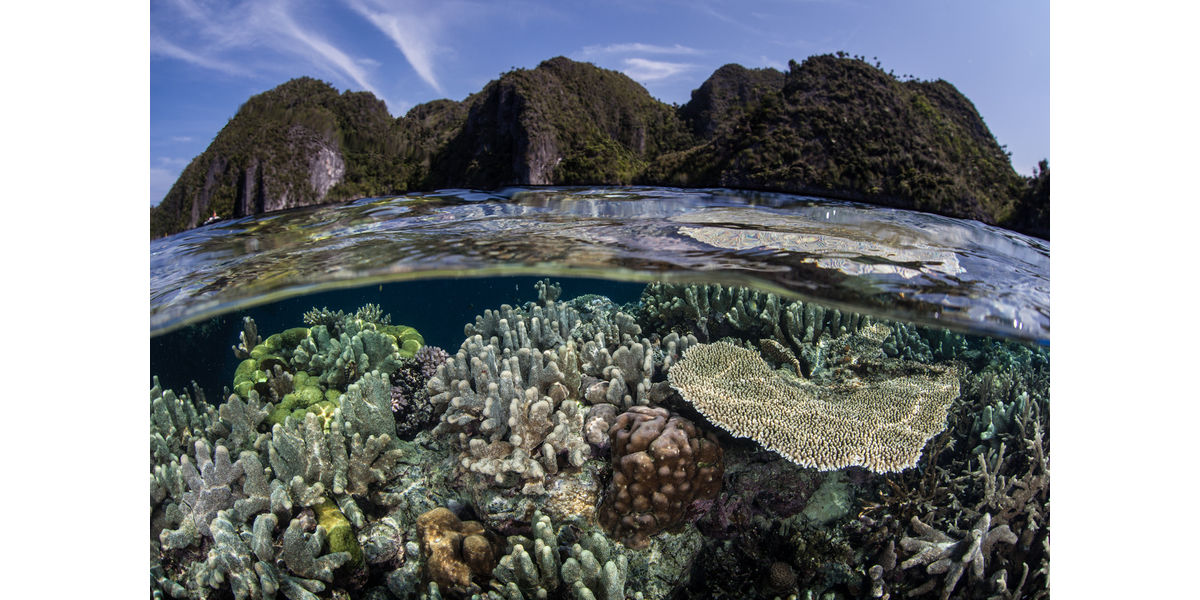 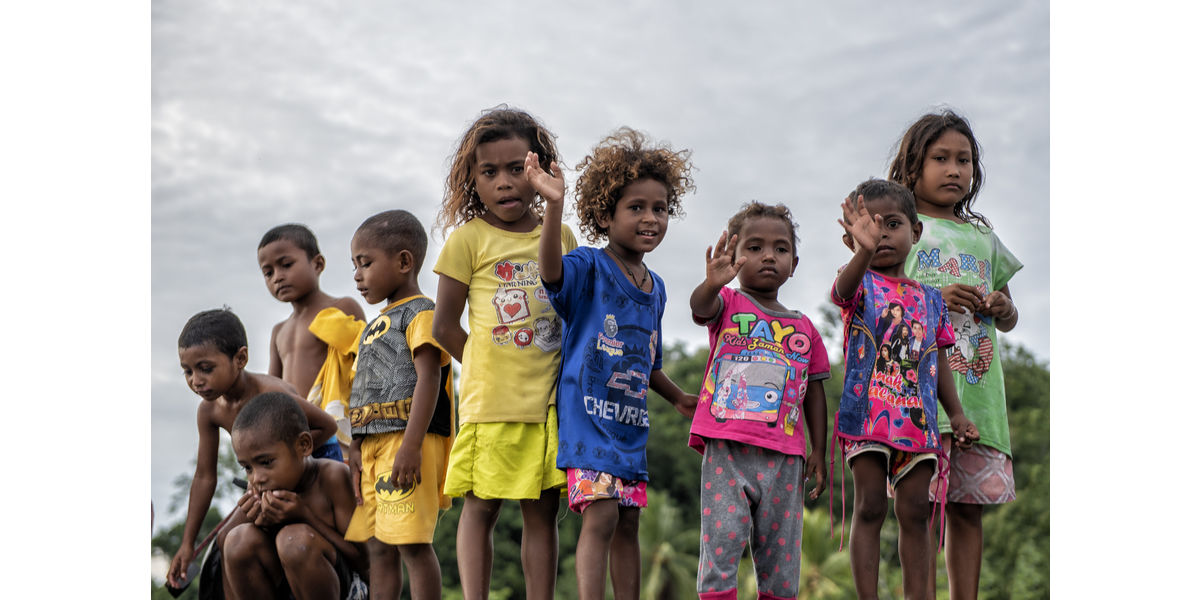 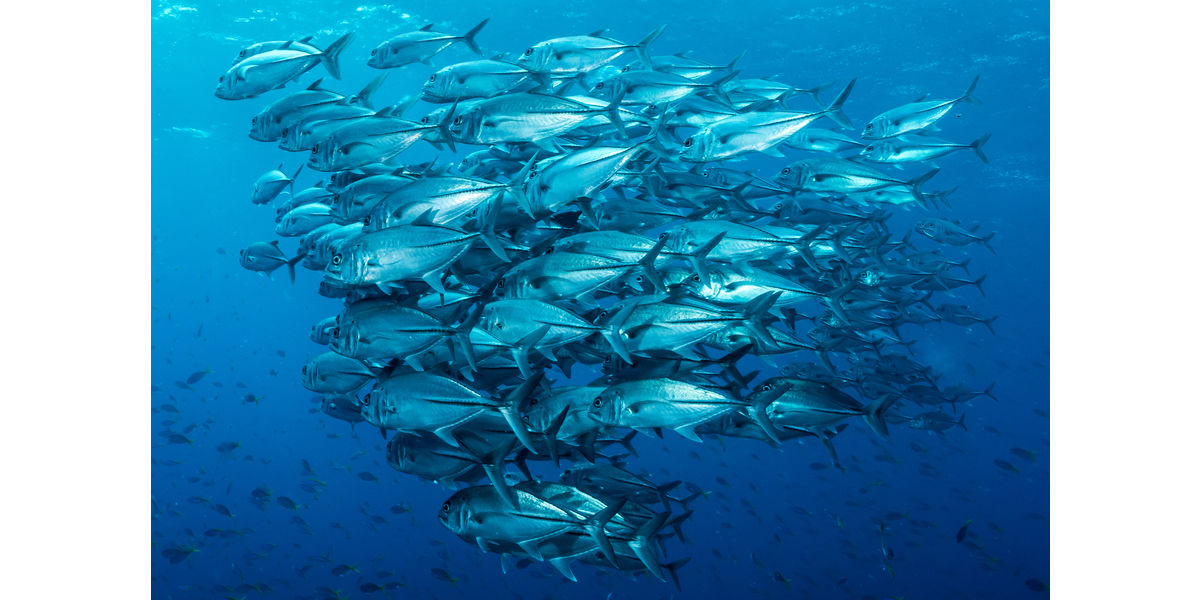 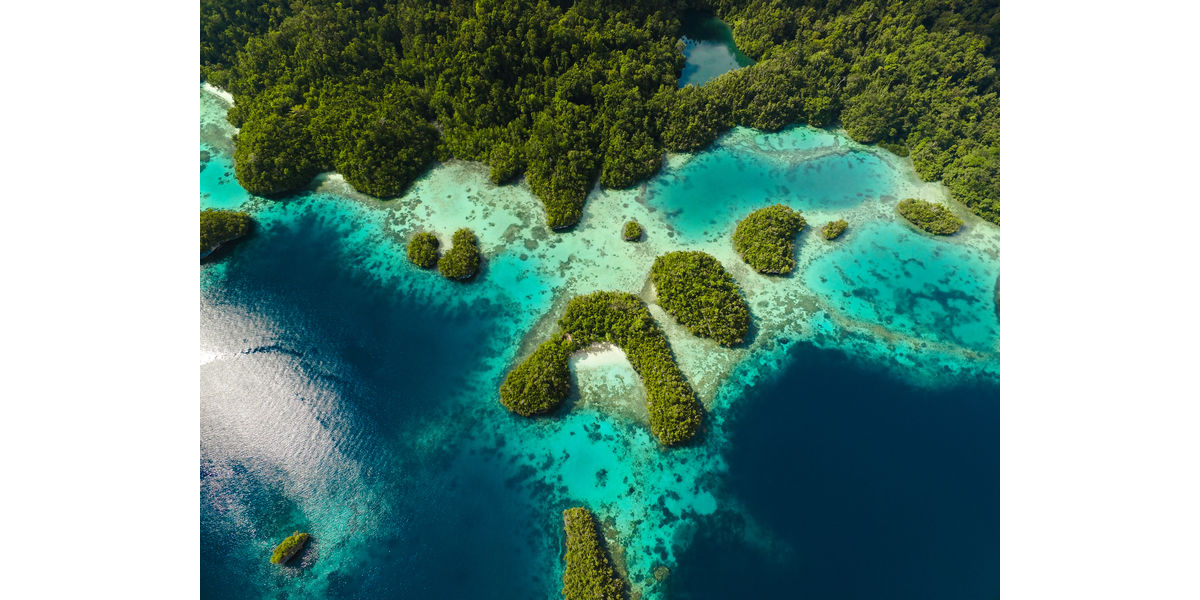 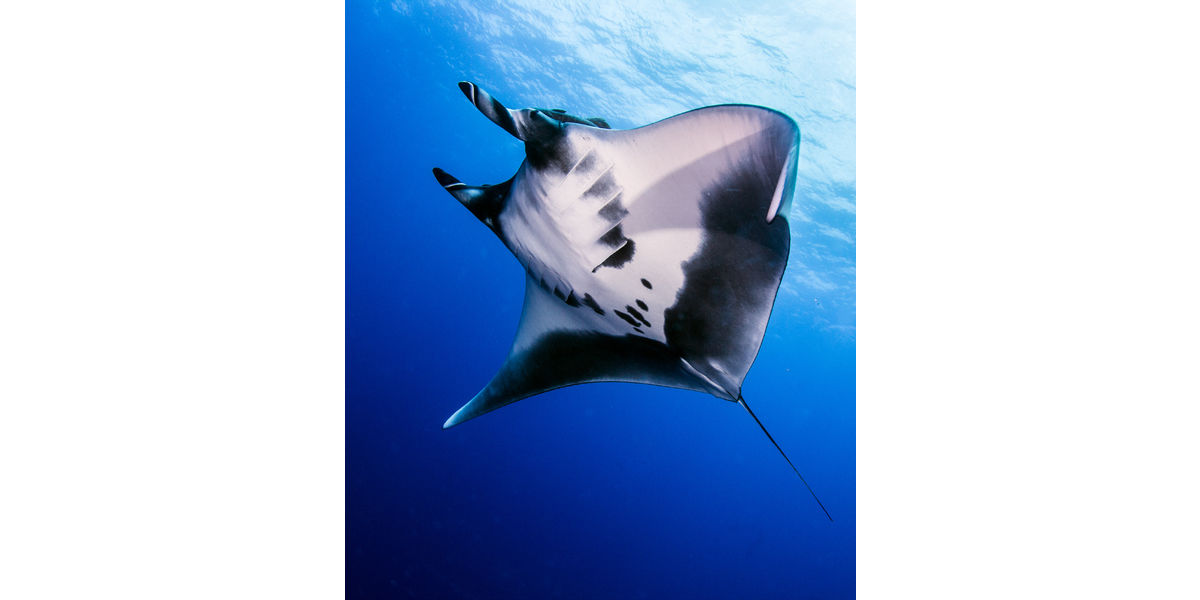 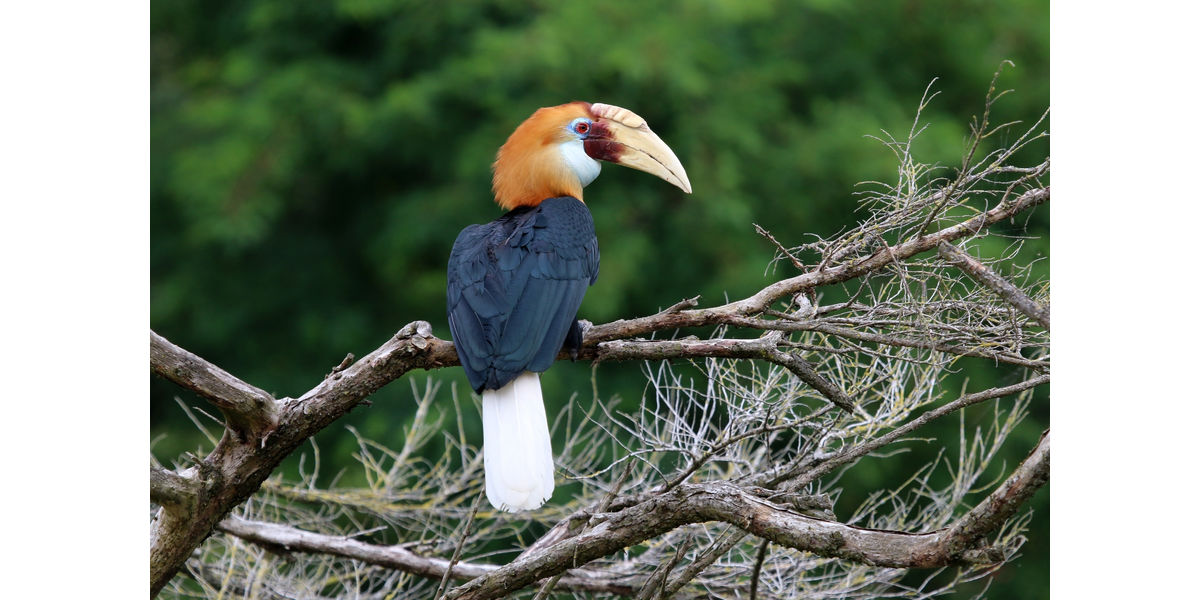 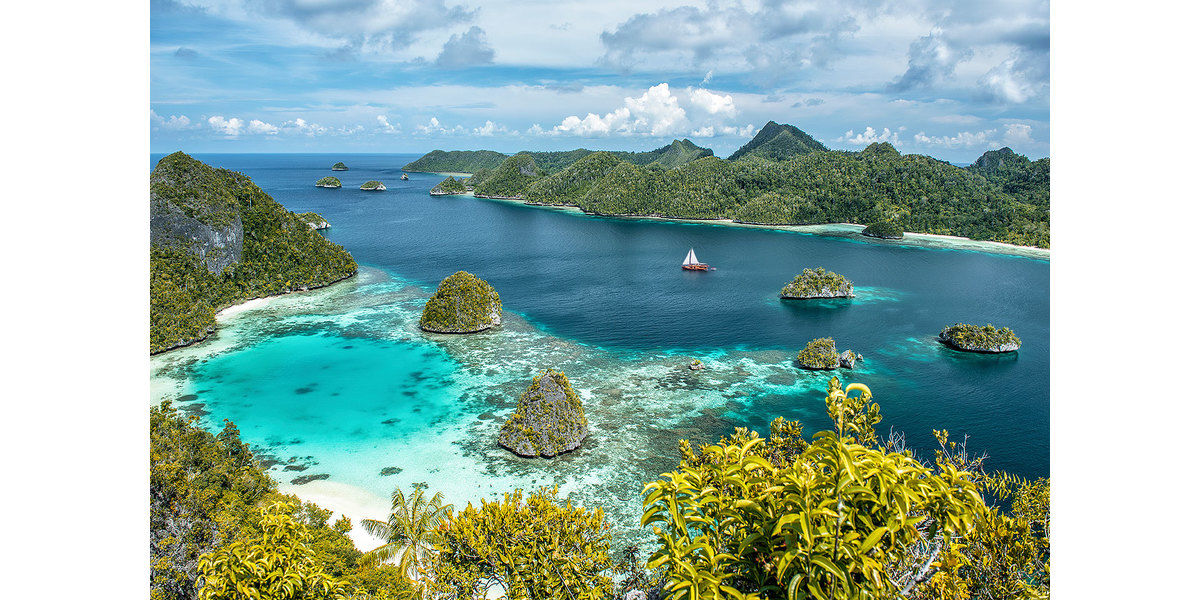 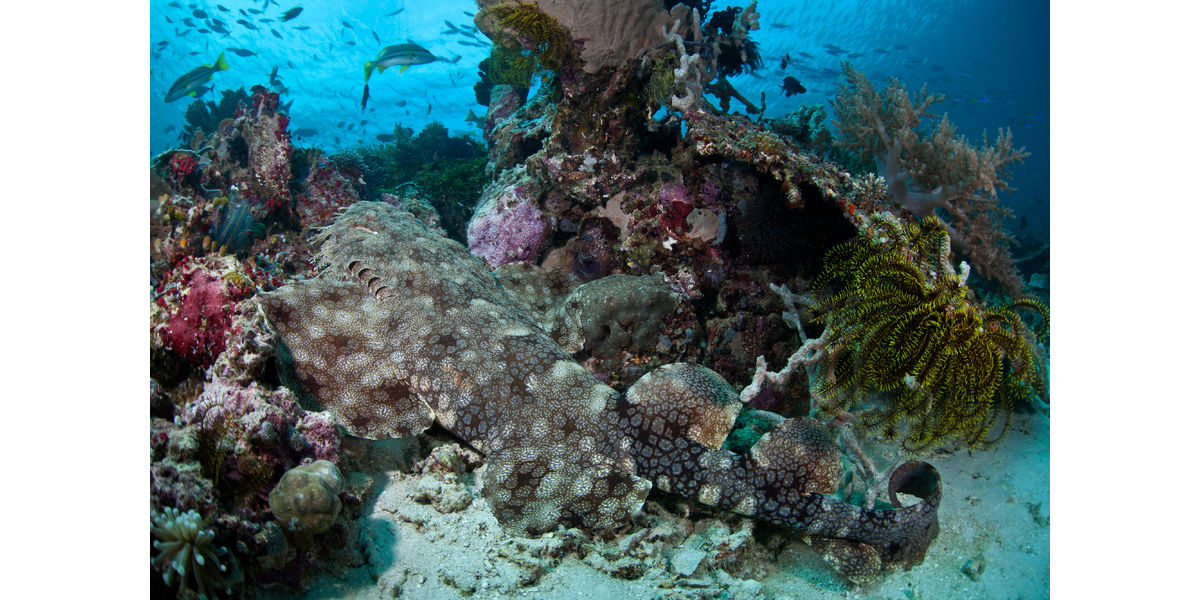 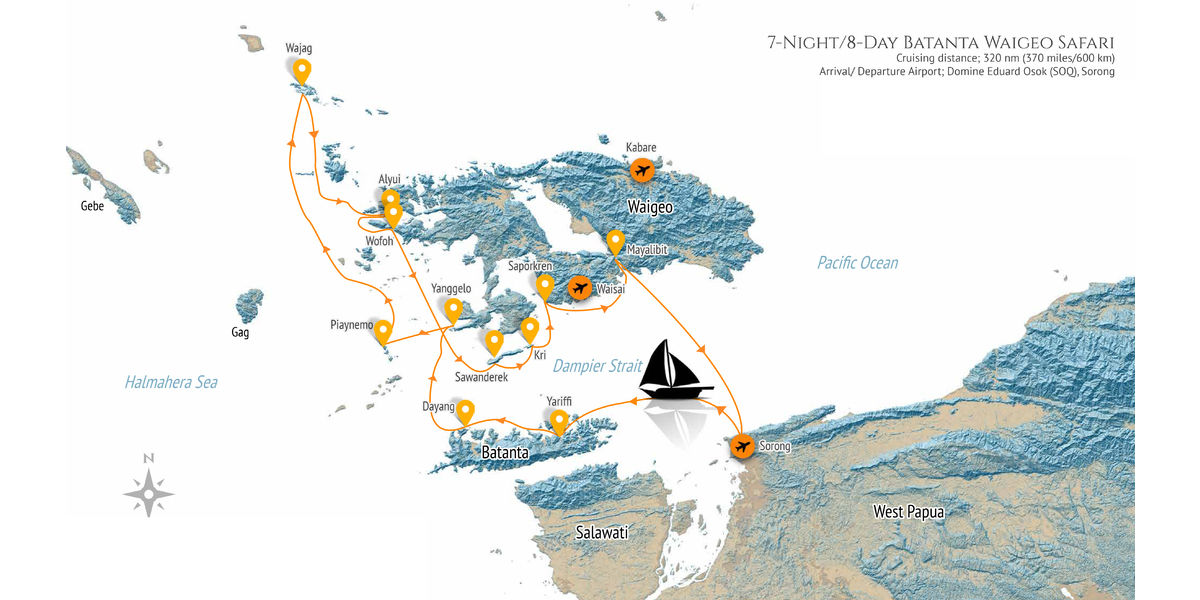 Myth-enshrined ancestors form the basis of Papua’s modern social structure.“Raja” means King, while “Ampat” means four. According to the legend, eggs laid by the mega bird of Waigeo hatched into four fabled kings who settled the region’s four biggest islands, from north to south; Waigeo, Salawati, Batanta and Misool. These four kings fathered Raja Ampat’s original people, the Maya. A stone egg enshrined in a Mayalibit Bay lends a sliver of truth to this myth.

This archipelago is comprised of 600 islands, as well as an additional 900 more shoals and islets. Blue water mangroves connect most of this region’s shallow sandy bottoms. This area of 40,000 km2 / 15,444 miles2, is 7 times the size of the “Island of Gods”, Bali. The best time to visit is October to April when the sea is calmer and the visibility is optimal.

Known as the “Amazon of the Sea”, it is home to 533 out 798 known coral species, which is 75% of world coral species. You will come face-to-face with up to 1,437 reef fish species in every direction. Here you may also encounter with more than 700 species of mollusk including 7 species of giant clam, as well as 2,300 known species of Nudibranch, which means naked gills, and describes the feathery gills and horns that appear on their backs.

A traditional celebratory dance will welcome you to Yariffi. Batanta has the most untouched blue water mangroves within Raja Ampat. Take a speedboat ride to the tranquil mangrove, and later take a one hour trek to take in a spectacular view of the 80m/ 260ft War Inkabom waterfall. On the top of trees are Cuscus, Butterflies, and Iridescent Dragonflies. You can enjoy a sunset cruise to see migrating Papuan Hornbill at Yum or Wruwarez island.

Located on the edge of Batanta is Dayang island where majestic Black Manta Rays gather for cleaning. They can reach up to 6 m/ 20 ft wingspan and you can see them from the top as you snorkel this shallow calm sea. Dive to explore 5 of U.S Air Force’s P47 aircraft wreck that crashed at Wai island during World War II. On a short sail to Birie island, you may also swim with the Dugong or seacow which is similar to the “Manatee” feeding on the sea grass.

Indonesia has by far the world’s largest population of mangrove trees including the only “blue water” mangrove. Unlike mangroves elsewhere in the world, these mudflats are not built up, so the water is crystal clear. This permits lots of light to penetrate to the bottom of the hard and soft multi-coloured corals where endemic Wobbegong “Kalabia” Sharks and Papuan Epaulette Walking Sharks are hidden. “Colourful Mayhem” and “Citrus Ridge” dive sites are great to snorkel or dive.

Even a region as remote as Raja Ampat has its final frontier. The Wajag islands protect the entire Raja Ampat area from the currents of the Pacific Ocean. You can hike up Pindito peak with the reward of a spectacular view of the turquoise lagoons bordering the South Pacific. Later, you can snorkel and/or swim with baby sharks and/or baby manta. Relish the calm waters by Kayak, stand up paddle board or water ski while enjoying a spectacular equatorial sunset.

Home to the Atlas Pearl farm is the tranquil fjord of Alyui. Learn how to farm and harvest precious South Sea pearls. You can explore the fjord to see wildlife including Cockatoo, Parrots, Hornbills, Dolphins, and the legendary salt water Crocodile. Here, a wide variety of plants such as Ferns, Orchids, Palms, and insect eating Pitcher Plants are abundant. Enjoy the spectacular sunset followed by a jetty night dive which offers one of the finest night dives in the archipelago.

Wofoh is referred as the “Mirror of the Ocean” because of the clarity of the water and beaches. Here, you can explore “Edi Black Forest” and “Red Patch” wall dive sites. You can expect to see one of the most extensive gardens of Elephant Ear Sponges and Black Corals blanketed in Baitfish. Mandarin fish and Halimeda Ghost Pipefish make these sites home. All you need is a mask, fins and snorkel.

A perfect day begins as you enter Sawanderek wooden jetty. Although it is very shallow 4 m/ 16 ft, you will be blown away by spectacular hard corals and tons of fishes of any colour, size, and shape. There are Trevally, Batfish, Snapper, Damsel Fish, Giant Sweet Lips, and Oriental Sweet Lips as well as huge Sea Turtles. A little deeper at around 10 m/ 33 ft in front of the jetty, you will find one of the largest Giant Clams in the world. You may also enjoy a walk to a school in the village.

Located in the Dampier Strait, Kri is home to some of the world’s best dive sites including “Cape Kri”. It is recorded scientifically as Raja Ampat’s “fishiest sites”, with large schools of Trevally, Barracuda as well as large concentrations of Banner-fish, Sweetlips, Napoleon and Snappers. The largest fish on earth “The Whale-Sharks” are also seen here. End your day with a fine walk on a pristine sandbank.

Waigeo is densely covered in a lush rainforest with Danai mountain rising up to 978 m/ 3,200 ft. This topography allows for clouds to settle and generate rain on a nearly daily basis feeding the rivers, including blue river “Kali Biru”, waterfalls, and trees. On a trek through Saporkren forest you will have the chance to see the exotic mating dance and songs of the Greater Bird of Paradise, Red Bird of Paradise, as well as the one and only “Wilson” Bird of Paradise.

Myth-enshrined ancestors form the basis of Papua’s modern social structure. According to the legend, eggs laid by the mega bird of Waigeo hatched into four fabled kings. These four kings fathered Raja Ampat’s original people, the Maya. The stone egg enshrined in a Mayalibit Bay lends a sliver of truth to this myth. A visit to these authentic remote villages will allow you to learn how life here depends on our precious rainforest and reefs.